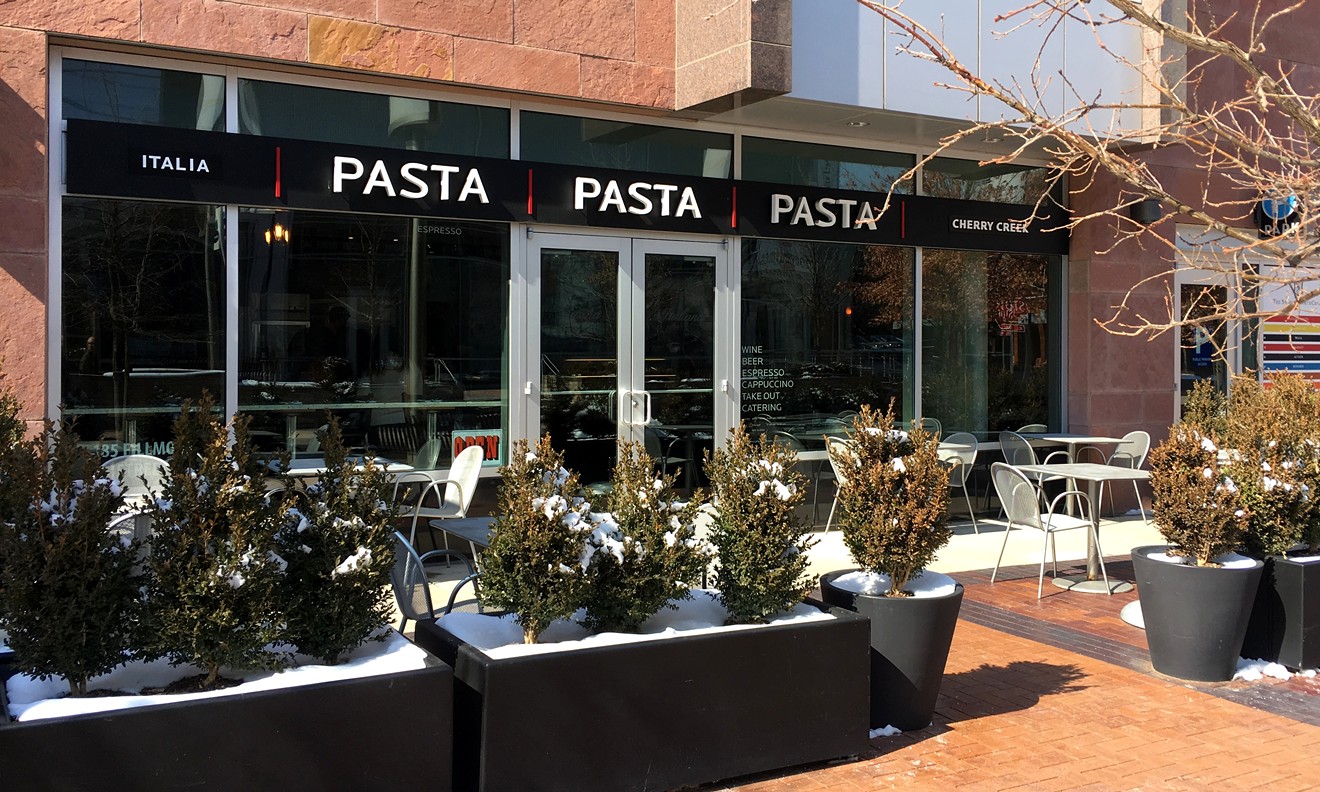 Pasta Pasta Pasta is once again open in Cherry Creek North. Mark Antonation
For the past couple of years, Cherry Creek North has been morphing from a boutique shopping neighborhood filled with independent retailers and restaurants to a miniature version of downtown, complete with hotels, offices, restaurant chains, condos...and traffic congestion. Lost in the shuffle are the little eateries that previously occupied hidden grottos and side-street storefronts, but one such place has shown remarkable tenacity. Pasta Pasta Pasta just reopened under new owners.

Up until a few weeks ago, the Italian lunch spot and market was owned by Lisa Miller and Franco Tronchin, but the couple closed and sold the restaurant at 185 Fillmore Street in January. New owner Vittorio Gallinari (a name European basketball fans might recognize) and his family reopened Pasta Pasta Pasta last week with a similar menu and concept. Hot pasta dishes, entrees, salads and panini are served during the day, and there's also an emphasis on takeout packages and catering. And, as at the original, the specialty is housemade pasta (pasta, pasta). Weekly specials are posted on the menu board, and a deli counter displays what's fresh on any given day.

Pasta Pasta Pasta's lasagna comes swimming in a lake of tangy tomato sauce.
Mark Antonation
Unlike the original, the new incarnation won't close before dinner. The restaurant will be open from 11 a.m. to 7 p.m. Monday through Thursday, and from 11 a.m. to 9 p.m. Friday and Saturday; a small board of Italian wines and beers will be on offer for your after-work stop.

Pasta Pasta Pasta began its life at 278 Fillmore Street before moving to 2800 East Second Avenue in 2010. Fillmore Plaza was rebuilt in 2011, and the restaurant's address became 185 Fillmore Street with the reconfiguration of the mixed-use building in which it is located.

The restaurant is in the process of creating a website; for now, you can get details and place orders by calling 303-377-2782.
KEEP WESTWORD FREE... Since we started Westword, it has been defined as the free, independent voice of Denver, and we'd like to keep it that way. With local media under siege, it's more important than ever for us to rally support behind funding our local journalism. You can help by participating in our "I Support" program, allowing us to keep offering readers access to our incisive coverage of local news, food and culture with no paywalls.
Make a one-time donation today for as little as $1.