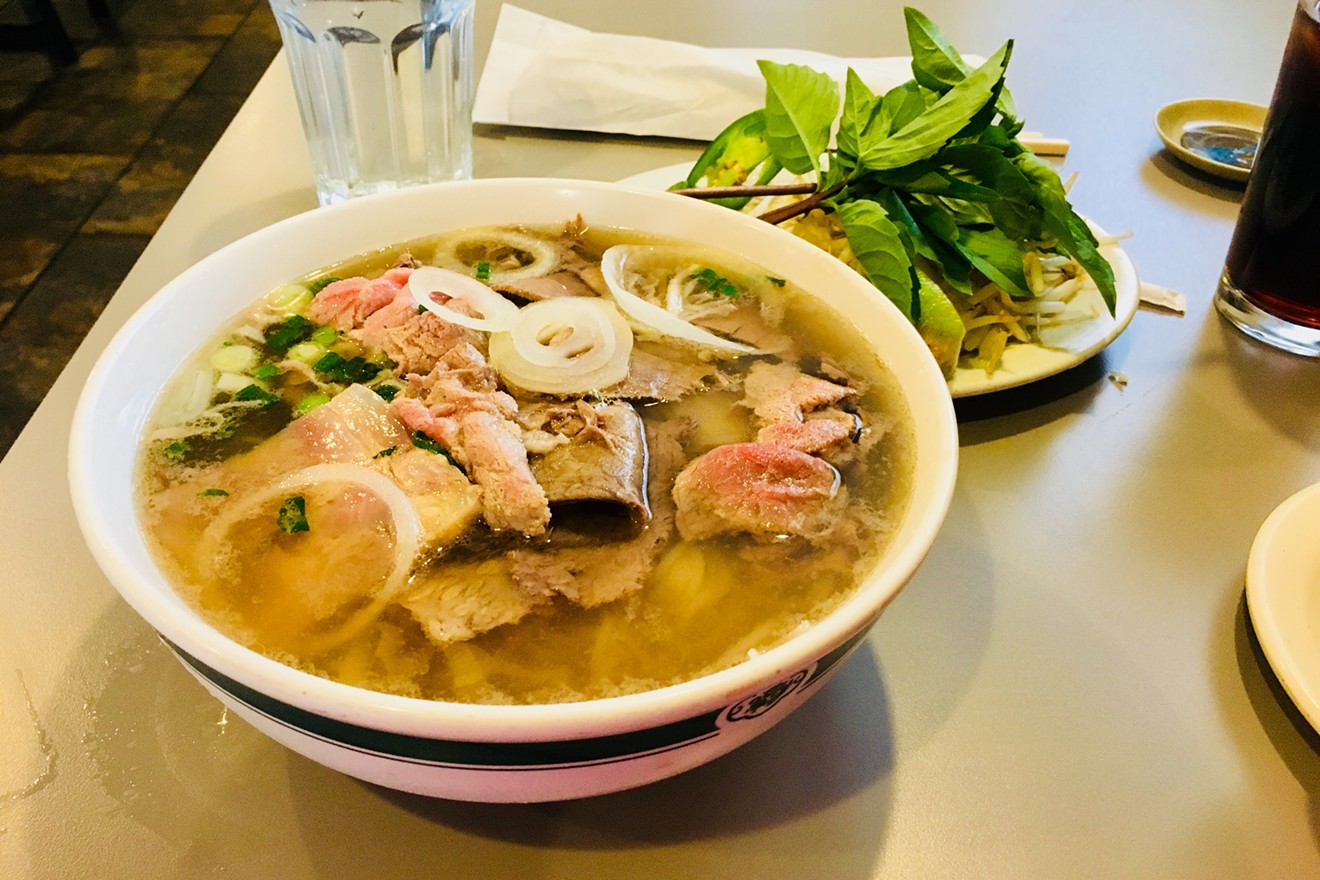 The medium-sized pho that comes with Pho 99's lunch special is more than enough food. Maureen Witten
“Tasting pho is very much like tasting wine,” explains Mickey Ha, owner of Pho 99 at 1090 South Havana Street in Aurora. “If you taste the broth first, you can enjoy its various flavors and aromas. This way, you can also better assess the amount of accompanying herbs and sauces you will add to produce the flavor you are looking for.”

I didn't know that the first time I had pho with my husband about ten years ago, and I’ll never forget the look on the waiter’s face when I asked him for soy sauce immediately after he placed a bowl of pho in front of me. He looked as if he was holding back his urge to slap me — and so did my husband. Rightly so, since a copious amount of time and effort goes into pho broth, and many consider it rude to start dumping sauces into the soup before trying it first.

I've since learned to sample first (without getting slapped, even) — a good habit to have developed before visiting Ha's noodle shop, because tasting the pho broth prior to adding anything to the soup clued me in to the quality and time the chef at Pho 99 puts into this beefy dish long before it hits the table.

“We’ve been following the same recipe for seventeen years, and even though we feel that we’ve finally mastered it enough to have a consistent flavor every time it’s served, we still taste the broth every two hours to make sure it tastes right,” the owner adds.

A simple spring roll comes with the pho lunch special.
Maureen Witten
The broth exuded a bouquet of beef and was indeed very savory with umami goodness — not at all watered down, as some broths are. I had a hunch that more than a few beef-speckled bones and aromatics had spent some quality time bathing in the broth before it was ladled over the meat and noodles in my bowl. There was no need to add the typical condiments — hoisin and sriracha — to this pho; the broth stands on its own without any help from the ubiquitous rooster. In fact, I was almost sorry I’d even added jalapeños, since its spice diminished the meaty, earthy character of the soup. I could see why another restaurateur had paid Ha good money for the Pho 99 name and recipes to open a second Pho 99 location in Littleton.

I’d ordered the dine-in lunch special that includes a medium-sized choice pho, a spring roll and a fountain drink for $9.95. The No. 8 pho contains five different cuts of tender, succulent meat: flank, rare steak, brisket, tripe and tendon. I allowed the thinly sliced raw steak, flank and brisket to soak up the beefy broth while I slurped for a while, then dug in. Like the broth, the cooked meats tasted like they’d been simmering for a lengthy amount of time. The steak, brisket and flank were fall-apart tender, and the tripe and tendon added some texture and interest to the soup. Since the meats weren’t tough, I thankfully avoided that embarrassing moment where I look like a carnivorous dinosaur thrashing my head from side to side in an attempt to rip off an appropriately-sized bite from a dry rubbery hunk of meat held in my chopsticks, as I have in some of my past pho experiences.

The basil and bean sprouts were fresh, though the limes were spotted and browning all over. The combination spring roll contained pork and shrimp on top of a large helping of rice noodles and lettuce. The shiny sweet peanut sauce jazzed up the rolls quite a bit and was a welcome accompaniment. While I probably wouldn’t go out of my way to order the spring roll as an appetizer on its own ($3.95), it was a very appreciated addition to the lunch special, since I arrived hungry and received it almost immediately after putting my order in.

On my first visit, seating was an issue. There’s no real hostess stand since this is a casual cafeteria-style eatery. When you walk into the front of the restaurant, you’ll notice that the register is across the room and there’s no staff or signs signaling you to seat yourself. It can be a bit confusing for the first-timer; I recommend simply walking to the register to get the attention of a server before seating yourself, so that they know you’re there. I ended up sitting by the front door and felt the urge to help other bewildered customers who walked in the door as I had, a little confused about how to get a table. Fish balls, shrimp, mussels and other accompaniments for the seafood pho.
Maureen Witten
On my second visit, I didn’t want to mess with seating and decided to take my pho to go. I ordered the seafood pho ($12.95) because I was curious about how the meat and seafood pho broths would differ. I did confirm with the owner after ordering, however, that the base of the two soups is the same, but that there are a few additions to the seafood pho that make it taste slightly different. One of those additions, from what I could discern, was panko-fried onion — I found several floating in the broth before adding in the fish and vegetables from my takeout box. The usual bean sprouts, jalapeño, sauces and lime slices were included alongside a large piece of green leaf lettuce in place of the typical basil sprigs; all of the veggies were fresh and crisp this time around.

For the seafood, I found three distinct types of sliced and whole meatballs accompanying the broth, as well as mussels, shrimp and a few pieces of imitation crab. Chewy, rubbery white-fish meatballs yielded a mild flavor of unidentifiable fish; pink-flecked crab meatballs with a fried panko coating were much more tender, with a sweet, oniony flavor; and orange-hued shrimp meatballs contained bits of spicy red pepper. Giant pieces of garlic and a few small pieces of onion skin bobbed in the broth, but not enough to be a meal-wrecker. In fact, it was validation of the flavor complexity that I thought I was tasting in the broth on my first visit. After all, pho is nothing if not a tasty treasure hunt of complex, intertwined ingredients, some of which flavor the broth and some of which provide texture when excavating layers of floating noodles.

Beyond pho, the restaurant offers bowls of rice or noodles topped with grilled meats ($8.45-$10.95), and bánh mì ($4.95) available for carryout only, with chicken, pork or beef fillings. If you feel like venturing out of your pho comfort zone, Ha recommends the five-spice noodle soup ($10.95), which comes with pork, beef brisket, flank, tendon and chopped pork feet in a spicy lemongrass broth with rice noodles. There's also a large selection of  specialty beverages such as boba drinks ($4), Vietnamese lemonade and limeade ($3.50), Vietnamese coffee ($3.50) and egg milk soda ($3.50), but no alcoholic beverages. Desserts include mocha cake, mochi ice cream and Vietnamese pudding.

Pho 99 isn't much to look at from the outside, but there's good soup inside.
Maureen Witten
Pho 99’s menu is simple, but the flavors are complex. With so many pho restaurants popping up all over Denver, serving quality, time-tested broth is key to staying competitive, and Pho 99 has been a go-to pho restaurant for locals since 2007. The cafeteria-style environment and friendly, judgment-free wait staff make newcomers comfortable in the bustling dining room. Honestly, nobody really notices or cares how you take your pho, but if you’re a pho-saucer like myself, I advise you to taste your broth first before you sauce — not for fear of embarrassing your dining companions, but because otherwise you’ll be missing out on a delectably meaty, slurp-tastic experience.