The name Pistol Whip is definitely assertive, but this is the only signage on the whole building. Mark Antonation
Tattoo artist and businessman John Slaughter picked the name Pistol Whip for his new restaurant at 698 Santa Fe Drive because he wanted to catch people's attention, to present something edgy and artistic in a neighborhood known for being edgy and artistic. But Pistol Whip, when it officially opens on Wednesday, May 1, will be much more approachable than the name implies.

Slaughter has owned and operated Tribe Tattoo, on the same block as Pistol Whip, for nearly two decades, but he didn't want his restaurant to look like his tattoo studio. Instead, the new space is airy and modern, combining the ambience of a posh downtown eatery with that of an upscale sports bar. So you'll find big TVs above the bar, and high-top tables with metal stools, but surrounding the bar are racks of wine bottles, gilt-framed mirrors and plush captain's chairs upholstered in royal blue.

Pistol Whip takes over a former tire shop on the corner of West Seventh Avenue and Santa Fe Drive.
Mark Antonation
Other touches — including tan leather banquettes, custom light fixtures hanging from the vaulted ceiling, an antique Indian window frame separating the dining room from the kitchen, and a host station built from a sturdy French drafting table — add visual interest to the space, but there's very little in the way of actual art. "The restaurant and the food are our art," Slaughter explains.

Built on the frame of a squat, dilapidated tire shop that was one of the street's last remaining eyesores, Pistol Whip now presents a two-story facade at the corner of Seventh and Santa Fe, with big garage windows that open onto a patio perfect for a stop in the middle of gallery hopping. The build-out was designed by architect Michael Wenham, but the majority of the interior design was envisioned by Slaughter. "It was an ugly worm that went into a cocoon and came out a beautiful butterfly," the owner notes. 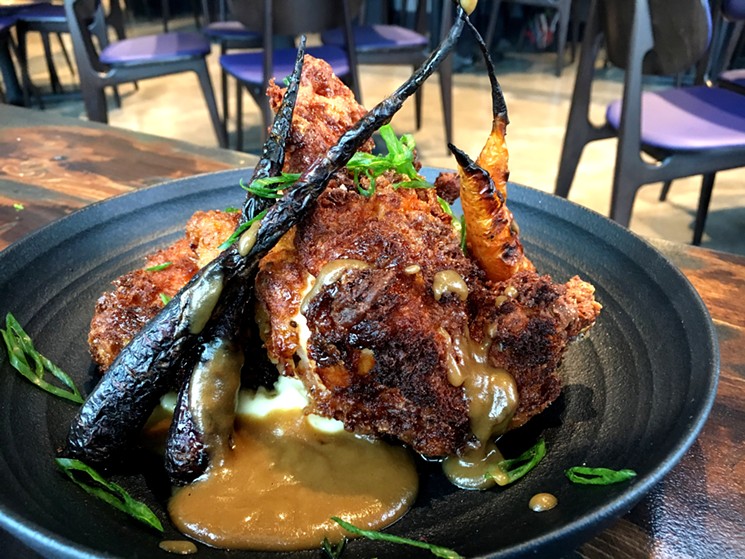 The house burger comes with multi-cheese pimiento spread.
Mark Antonation
Executive chef Nicolas Lebas also uses the word "approachable" to describe his menu. Lebas and Slaughter want guests to be equally comfortable enjoying bar bites during televised sporting events or celebrating a big night out. So you'll find oven-roasted meatballs (Lebas's grandmother's recipe) on the appetizer menu, but standard items like a Caesar salad and wings have been given new life — as Caesar croquettes and duck confit sticky wings. Pasta dishes (lasagna, papardelle, agnolotti) ring up in the low $20s, while entrees range from a $16 burger to a $30 duck breast with risotto.

Pistol Whip's bar and community seating.
Mark Antonation
For high-rollers (or steak lovers), there's a grill menu with steakhouse cuts, complete with à la carte sauces and sides. An eight-ounce beef filet with bone-marrow butter starts at $36, but you can top out at a 42-ounce, dry-aged tomahawk ribeye for $180. That's a pretty penny, but Lebas brings in entire beef rib primal cuts and ages them for thirty days before cutting and trimming individual chops.

The bar also caters to a wide range of tastes, with twenty beers and four organic wines on tap, plus a wide range of wines by the glass and bottle from GM/sommelier Luke Recine.

Pistol Whip will be open for lunch and dinner daily beginning May 1 and will eventually add brunch on Saturdays and Sundays — but not during the first weekend of May, since Santa Fe's First Friday Art Walk will be a big enough challenge for the new eatery. Call 303-963-5346 or visit the Pistol Whip website for more details.
KEEP WESTWORD FREE... Since we started Westword, it has been defined as the free, independent voice of Denver, and we'd like to keep it that way. With local media under siege, it's more important than ever for us to rally support behind funding our local journalism. You can help by participating in our "I Support" program, allowing us to keep offering readers access to our incisive coverage of local news, food and culture with no paywalls.
Make a one-time donation today for as little as $1.