Potager opened in 1997. Molly Martin
If you've visited Potager recently, you may have noticed a new staff member doing everything from hosting and busing to prepping in the kitchen — all at just two and a half. "It's really something to behold," says chef Paul Warthen of his son, William Gardner Warthen, affectionately called Gardy — or "the Potager baby."

Taking over an iconic culinary institution is no small task, but Gardy and his parents are fully on board. "It was a lot of pressure," admits Paul's wife, Eileen. Two months after they found out they were expecting Gardy, the couple and business partner Nik Brand purchased Potager from founder Teri Rippeto.

In the late ’90s, Rippeto had opened her kitchen-garden restaurant at 1109 Ogden Street, ushering in the farm-to-table movement that has since become a staple of the Denver dining scene. "Teri wanted to make a restaurant that focused on knowing where your food came from, and doing it really simply and beautifully and seasonally," explains Eileen. "And that's something we really valued when we came out here." 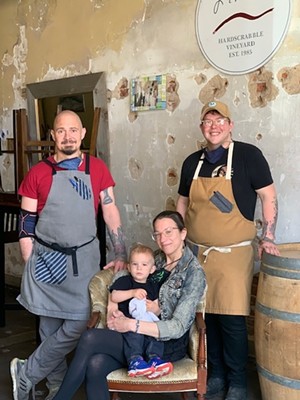 Paul (left) and Eileen Warthen purchased Potager with business partner Nik Brand in 2019.
Potager
Now the Warthens are honoring Potager's past and looking toward the future as the restaurant celebrates its 25th anniversary at the end of May.

When the couple moved to Denver in 2017, they didn't know that restaurant ownership was on the horizon. But as she researched places she might work, Eileen, a native New Yorker and certified sommelier, kept seeing the name Potager. "It was my first serving job when I moved to Denver, and I felt really grateful to be a part of it," she recalls. That year, Potager marked its twentieth anniversary; as longtime regulars and staffers came out to celebrate, it became clear to Eileen and Paul that this was a special place.

Six months later, Eileen became the restaurant's beverage director, and Rippeto asked Paul to be the chef de cuisine, telling him in the interview that she was looking for someone to take over "someday," Eileen remembers. "We thought that meant, like, five years down the line, and then pretty much a year later she said, 'Okay, I'm ready to go.' It was just an amazing opportunity for us."

After getting married on December 31, 2018, then finding out they were expecting over Valentine's weekend 2019 ("Our busiest weekend since starting at the restaurant," Eileen notes), the couple officially purchased Potager that April and quietly took over as Rippeto moved out of Denver. "She fell in love with a man she met in 2017 at the Boulder Farmers Market, actually," Eileen says. They got married and relocated to Maine, where Rippeto now runs a flower shop — though her original mission is never far from the Warthens' minds.

"We all share the same values. The connection to the farmers and the community that Teri had was the foundation of the restaurant, and we wanted to maintain that," says Paul, who grew up on a farm in Maryland.

"By keeping the relationships with the farms and all the people we buy our fish and meat and produce from, we were also honoring the twenty years of regular guests who had been coming through the doors," Eileen adds. "We wanted to kind of breathe a little bit of new life, but not change what Potager was, by any means."

Less than a year after becoming Potager's owners and a few months into becoming new parents, the Warthens faced a challenge no one saw coming: the pandemic. When it was announced that all restaurants were required to shut down indoor dining beginning on March 17, 2020, "we decided that we didn't want anyone to lose their jobs," Eileen says. While mass layoffs took place at eateries nationwide, Potager kept its staff, raising everyone's hourly wage to supplement the loss of tips and reinventing the eatery as a takeout-and-delivery concept. It was all hands on deck; Eileen and Nik delivered food to guests while Paul drove out to farms to pick up orders. Scallops with bone marrow from a recent spring menu at Potager.
Molly Martin
But they didn't go down after all. By summer, dining rooms had reopened and the restaurant saw a flood of new faces: people who had become fans of the food through that takeout-and-delivery effort. "The summer of 2020 was a really intense but special time for Potager," Eileen says. "We hadn't really changed anything we were doing during the pandemic, so we had a leg up on places that were having to reopen and rehire."

The restaurant also avoided a lot of the supply-chain issues that so many other eateries have faced by keeping its relationships with local producers intact, which also allowed Potager to keep menu prices affordable. "You become friends with these people, but you also almost become business partners in a way. We have a symbiotic relationship," Paul says. "Each of our success depends on the other."

While there have been a few more hiccups, including another indoor-dining shutdown in late 2020 and slow months early this year when the Omicron variant spiked, Potager has weathered the challenges and done so at its own pace, not rushing to go back to full capacity, and focusing on its goal of being a true farm-to-table neighborhood staple.

"Yes, we're in the restaurant business because we want this to be successful, but we don't really do this just to make money," Eileen notes, adding that the business definitely took financial hits over the past two-plus years.

"Really, it's to serve people," Paul continues. "You want to create an experience. It starts with the connection to the farmers and the regulars, so when people come in, there's already that foundation, and then they become part of it and build something even bigger."

That sentiment is shared throughout the restaurant. "The bottom line isn't as important," Eileen notes. "The people's faces are more important. We have an open kitchen, so all the guys in the kitchen can see everyone dining, and there's just a much bigger sense of community because of that."

Over the years, countless people have become a part of that Potager community. From first dates to engagements, many diners have marked life milestones over meals here — including master sommelier Bobby Stuckey, partner at Frasca in Boulder and Tavernetta in Denver. "In April 1999, I drove from Aspen to Denver to have dinner with an amazing woman for a first blind date," he remembers. "That woman was Danette, who has been my wife and partner for 22 years."

Potager's garden is the perfect place to escape for a meal.
Molly Martin
A lot has changed in Denver since that fateful dinner. "When Teri opened in 1997, the food scene itself was incredibly different, in that all of the celebrity chefs and award-winning chefs who are here now — none of them had opened, and all of them were influenced by Teri, from Alex Seidel to Jennifer Jasinski to Caroline Glover and Paul Reilly," Paul points out.

Many of Potager's former staffers have gone on to open their own notable restaurants, including chef Chris Bell, who opened Port Side in 2016; Luke Hendricks and Anthony Lygizos, the duo behind Leven Deli; and onetime manager Karin Lawler, who founded the Truffle Cheese Shop and Truffle Table with her husband, Rob, before selling the businesses in 2019.

And so, as the restaurant's 25th anniversary approached, the Warthens thought it was definitely time to celebrate both the past and the future. "Potager is such an important part of the Denver dining scene, so for us, marking 25 years is a way to look back, but also to be like, 'Hey, Potager is still here. If you haven't heard of it, you've got plenty of time, because we've been here 25 years, and we only plan on doing better food and more beautiful food, offering a great dining experience and growing in the community,'" Eileen explains.

A big part of that growth is based on education, "from how we manage our own garden to going on farm tours and introducing the staff to what they're doing so that everybody respects that," Paul says. That farm-to-table ethos is more than a fad, he notes: "Potager's never been a trendy restaurant. It's just the real thing, and I think people can still find comfort in that."

But while it's not trendy, Potager is ever-evolving, with a menu that changes monthly. "There's nothing old or outdated, because everything we do, we change all the time," Eileen says. "Which is hard and exhausting, but we love it, and we're never bored. We don't have enough time in the day to do all the things we really want to do, but we're really excited about our jobs every single day.'

In recent weeks, Eileen's been posting throwback photos and stories — many of them shared by Rippeto — on the restaurant's Instagram feed.  And while Potager's founder won't be in Denver when the actual employee anniversary party happens the last weekend of the month, her influence is felt every day at the restaurant, where the Warthens continue to build on her legacy, with Gardy in tow.

"We just want to be a solid thing you can count on. Which isn't brave — we're not going out trying to open seven more places," Eileen says. "We just want ours to be really great."

Potager is located at 1109 Ogden Street and is open from 5 to 9 p.m. Tuesday through Saturday. For more information, visit potagerrestaurant.com.
KEEP WESTWORD FREE... Since we started Westword, it has been defined as the free, independent voice of Denver, and we'd like to keep it that way. With local media under siege, it's more important than ever for us to rally support behind funding our local journalism. You can help by participating in our "I Support" program, allowing us to keep offering readers access to our incisive coverage of local news, food and culture with no paywalls.
Make a one-time donation today for as little as $1.