Racines Will Return...for a Long Goodbye Racines at 650 Sherman Street. Larry Laszlo
Racines will be back once the coronavirus pandemic is under control...for a long goodbye.

Owners Lee Goodfriend and David Racine had been thinking about closing their last restaurant for some time. After all, they'd founded their first, Goodfriends, more than four decades ago, then went on to open Racines at 850 Bannock Street and the downtown Dixons (named after late partner Dixon Staples), before finally building a replacement for the original Racines at 650 Sherman Street over fifteen years ago.

That was the property they were going to retire on, and a year or so ago, Goodfriend was ready. "I'm seventy, and David's close," says Goodfriend. "I strongly wanted to retire, but it took me a while to convince David."

Helping to persuade him were some of the new challenges of running a restaurant. Their property taxes had just gone up almost $20,000, to over $73,000; Denver's increased minimum wage, which didn't take into account the restaurant tip credit, was causing even more headaches in a business that already had razor-thin margins. "It was one thing after another," Racine says.

Last year, they began talking to real estate agents and developers they'd worked with before, and they had a deal in place and a target end date of January 2021. But for all of their tough conversations and careful planning, they couldn't have envisioned a restaurant shutdown because of the spread of COVID-19. 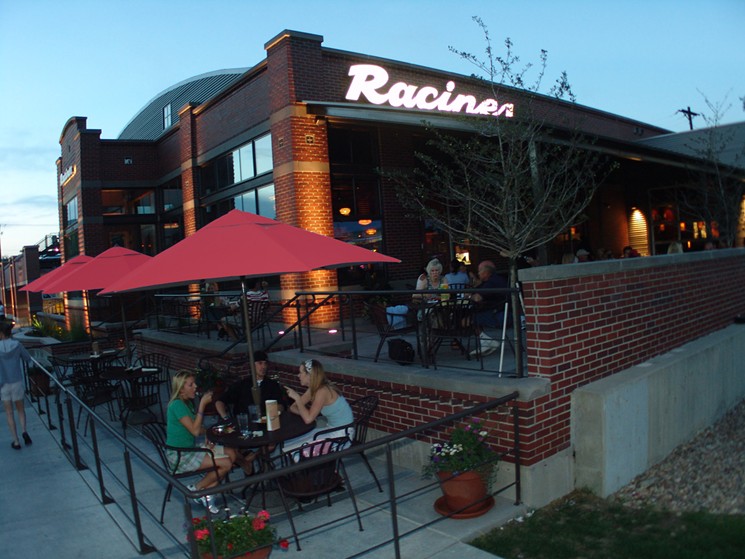 The Racines patio became a popular gathering spot.
Larry Laszlo
When Mayor Michael Hancock announced on March 16 that all Denver restaurants must close the next day, they decided to forgo the to-go option and shutter for the duration of the order, an estimated eight weeks, then bring back Racines for a many-month farewell.

The unanticipated temporary closure has given Goodfriend a taste of what life will be like without the restaurant where she's spent so much of her time. "The thought of not having Racines there, not seeing my customers..." she pauses. "I guess this is the test, but it's not great. Still, going through this, I don't think I can handle stress the way I used to."

"Part of our life has been being with our staff, which keeps us young and happy, and the customers that we develop strong, strong relationships with," says Racine, who's been known to help direct traffic and pick up trash outside Racines. "There's the good and the bad that goes with the business, but you leave work feeling pretty much energized. There are great days and days that carry burdens, but you figure out the best ways to deal with things."

And ultimately, they decided that the best way to end their run at Racines was to close it altogether, selling the site they'd bought and built on. "We're hoping that maybe someone would want to buy the concept and keep Racines Racines, but we were focused on the property, to make enough money to retire," Goodfriend says.

The land and building are now under contract, and the developer plans to submit plans to the city soon. 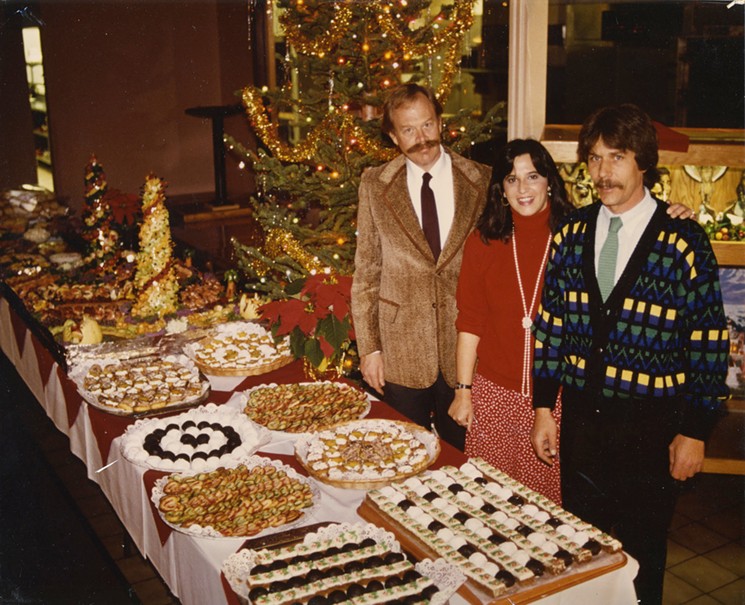 Dixon Staples, Lee Goodfriend and David Racine at a holiday party at the first Racines.
Racines
This long-planned end is a stark contrast to how this restaurant group began. Goodfriend was working at Zach's, Denver's first fern bar, when she and friend David McCormick cooked up the idea of starting a restaurant. Racine was working as a bartender at Zach's, and he wanted in; so did Dixon Staples, a chef at Apple Tree Shanty who had a friend who ultimately became the contractor on their project at 3100 East Colfax Avenue.

That was Goodfriends. "The perfect name, kind of like Cheers," says Racine, who got his own namesake spot not long after.

"We mortgaged our cars for the music system and paid 18 percent interest on Goodfriends and thought it was a good deal," recalls Goodfriend. "We worked our butts off, even me, doing a tiny bit of manual labor."

It was a groundbreaking restaurant for Denver. "They laughed at us because we wanted to serve vegetarian food and make food from scratch," she remembers, noting that both would be a given at a restaurant today.

Goodfriends soon became a neighborhood gathering place for the entire city, and Staples, Goodfriend and Racine followed it with another neighborhood spot, Racines, that opened in 1983, and then Dixons, at 1610 16th Street, in 1997.

They kept both Goodfriends and Dixons going when they lost their lease at the original Racines and decided to risk building its replacement, which opened in April 2004. It was a massive project that involved a 9,600-square-foot restaurant with 260 seats in the dining room and bar, as well as a 90-seat covered patio; there was also an 80-space parking garage. Eighty percent of the kitchen staff, half the bar staff and 30 percent of the servers who'd worked at the original Racines returned to work at the new one.

"My favorite memory was when we reopened the restaurant," Racine says. "We had two entrances, and there were people lined up at both to come in. To see the old, familiar faces."

Partners Dixon Staples, Lee Goodfriend and David Racine at the groundbreaking of the new Racines.
Racines
And Staples, who'd been fighting cancer, lived to see it, Goodfriend recalls.

But then in 2008, they sold Goodfriends to the folks who ran Annie's, and they decided not to renew the lease at Dixons three years later. "After being kicked out of Racines with six months' notice, we didn't want to have a landlord again," Goodfriend recalls.

And now, a decade later, Racines is nearing the end of the line.

While the restaurant is closed and most of the 100-plus-member staff laid off until Racines can reopen, they have time to reminisce. One of Goodfriend's favorite moments was during the Democratic National Convention, when Dixons was flooded with people, full of energy.

But serving celebrities and politicians was nothing new to this crew. Dixons and both Racines locations have been favorite meeting spots for the city's movers and shakers. "Every governor, every mayor, every senator has come in," says Goodfriend.

At Dixons one day, Racine was at the host stand when he got a call for Wellington Webb, right as the then-mayor walked by.

Still, for all the famous faces, it's the people they've worked with that they talk about the most.

Staples, of course. "I miss him every day," says Goodfriend. "The three of us were very bonded. He was a one-of-a-kind guy."

Not for employees, and not for their regulars. 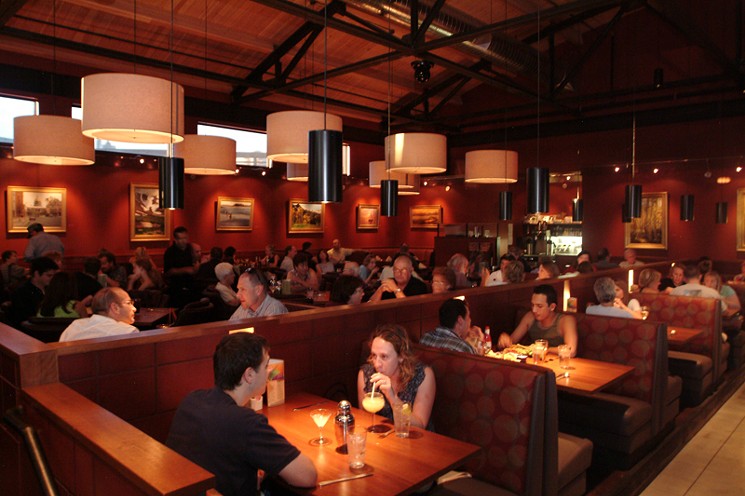 The dining room at the new Racines kept some flavor of the original.
Larry Laszlo
"I'm most proud of our commitment to equality in everything we've done," Goodfriend adds. "Everyone could come into Racines and Goodfriends and Dixons and feel comfortable, whether they were gay or straight, rich or poor, black or white."

Racines has used the slogan "Nearby and on the way," but it's been much more of a destination in this city, a go-to place for people from around town who want to get together for business or simply to enjoy each others' company. "It's just been a real community place where people could be themselves and not worry," says Goodfriend.

And Racines will be again, from the day it reopens until it finally closes on January 15, 2021. Racine and Goodfriend have a special menu planned with a lot of old favorites, as well as a full plate of activities commemorating 36 years.

"We want to have a celebration of our longevity," Racine concludes.

And in this city, at this time, that's definitely something to celebrate.
KEEP WESTWORD FREE... Since we started Westword, it has been defined as the free, independent voice of Denver, and we'd like to keep it that way. With local media under siege, it's more important than ever for us to rally support behind funding our local journalism. You can help by participating in our "I Support" program, allowing us to keep offering readers access to our incisive coverage of local news, food and culture with no paywalls.
Make a one-time donation today for as little as $1.