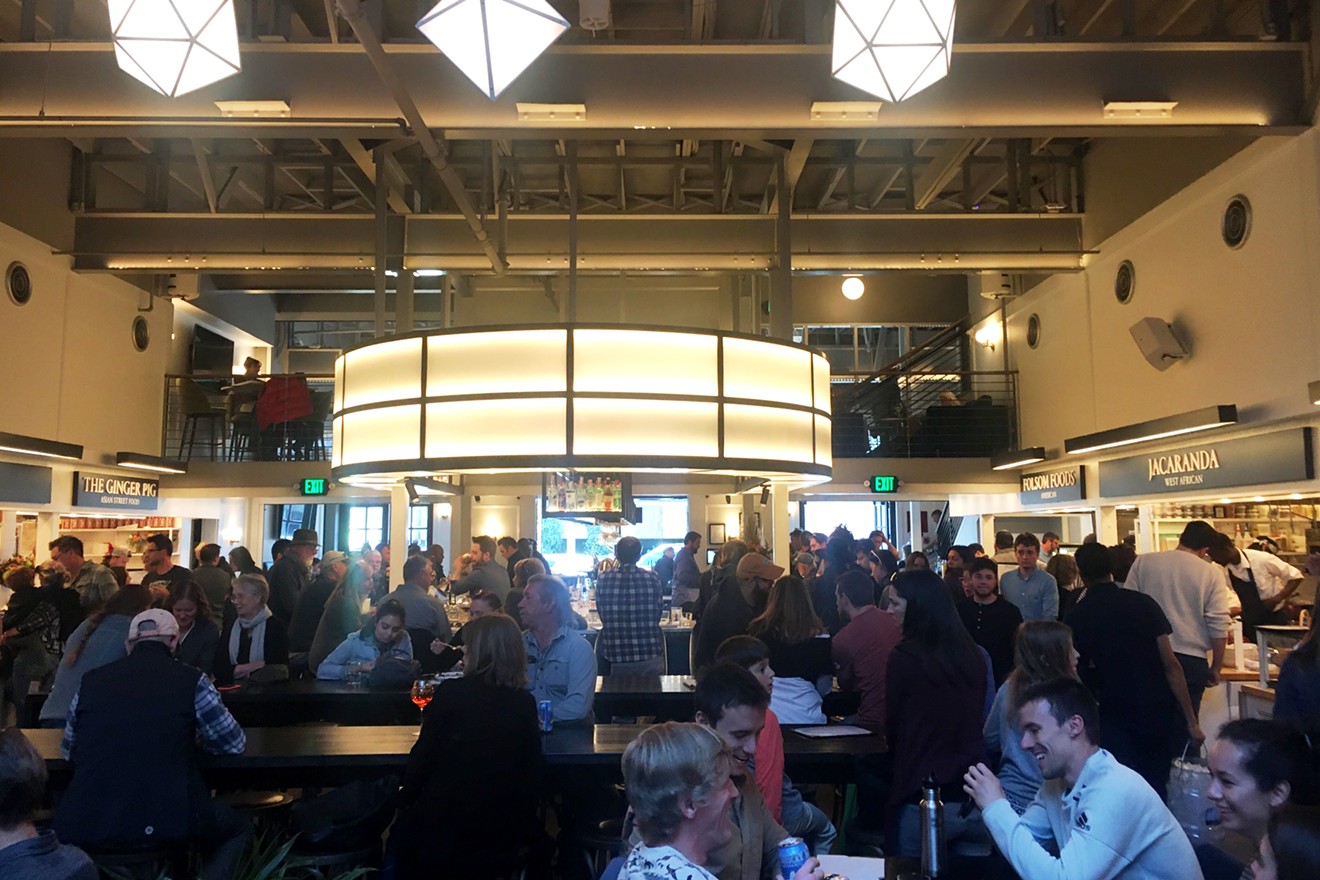 On opening Saturday at Rosetta Hall, Boulder residents showed up to eat and check the place out. Mark Antonation
At the beginning of 2019, Avanti Food & Beverage announced it would be taking over the former Cheesecake Factory location on Boulder's Pearl Street Mall to create a second location of its popular LoHi original. Current estimates have Avanti Boulder opening in spring 2020, but in the meantime, another operator is slipping in under the wire as Boulder's first food hall.

Rosetta Hall will open at 11 a.m. this Friday, October 11, at 1109 Walnut Street (right next door to the Rio Grande), with ten food vendors offering something a little beyond standard food-court fare. Donovan Greene, whose father, Doug Greene, also owns the Boulder Theater and built the Rembrant Yard events center, is one of the masterminds and CEO behind Rosetta Hall, which will also have a 48-seat oval bar and a rooftop patio with a second bar. Much of the decor borrows materials from Boulder and Denver historical sites, as well as from Spain and Portugal, so there's a stylistic mingling of Colorado and Mediterranean, with a little clubland mixed in, since the space will become a dance hall and nightclub after dark.

Here's a look at the lineup, which promises a combination of well-known Boulder chefs as well as some interesting newcomers. 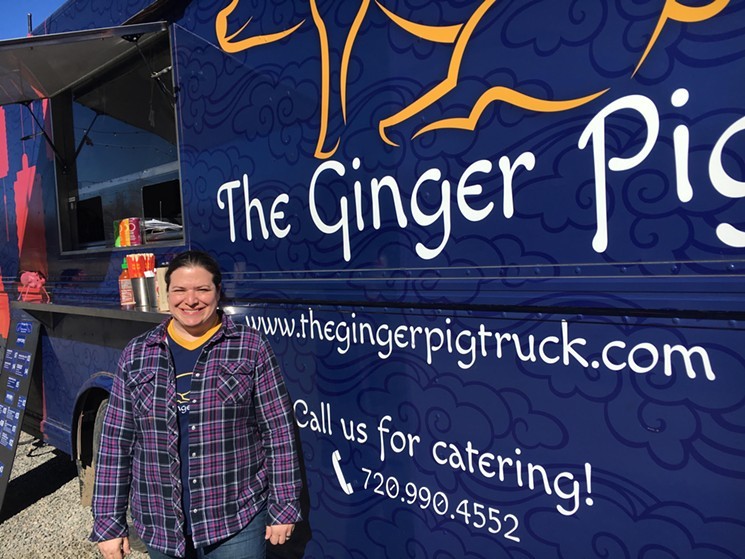 Natascha Hess is taking the Ginger Pig indoors.
Mark Antonation
The Ginger Pig
Natascha Hess built the menu for her Ginger Pig food truck based on recipes gleaned from her time spent living in China, translated to modern street-food style without losing authenticity. For the past two years, Hess and her husband, Steve, have been serving tasty takes on traditional Thai, Vietnamese and Chinese dishes, from red curry Bangkok rice balls to Sichuan-style fried chicken to tofu banh mi rice bowls. This is the Ginger Pig's first permanent location after selling from the truck, which won our Best Food Truck award last year, first at the Rayback Collective and then for the past summer at Isabelle Farm in Lafayette.

Folsom Foods
Chef/restaurateur Justin Brunson leaps into Boulder with an all-American menu that reads as a best-of from his Denver projects Old Major, Royal Rooster, Culture Meat & Cheese and Masterpiece Deli, with cured meats provided by his own company, River Bear. Breakfast sandwiches will kick things off before phasing into pastrami and grilled cheese sandwiches, meat and cheese boards and even an award-winning hamburger or two. Jacaranda is one of eight restaurants inside Rosetta Hall.
Mark Antonation
Jacaranda
Gambian chef Modou Jaiteh has worked in New Orleans and North Carolina in addition to Boulder. He'll present West African cuisine (rice stews, peanut-based dishes and lots of veggies) along with foods that exemplify West Africa's influence on the food of the American South. Chef Alberto Sabbadini is an advocate of Boulder County farms and produce.
Mark Antonation
La Tigella
Bologna, Italy, is home to a sandwich called a tigella, built on a kind of flatbread that looks like a cross between an English muffin and a pancake. The yeast-risen bread is baked to order and stuffed with cured meats, cheese and veggies. Chef Alberto Sabbadini, of Meadow Lark Farm Dinners, brings this regional rarity to Rosetta Hall, along with Roman-style pizza, handmade ravioli and slow-roasted porchetta.

Tierra
Handmade tortillas will form the base of chef Joe Lee's tacos, made in traditional Mexican styles as well as modern interpretations, including some with a hint of Korean influence.

Eridu
Chef Aaron Lande is building a menu based on ancient grains and legumes, many grown in Boulder County and other parts of Colorado. Private "cabanas" on the rooftop patio can be reserved if you want personalized service from each vendor inside the hall.
Mark Antonation
Barceloneta Oyster Company and Rosetta Bar
The main bar inside the food hall and a separate bar on the rooftop patio will be overseen by beverage director Curtis Worthley. There will also be a raw bar with oysters on the half-shell.

After Friday, Rosetta Hall will be open beginning at 8 a.m. daily. See the food hall's website for more details.
KEEP WESTWORD FREE... Since we started Westword, it has been defined as the free, independent voice of Denver, and we'd like to keep it that way. With local media under siege, it's more important than ever for us to rally support behind funding our local journalism. You can help by participating in our "I Support" program, allowing us to keep offering readers access to our incisive coverage of local news, food and culture with no paywalls.
Make a one-time donation today for as little as $1.