Sancho's Broken Arrow, at 741 East Colfax Avenue, is a thinking place, according to the iconic sign. Sarah McGill
I found myself at Sancho's Broken Arrow (741 East Colfax Avenue) with a friend on a recent Saturday afternoon and realized that the last time I had been in was quite a while ago — too long ago, really. The bar was comfortingly familiar and seemed somehow untouched by the hands of time. Coming in from the afternoon sun on Colfax Avenue, I found that the joint was, as always, dark, and full of random hippie art (and random hippies), plastic-covered seating and jam band music. It was also probably the first time I had ever ventured into Sancho's during daylight; most of my previous excursions had involved pre- and post-concert hangouts associated with shows at the Fillmore Auditorium next door.

But I discovered things during this particular trip to Sancho's that I hadn't known before. First off, the happy hour is pretty sweet. Two-for-one deals on already-cheap beers are the norm from 4 to 6 p.m. every day. My friend and I were pleasantly surprised when our two beers apiece cost a total of $8. That's not what I remembered Sancho's for, but I will now.

Sancho's Broken Arrow.
Brandon Marshall
The place was pleasantly busy on that Saturday afternoon, but the bartender told us it was actually kind of slow for happy hour. We sat at the bar among a cast of characters including a couple of tie-dye-wearing dudes with beards and sweat-stained baseball hats, a group of tourists having a "girls' weekend," and some gray-haired guys decked out in full ensembles of college sports gear from different teams, despite the fact that the bar only contains one rather inconspicuous TV and they were not watching the game. The rest of the large, open area on the other side of the bar also had a healthy crowd of people playing pool and foosball, and a guy silently eating a bag of Church's chicken on one of the plastic-covered couches. For some reason, no one was playing the air hockey game that somehow magically fits in the space as part of a jigsaw puzzle that also contains three pool tables and two foosball tables. Everyone looked like they had just come directly from backcountry skiing, which is probably how the clientele at Sancho's could be described most days.

We chatted with the bartender, whose name is Phil, just like the late co-founder of the bar, Phil Bianchi. He says that people call him "Re-Phil," get it? Re-Phil was wearing a "Taylor Swift or Die" shirt and told us his goal is "just trying to uphold the bar's reputation for shitty service." But really, he claimed he is "here for the girls," as he gestured to an attractive woman wearing a Phish sweatshirt seated on the other side of the bar.

But back to the original Phil: Phil Bianchi, and his brothers Jay and Aric. The three brothers, bonded together by their love of all things Grateful Dead, decided to open the bar in 2000 to make their own "Cheers for Deadheads." The brothers had actually started out with the first version of the now-nonexistent Quixote's True Blue in 1996. Sancho's was added to the roster when the space on Colfax, which previously housed an establishment called the Gold Nugget Country Disco (which sounds impressively terrible), became available.

They named the bar after the song "Broken Arrow," recorded by Phil Lesh of none other than the Grateful Dead, among others. Nowadays, the last version of Quixote's True Blue has been replaced by Be on Key Psychedelic Ripple (a play on the name "Bianchi"), which opened in 2016 in the old Denver Wrangler Space at 1700 Logan Street. The Bianchi brothers also own Owsley's Golden Road in Boulder, another concert venue and jam-band mecca. Sadly, Phil Bianchi passed away last July, but he's honored in mural form on an exterior door of the bar. In July, a celebration of his life included a procession from the Psychedelic Ripple to Sancho's. Most recently, a two-day concert to benefit the Parkinson's Alliance continued the remembrance of a man his brothers described as the "cheerleader" of Sancho's and the other family businesses. 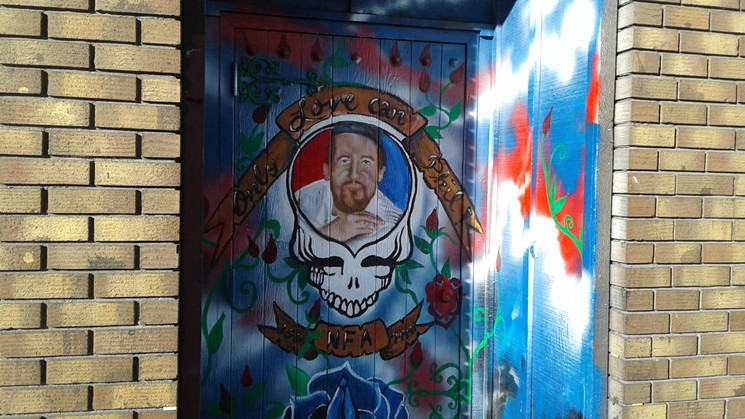 "Only Love Can Phil" is a fitting sentiment to honor the memory of the late co-founder of Sancho's Broken Arrow, Phil Bianchi.
Sarah McGill
Phil was an artist, and all of the Bianchi family businesses are about creating a place for art and music, above all. Sancho's Broken Arrow is visually overwhelming and beautiful in a very specific, hodgepodge way, both inside and outside. Murals cover the walls, the door frames, the bar, the ceiling tiles and the tables. There's an abundance of framed band posters including, of course, rare ones of the Grateful Dead. And everything else, like the old-school cash registers, the doors and every other surface, is choked with stickers for bands and marijuana dispensaries.

My friend and I enjoyed ourselves while taking in all the different visual elements, chatting about our latest dating trials and tribulations and listening to the strains of classic rock and jam bands from the jukebox. It's an actual jukebox that hasn't been replaced by a TouchTunes electronic model and probably never will be, because this is not a TouchTunes sort of place. Despite "Re-Phil's" shirt, I don't think the crowd in here actually wants to listen to any Taylor Swift hits. The machine in question won Westword's readers' choice for Best Jukebox in 2015, as commemorated by a framed certificate only partially obscured by stickers on one wall of the bar.

Tabletop art is just one of the many varieties of art on display at Sancho's Broken Arrow.
Sarah McGill
I reflected back on the many times I went to Sancho's during my early days in Denver, dominating games of foosball against guys with dreadlocks who were probably too high to compete, grabbing drinks before whatever show I was attending, and being a part of other debaucherous exploits that probably are best left out of this story (you know, to protect the innocent). Some of the people involved in those stories are probably still regulars at Sancho's, but we wouldn't recognize each other these days. The crowd in here is a specific slice of the neighborhood, and one that hasn't changed a bit as development in Denver has laid waste to much of what was once familiar. Re-Phil confirms this; aside from the random concert-goers and tourists who wander in, he really does know everyone's names. The place gets busy for happy hour, whenever there's a show at the Fillmore and when Sancho's features its own live bands on Monday nights. The Bianchi brothers are known for booking bands they enjoy, even if they know they aren't really going to make money, because it's always been about the music.

Sancho's Broken Arrow is definitely about providing a home for a particular community of people united by their love of music. It often seems like the rest of us are just visitors to the place, but no one really minds, because all are welcome. My friend said it reminds him of a "remote mountain town in the middle of Denver" — and that sounds pretty appropriate. We tourists enjoyed our little mini-vacation in the middle of the day. As we stepped back out into the sunlight on Colfax, cars rushed by, and the transition back to the city of Denver seemed jarring. But I guess that's always how you feel after returning from a long, strange trip to Sancho's Broken Arrow.