Palisade peaches in season. Linnea Covington
During the summer months, chef John Broening of Three Saints Revival, at 1801 Wewatta Street, creates a special tapas menu each Saturday night inspired by what he can find at the Union Station Farmers Market — even when his initial ideas are waylaid by missing vendors and ingredients that are no longer available.

Such was the case on August 13, when two of the chef's favorite farmers, Furst Class Fungi and Near & Dear farm, weren't there. At first, Broening wasn't sure what direction he wanted to go in, but after a quick look around, he created a plan. He is a pro, after all, with years of experience at restaurants like Avelina, Duo and Spuntino.

First up, Lazy J, a ranch outside of Longmont that raises heritage pigs and feeds them locally grown non-GMO triticale, a wheat-rye hybrid. That diet, Broening says, gives the meat a clean finish that he prizes. At the stand, the chef bought two beautiful pork bellies for $30, which would later get sliced, crisped up and served on Little Gem lettuce and topped with pickled onion and plum mustard. 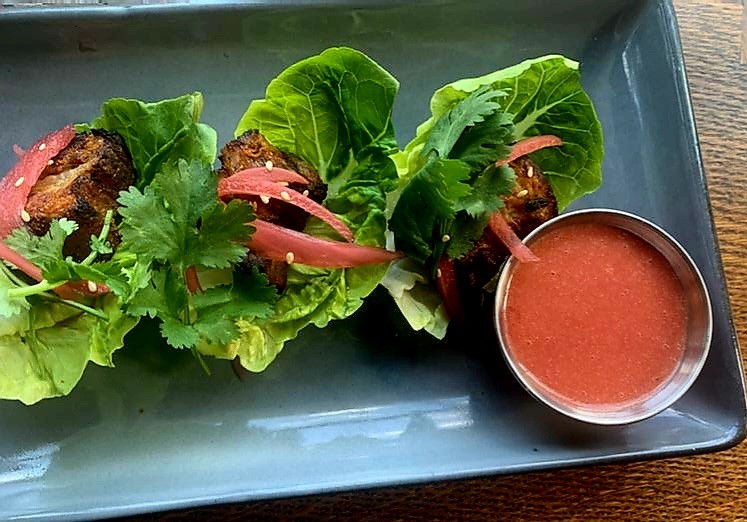 Crispy pork belly sourced from Lazy J at the Union Station Farmers Market.
John Broening
The mustard was made with plums from Forte Farms, an orchard out of Palisade, the Western Slope town known for its peaches, both of which are perfectly in season right now. Broening also bought a handful of freestone peaches, as well some of the mango doughnut variety, which are firmer and have a lighter flavor and slight mango-y essence to the flesh. Then we went back for beefsteak tomatoes. Overall, the chef visited that stand three times and spent $40-$50 on succulent Western Slope fruits.

The particular menu Broening prepares on Saturdays nights is meant not only to give guests a taste of what's growing in Colorado right now, but also to help showcase for his own team at the restaurant what can be done with seasonal specialties. Often, he brings his chefs along on these shopping trips so they can see what's fresh, taste ingredients and brainstorm ideas. However, on this particular sunny Saturday morning, Broening was solo — which didn't stop him from coming up with three plates for the specials that night. 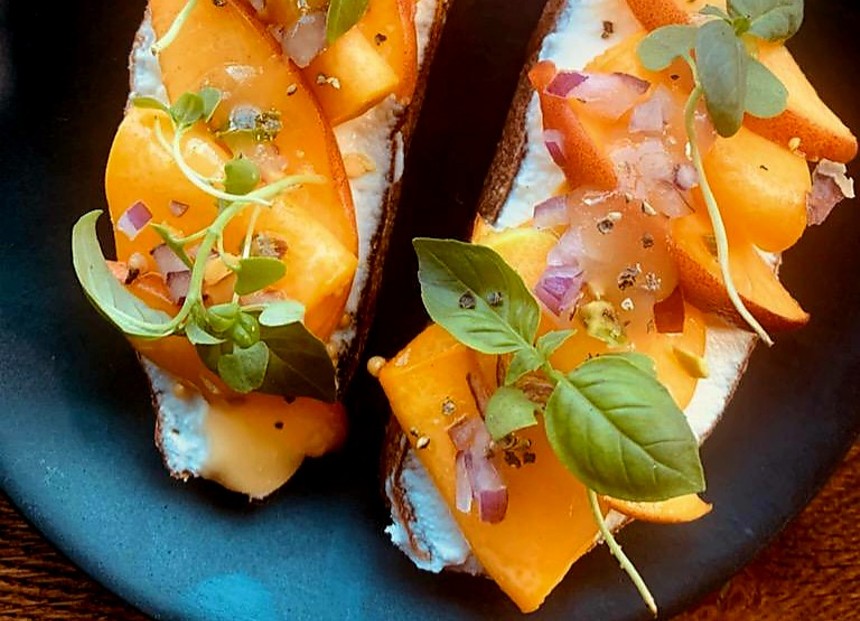 Palisade peaches on crostini.
John Broening
With the two types of peaches, Broening whipped up a crostini layered with housemade ricotta and micro basil, which he also found at the market. Tall Guy Tiny Greens is a stand that indeed is run by a very tall man, Eric Beck, who started the business during the pandemic. Microgreens, says Broening, are always found at a farmers' market thanks to lauded chef Charlie Trotter, who started the trend of using these tiny sprouts on dishes back in the 1980s.

The tomatoes from Forte Farms were prepared by chef de cuisine Camillo Aragon Hernandez, who paired the sliced beefsteaks with mozzarella that had been marinated in a citrus vinaigrette, then topped it with cantaloupe micro greens, which do indeed have a mellow melon flavor.

We also stopped by Bjorn's Colorado Honey, where we tried the lemon honey, which is just as bright and sweet as it sounds. The chef didn't use it on that day's Farmers' Market Tapas menu, but we wouldn't be surprised to see it pop up in the future.

Three Saints Revival's Farmers' Market Tapas menu is available every Saturday while the Union Station Farmers Market is running, through September 10.
KEEP WESTWORD FREE... Since we started Westword, it has been defined as the free, independent voice of Denver, and we'd like to keep it that way. With local media under siege, it's more important than ever for us to rally support behind funding our local journalism. You can help by participating in our "I Support" program, allowing us to keep offering readers access to our incisive coverage of local news, food and culture with no paywalls.
Make a one-time donation today for as little as $1.