Mountain Sun Facebook page
At least a dozen breweries closed their taprooms in Colorado in 2017. That's the bad news. But eight of the twelve were replaced by other existing breweries or breweries-in-planning, so the vacated spaces are at least being recycled, the brewing equipment reused and thirsty beer drinkers being served.

One reason for this is because existing breweries are increasingly looking to expand — especially as competition increases — and finding a space that is already set up as brewery, often referred to as a turnkey business, can make things much easier and cheaper.

Last week, Epic Brewing announced that it had purchased the eleven-year-old Telegraph Brewing in Santa Barbara, California, but Epic co-owner Dave Cole didn’t rule out future brewery purchases in either Colorado or California. And Epic isn’t the only small- to medium-sized brewery looking to grow. Both Denver Beer Co. and the Mountain Sun Pub Group are also in the market for existing breweries.

“We’re not in a rush and would rather buy a location that is already built out,” says Kevin Daly, the co-owner of Mountain Sun Group, which owns five pubs in Boulder, Denver and Longmont, three of them with breweries. “I feel like the brewpub/restaurant market is way oversaturated and that there will be some good spaces coming back on the market in the next two years.”

Although the search for a sixth spot is “casual” and the company isn’t in any rush, Daly says he’s targeting northwest Denver, where he hopes to find a “funky cool building.” 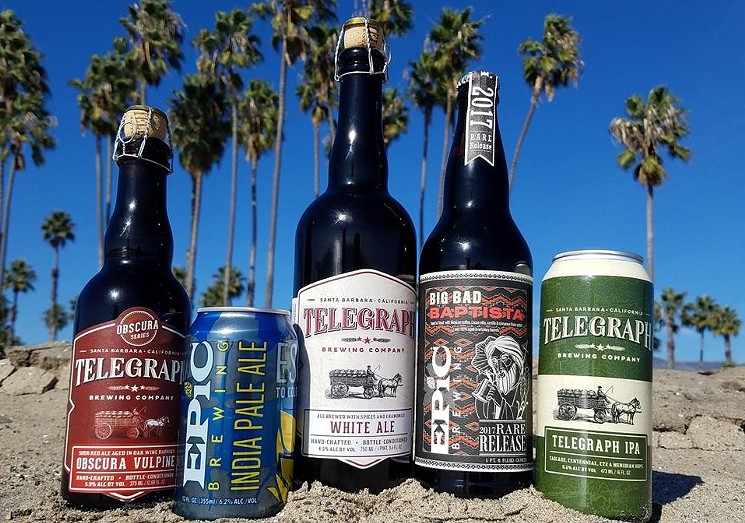 Epic Brewing bought out Telegraph Brewing last week.
Epic Brewing
Denver Beer Co. isn’t in a hurry, either; after all, the company just opened its third location, this one in Olde Town Arvada, but co-founder Patrick Crawford says he’s looking around.

“It could be fun if the right opportunity came across,” he explains. That opportunity could take many forms, though. It could be to invest in a brewery that needs help keeping the lights on, or to strike a partnership with a beer maker that wants to begin growing and packaging. “We aren’t knocking on doors.... We have a nice packaging brewery that isn’t running at capacity.”

One of the biggest reasons that this kind of expansion makes sense right now is because breweries typically make the most money by selling beers from their own taprooms. The margins are much smaller when they sell beer by the keg, the bottle or the can. And since there is so much competition for tap handles and liquor-store shelf space right now, many breweries are looking for ways to diversify and find outlets for their beer.

Earlier this year, Boulder Beer Company took over the space (and equipment) that had been used for more than two decades by Walnut Brewing. Similarly, the Big Red F Group, which owns a dozen Colorado restaurants, took over the Shine Brewing space, when that company decided to stop making beer in Boulder. Big Red F then opened an outlet of the Post Brewing Co. (a spinoff of the original in Lafayette) and began making beer there.

Here are a few other recent examples of breweries buying or taking over Colorado taprooms or brewpubs:

• Broken Compass Brewing in Breckenridge bought Backcountry Brewing, whose owners decided to close in October. Broken Compass hopes to reopen the space under its own name in the new year.

• The Thirsty Monk, a North Carolina brewery and bar company, bought Deep Draft Brewing in Denver in October and will reopen as Thirsty Monk in January or February at 1604 East 17th Avenue.

• Red Truck Brewing, out of Canada, bought Fort Collins Brewery in May. Red Truck has taken over the large restaurant and brewery, and also plans to rebrand and reopen in 2018.

• Two former employees of 1933 Brewing in Fort Collins took over the space when 1933 closed at the end of 2016 and reopened as Purpose Brewing at the end of the summer.

• Wit’s End Brewing owner Scott Witsoe closed his taproom in November and sold the equipment and the lease to Wayne Burns and Laura Worley, who will reopen as Burns Family Artisan Ales next year. Wit’s End now brews its beer at Strange Craft Beer Company under a contract deal.