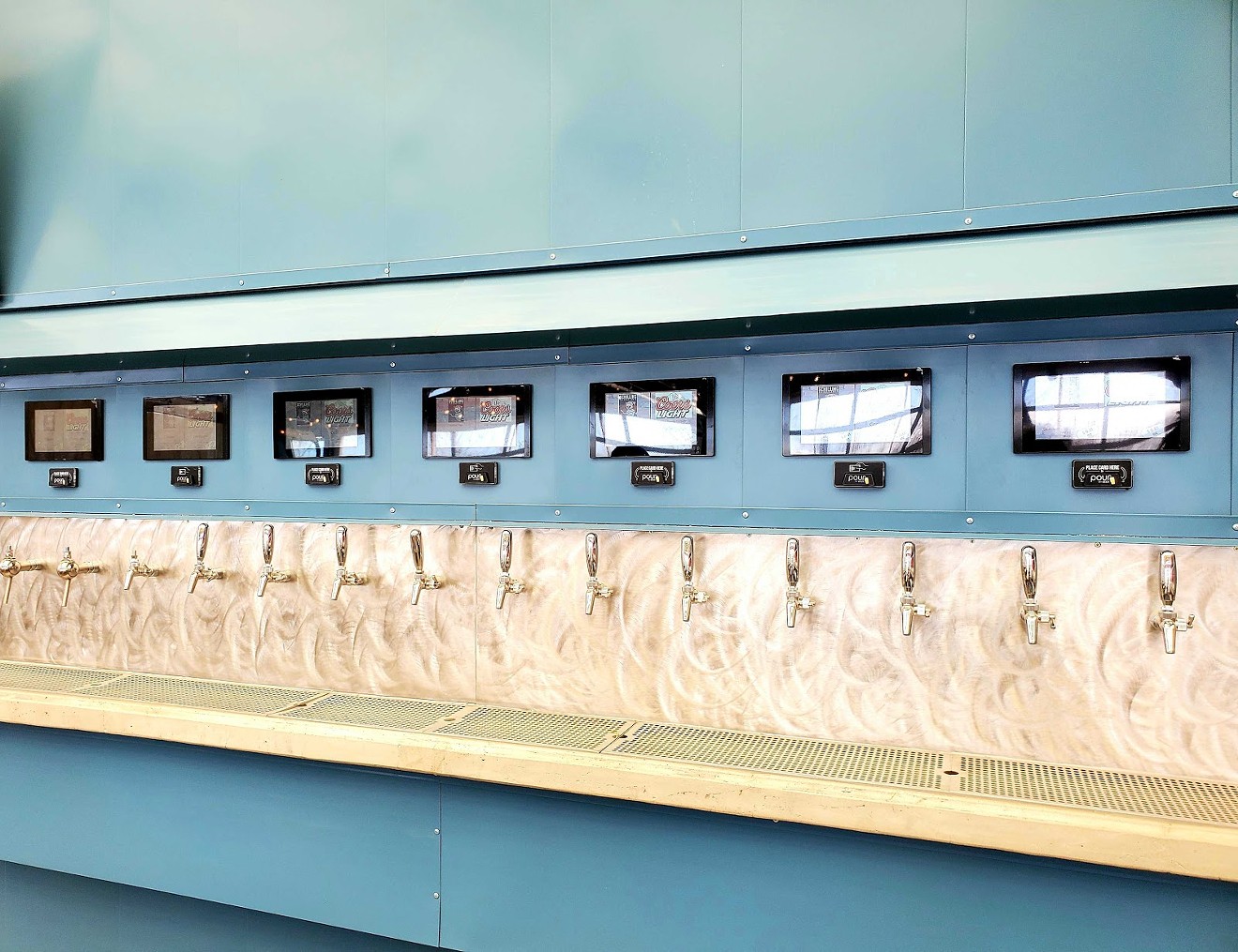 The upcoming outdoor beer wall at Stanley Beer Hall. PourMyBeer
Gone are the days of waiting patiently for your cold beer, cocktail or glass of wine; Stanley Beer Hall, at Aurora's Stanley Marketplace, just installed high-tech beer walls that let you pour at your own pace — whether you're inside the restaurant or outside on its newly expanded patio.

"We originally put self-pour technology in three years ago, but I wanted to do something outside," says Stanley Beer Hall operations manager Jim Wright, who helped design the bar and restaurant. "We have a large outdoor area that faces west, so it made sense for us to build an outside self-pour system on the patio to replicate the experience without having to come inside."

Wright teamed up with PourMyBeer, an Illinois-based company that provides software and hardware for self-serve tap lines. Wright says the system is an improvement over a previous indoor self-serve setup. In fact, the indoor PourMyBeer wall has been so effective that it inspired Wright to add the outdoor taps, as well; the heated patio and its new beverage system will fully open in early March.

Wright's explanation of the customer experience sounds safe and easy. When you arrive at the beer hall, you can stop first at a walk-up window, show your ID and get a wristband that connects with your credit card information. You won't need to step inside the dining room if you don't want to; you can head straight for the patio to pour your own drinks. The setup is perfect not just for social distancing, but for people with kids, since rambunctious youngsters can enjoy the extra outdoor space. 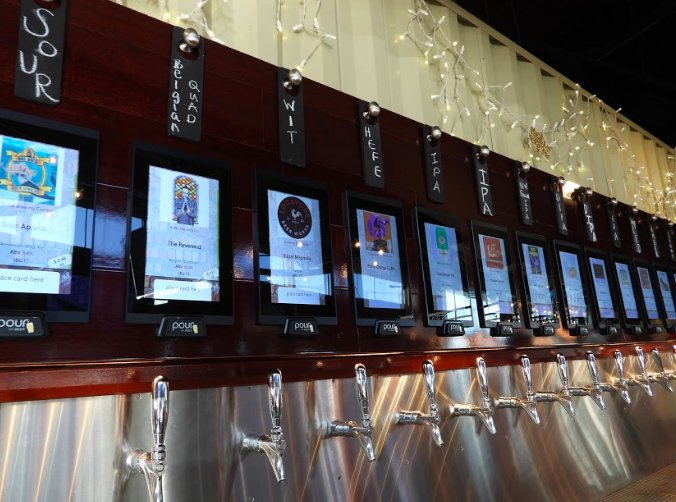 The indoor pour-your-own tap system at Stanley Beer Hall.
PourMyBeer
"The original concept didn't work," Wright points out. "The challenge was sometimes the food would hit the table before the drinks, which had to do with 100 people walking in in fifteen minutes and the bar being overrun. And for parents, we realized we had to get them enough to eat and drink before their children exploded."

The hardest part about the new system is deciding what to drink. You'll get to choose from 51 beverages to pour, covering mostly local craft beers and national brands, plus three cocktails, eight wines, kombucha and soda. Each panel displays the price per ounce and describes the beverage being poured. So you can stick with small samples or get a full pour of your favorite.

If guests need more assistance either with pouring or recommendations, there's a beer ambassador who monitors the system, talks to guests and oversees COVID-based protocols and sanitation. The Stanley Beer Hall received its 5 Star Certification from the City and County of Denver, and Wright says the staff is dedicated to keeping that rating and making sure the experience is safe and satisfying for everyone involved. Maintaining the certification includes (among many other COVID-based upgrades) offering multiple hand-sanitizing stations throughout the restaurant and keeping a supply of wipes to clean the taps and screens (which is the beer ambassador's job, not yours).

"Right now it will be a little more traffic cop-like," Wright adds. "We're being very conscious that there is no person-to-person contact. All our staff can always pour a beer for somebody if they want, and they are set to fix any issues at the pass."

A credit card is required to use the self-service taps, but you can choose to either pay with your card (you can even pre-sign and pre-tip using a percentage so that you can leave without waiting for a bill), or you can pay with cash at the counter. All food service remains traditional, with waitstaff taking orders for burgers, green chile tots, fries, wings and grilled cheese sandwiches (or whatever you decide to order) and bringing you your food.

There's more than enough room to spread out at Stanley Marketplace.
Courtesy of Stanley Marketplace
The Stanley Beer Hall has been operating with just takeout and outdoor dining available from the walk-up window, but indoor dining will resume on Wednesday, February 24. From April through mid-December, though, the eatery closed down and became a commissary kitchen. By partnering with nonprofits and donors, the beer hall was able to keep its staff employed while churning out some 162,000 meals for people in need during that time. Wright says it was great helping out during a difficult time, but he's glad to begin getting back to the normal ways of running a restaurant, step by step.

Stanley Beer Hall is located at the southwest corner of Stanley Marketplace, 2501 Dallas Street in Aurora. Call 720-749-5098 or visit the restaurant's website for upcoming hours and other details.
KEEP WESTWORD FREE... Since we started Westword, it has been defined as the free, independent voice of Denver, and we'd like to keep it that way. With local media under siege, it's more important than ever for us to rally support behind funding our local journalism. You can help by participating in our "I Support" program, allowing us to keep offering readers access to our incisive coverage of local news, food and culture with no paywalls.
Make a one-time donation today for as little as $1.