What to Order at Szechuan Tasty House, Where You Can Tour China's Imperial Cuisine 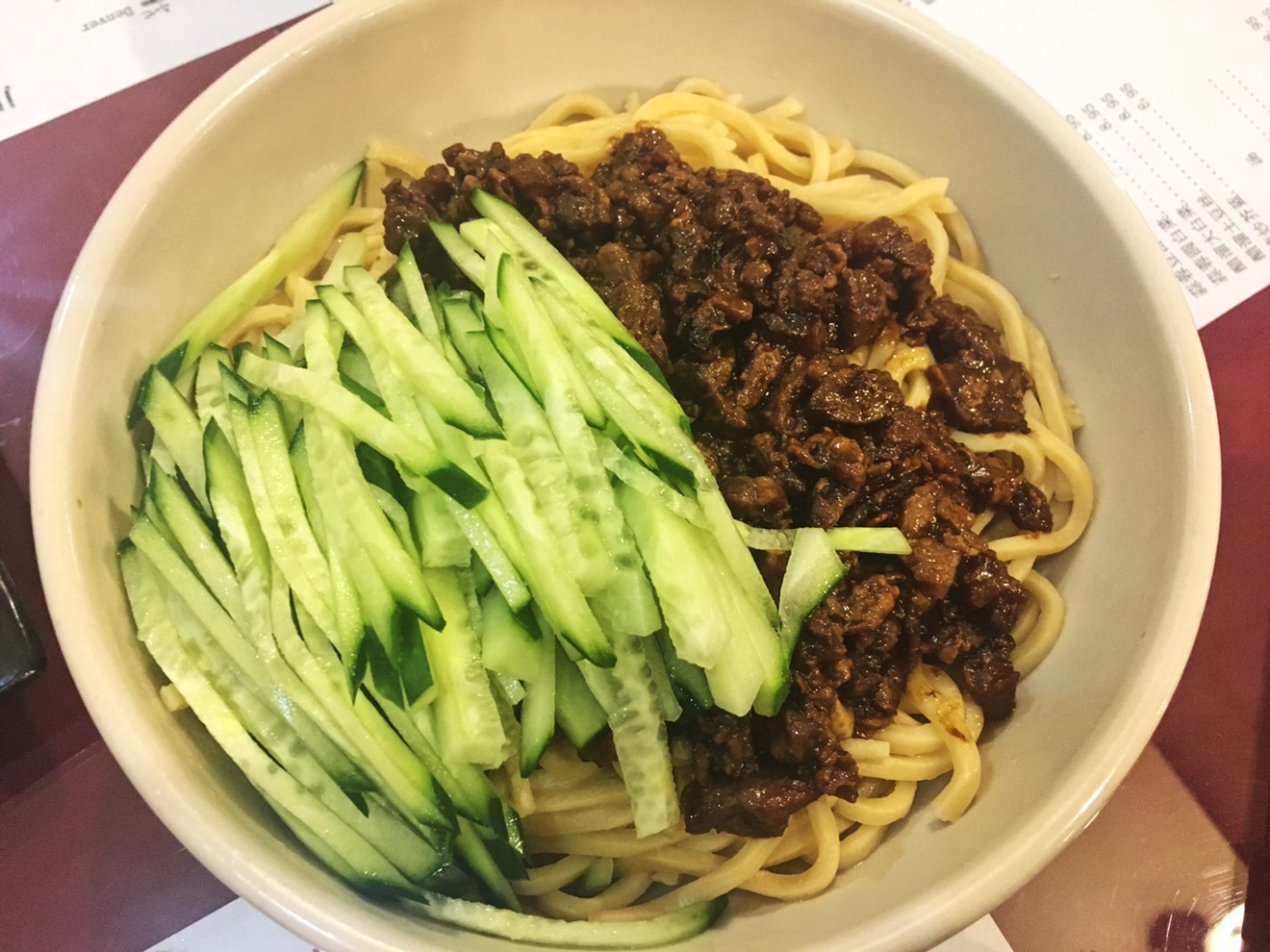 Zha jiang mian at Szechuan Tasty House. Laura Shunk
It's a testament to the magnetic pull of Sichuan food on American eaters that Szechuan Tasty House, 1000 West Evans Avenue, is yet another new Denver Chinese restaurant named for or specializing in food from a region from which the owners do not hail. The chef at this unassuming eatery is from Tianjin, a city just south of Beijing, and he joins the ranks of staff from other new places like Little Chengdu, where the owners come from northern China, and Sunflower Asian Cafe, where the chef is from Jiangsu province, another great but lesser-known (at least here in the States) food region.

Not that this should put you off: Cooking school in China covers a broad swath of the country's incredibly diverse food, and it goes deep on Imperial Cuisine, which pulls greatest hits from everywhere, including many Sichuan specialties. Moreover, Sichuan is one of the country's eight great cuisines; it is beloved and proliferates within China's borders, perhaps especially in Beijing, to which many regions send their best chefs. More to the point, the staff at Szechuan Tasty House tells us that the chef spent many years cooking Sichuan food in China. 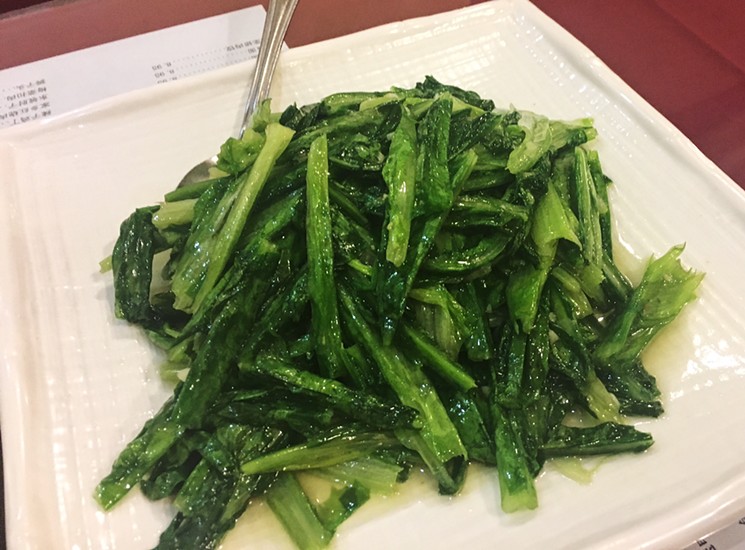 Sauteed greens are frequently underrated in Chinese restaurants, like this lettuce with smashed garlic at Szechuan Tasty House.
Laura Shunk
This regional disparity, however, does explain why Szechuan Tasty House's menu is not completely Sichuan. While the list includes several Sichuan dishes — Ma Po tofu, fish filet in chile oil, Chinese-style kung pao chicken, dumplings in spicy oil and Chongqing-style la zi ji (translated here as "Chong Qing style deep fried spicy chicken") — you'll also find a thicket of Imperial Cuisine, with items like dong po pork knuckle (a rich stewed pork dish with origins in Jiangsu and Hubei provinces), hong shao rou (here, home-style braised pork in brown sauce, a specialty of Jiangsu and Hunan that was Mao's favorite dish), tomato with egg (a home-cooking dish common across China), and zha jiang mian (noodles with soybean paste, a staple in Beijing). And while the Sichuan cuisine is solid, it's the other dishes from that Imperial canon that will get us to return.

To access any of these items, you'll need to request the Chinese menu when you sit down — it's printed in Chinese and displayed beneath glass at each table, but there's an English translation, too. Take your cues from parties around you, and you'll see that you should order a spicy chile-oil dish (fish, beef, or half fish and half beef) and one of the two noodle offerings. Our money is on that zha jiang mian — the chewy noodles come topped with sweet-savory stewed pork imbued with five-spice and topped with slivers of fresh, verdant cucumber. Unpretentious and rib-sticking, there's a reason this dish is a Beijing favorite — and you can bet you'll think about it often after you've tasted it, too.

Szechuan Tasty House's hong shao rou.
Laura Shunk
Another highlight is the hong shao rou — the pork belly is nicely braised to a supple chew, and the meat is rich with fat without becoming oily. And don't miss the chance to see how this restaurant handles eggplant, sautéeing it until its edges are crisp and insides soft, never letting it approach slimy. Have it with fish-flavored sauce, which is really just a sweet-sour sauce that often bathes fish in Chinese cooking, or with fresh basil or minced pork. Speaking of fish-flavored sauce, Szechuan Tasty House offers a chance to sample yu xiang rou si, here translated as "sauteed shredded pork with fish flavored sauce," an Imperial Cuisine menu staple in China that tastes a bit like the precursor to sweet-and-sour chicken on American-Chinese menus. Finally, sautéed greens are always one of the most overlooked dishes on a Chinese menu; don't make that mistake here. Consider the lettuce with mashed garlic, which offers a nice light balance to heavier dishes. Spoon it over rice for best results.

The only things we'd avoid? The Szechuan meat dumplings in Chinese chile oil, which don't pick up enough flavor from the pools of oil on the plate, and the dry-fried string beans, of which there are better versions in Denver; our beans here were a bit limp.

Szechuan Tasty House's eggplant in fish-flavored sauce.
Laura Shunk
Szechuan Tasty House has no liquor license, so you can't pair your meal with beer, sadly. But there are sodas and Chinese soft drinks galore, as well as hot tea. If you hit this place when it's busy, know that cooking can take a while. But on less crowded nights, our food has hit the table nearly instantaneously.

One more note: Make sure you know what you're looking for when you set out. This restaurant still features the parking lot sign of the building's previous tenant, Fu Hao (it was Jackie Chan II before that), and it sits on a stretch of Evans almost entirely devoid of restaurants.