A few barrels of American pot-stilled whiskey aging at Talnua Distillery. Linnea Covington
Whiskey made in single-pot stills isn't common in the U.S., but it's an old and honorable way of making Irish whiskey that dates back to the late 1700s, according to Patrick and Meagan Miller, the owners of Talnua Distillery in Arvada. In fact, the method was the only way they wanted to produce spirits once they decided to open Talnua.

True Irish single-pot still whiskey must meet several criteria: It must contain at least 30 percent each of malted and un-malted barley, it must be made in a traditional copper pot still, and it must be distilled in Ireland. The Millers obviously couldn't fulfill that last requirement in Arvada, but that's okay with them.

"We aren't trying to be Irish whiskey, and we're careful about using the word 'Irish' on our labels," says Maya Oren, the distillery's general manager. "That's why it's called American Pot Still Whiskey."
click to enlarge Even if Talnua American Pot Still Whiskey isn't truly Irish Whiskey, it's worth seeking out as a rare example of a whiskey style seldom found outside of the Emerald Isle. In 2012, there wasn't anyone in the United States dabbling this type of spirit, and at the end of 2014 there wasn't a distillery in Colorado making it. In fact, even in 2021, there are only a handful of producers in the country.

The Millers, who have Irish ancestors, started their research in Ireland and talked to many distillers there. Then Patrick honed his whiskey-making skills while working for Stranahan's Colorado Whiskey. Home experiments also helped the couple dial in the flavors they were looking for. They also needed to find the right space, which came in the form of a former distillery in Arvada's warehouse area. The couple built out the whole thing themselves, with the help of some friends.

Talnua started production in 2017, but the tasting room and product launch didn't happen until 2019. All the whiskey is distilled and aged in-house, using water from Eldorado Springs. Currently the distillery sells four products: Continuum Cask Whiskey, Heritage Selection Whiskey, Barrel Finished Gin and American Single Pot Still Gin, both formulated as Dutch-style gins (which are usually made with a grain bill similar to whiskey). There's also a cold-pressed coffee liqueur available, but Oren says it's almost out of stock.
click to enlarge 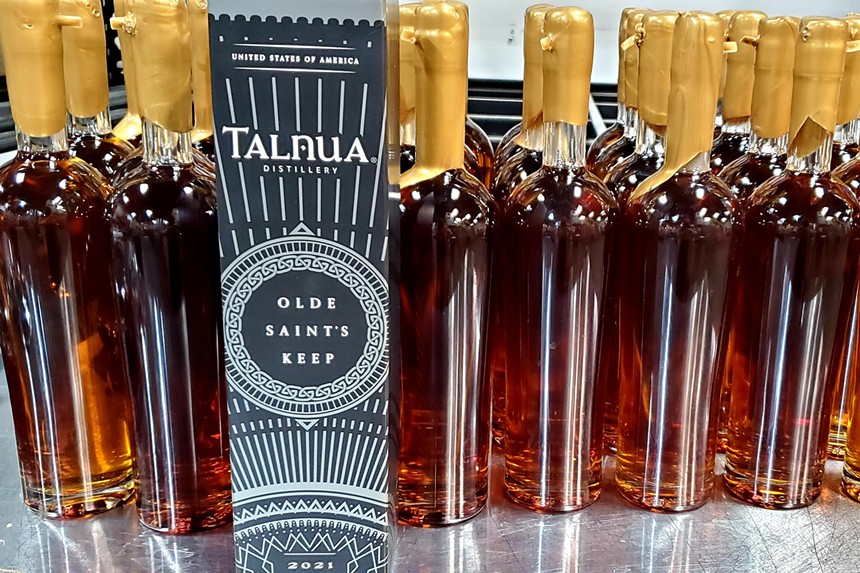 Talnua Distillery's Olde Saint's Keep whiskey was aged in sherry barrels this year and will be released on March 13.
Linnea Covington

This Saturday, March 13, the distillery will release a seasonal favorite, Olde Saint's Keep, which was aged in Pedro Ximénez and amontillado sherry casks and runs about $80 a bottle. Then on March 17, Talnua will release its first three-year-old whiskey, Founder's Reserve. There are only 200 bottles, which will only be available at the distillery at $100 per bottle.

The single-pot still style of whiskey has a long history in Ireland; it started as a way to avoid a malted barley tax, which the British introduced in 1785. Although the tax was repealed in 1855, single-pot stills remained popular for decades, up until the late nineteenth century, when the column still, patented by Irishman Aeneas Coffey, became popular, and blended whiskeys, especially the ones made in Scotland, started infiltrating the spirits scene.
click to enlarge Single-pot still whiskey nearly disappeared, with only a couple of operations making it. The Millers didn't really know about the style until they visited a pub in Galway, Ireland, while on their honeymoon in 2011 and were introduced to Redbreast. A distillery rep happened to come in at the same time, and over samples and descriptions from the rep and the bartender, they realized it was the direction they wanted to go.

The Millers named their distillery Talnua, which approximates the words "new land" in Irish Gaelic, to pay homage to their ancestors. Talnua symbolizes an old-world style of distilling in a new country. The company's insignia also speaks to these ideas with its images of a Rocky Mountain bighorn sheep (the official state animal of Colorado) looking back at a triskele moon, an ancient Celtic symbol.

Talnua celebrates the link between Ireland and Colorado in its tasting room and logo.
Linnea Covington
Join Talnua Distillery for the annual St. Patrick's Day festivities and its anniversary party this weekend on March 13 and 14 from noon to 10 p.m., weather permitting, as well as on March 20 and 21, extra dates the Millers added in case the pending snowstorm cancels the first weekend. Customers can also purchase bottles at the tasting room where the small staff of seven pours flights and cocktails. Currently, Talnua whiskey and gin can be found in select bars and liquor stores around metro Denver, but plans are in the works to expand nationwide soon. In fact, the team just installed new stills that will triple production.

Talnua Distillery is located at 5405 West 56th Avenue in Arvada and is generally open from Wednesday through Sunday. Call 303-431-4949 or visit the Talnua website for current hours, find tasting notes or sign up for an online cocktail class.
KEEP WESTWORD FREE... Since we started Westword, it has been defined as the free, independent voice of Denver, and we'd like to keep it that way. With local media under siege, it's more important than ever for us to rally support behind funding our local journalism. You can help by participating in our "I Support" program, allowing us to keep offering readers access to our incisive coverage of local news, food and culture with no paywalls.
Make a one-time donation today for as little as $1.