The Preservery Closing September 4, Owners to Start a Nonprofit to Feed the Homeless Owners Whitney and Obe Ariss are closing the Preservery, but have big plans for the future. The Preservery
"We are not saying 'goodbye' but we are closing for good," is the title of a blog post published on August 26 by Whitney Ariss, who co-owns the Preservery at 3040 Blake Street with her husband, Obe. They opened the restaurant offering new American fare in a marketplace setting, along with live music, back in 2016.

This week, the Preservery will be open for brunch only, from 11 a.m. to 2 p.m. Tuesday through Friday and 10 a.m. to 2 p.m. Saturday and Sunday, September 4, its final day. After that, the couple will focus on a new venture: The Preservery Foundation. The final two brunch services will be specialty: Saturday's features a East Coast vs. West Coast rapper battle, and Sunday's theme is "Brunchstock," with music from the ’60s. There will be brunch specials and "probably be a few surprises mixed in there," Whitney says.

The decision to close was driven by several factors, the couple says. "As long as we were tenants renting from a landlord, we were always going to be handing over any modest profits toward the cause of making a wealthy person (or company) even wealthier," Whitney writes, noting that the rent on their RiNo location has increased almost 30 percent since the initial lease was signed in 2015. The couple did look into moving the Preservery, but the time and cost to redesign and build out a new space didn't make sense. "We'd essentially be starting from scratch," she says.

So the couple sold the business, though they will keep ownership of the name Preservery. Whitney couldn't reveal who bought the business, but shared that it is "an existing local company that will be a good fit for the neighborhood." That new company is set to take over the lease on October 1, though an opening date is yet to be announced.

Whitney also talks about the time commitment and personal sacrifices required to run a restaurant. "Our constant presence at the restaurant came at the expense of time spent with friends, family and our only daughter, Adira," she says. The day their daughter was born, she adds, her husband took her to the hospital "in the morning after my water unexpectedly broke a full month before my due date. They determined I needed a C-section, which they scheduled for the afternoon, so Obe went to work to help get the team ready for one of the busiest services of the year, came back to the hospital to witness the birth, then went back to work again for dinner service." 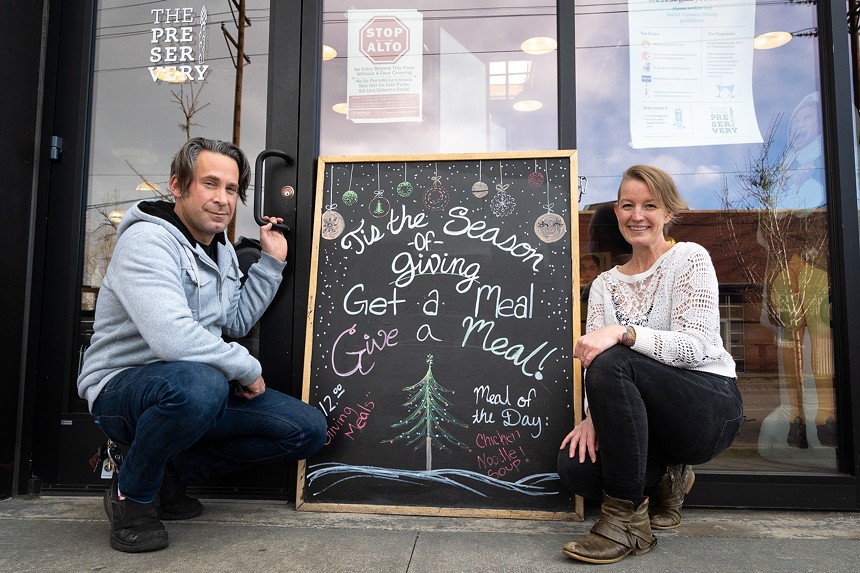 The Arisses were inspired to start a nonprofit through feeding those in need during the pandemic.
Ken Hamblin
The pandemic added more stress to the situation as the couple navigated indoor dining restrictions and the logistics of outdoor dining in the winter, just as they had begun "hitting our stride," she writes.

Then, in December 2020, spurred on by "seeing numerous tent encampments around the neighborhood looking both vulnerable and brave, all blanketed in white," the couple decided to focus on a new effort: asking the community to help provide meals for those in need.

They have already hand-delivered 4,000 meals since the endeavor began, all of which have been purchased by customers who bought a $12 meal to feed themselves and a person in need, or spent $6 on a straight-up gift. The price, Whitney says, covers both labor and costs. Meals are still available for purchase online or at the restaurant through September 4.

The Arisses will do a final Preservery-kitchen-prepared delivery after September 4. While they are without a kitchen after that, Whitney hopes to partner with restaurants to make the meals at a similar price point, which Obe will hand-deliver to encampments around the city

Opening another brick-and-mortar is likely on the horizon.The Arisses have already looked at some spaces, but because they are dedicated to renovating an older building, Whitney says it's been difficult to find something affordable and in the city. They are determined to stay within Denver's downtown area (ideally around RiNo, Five Points or Uptown). What, exactly, will be in the space will depend on where they move. "The building kind of tells you what we're going to do," she comments. They are open to another restaurant, but will likely start with production of the nonprofit meals. They may also teach cooking classes, as Whitney has already begun doing for children.

The couple is looking at other ventures, as well. "Obe has, his whole life, wanted to do something with cars, and is pursuing racing as well as managing a really fun and informative social media account, @iwouldbuythisride," Whitney adds.

Also in the works: more travel as a family, and quality time with Adira. But the foundation will be the focus of much of their attention.

"We can’t dismantle racism, we can’t end the housing crisis, we can’t solve world hunger, but we can do our best to help make sure the most vulnerable, disenfranchised folks in our community get the chance to go to bed with a full belly, because that is what every human deserves," Whitney concludes.
KEEP WESTWORD FREE... Since we started Westword, it has been defined as the free, independent voice of Denver, and we'd like to keep it that way. With local media under siege, it's more important than ever for us to rally support behind funding our local journalism. You can help by participating in our "I Support" program, allowing us to keep offering readers access to our incisive coverage of local news, food and culture with no paywalls.
Make a one-time donation today for as little as $1.