The Preservery Foundation Partners With Nocturne to Feed Denver’s Homeless 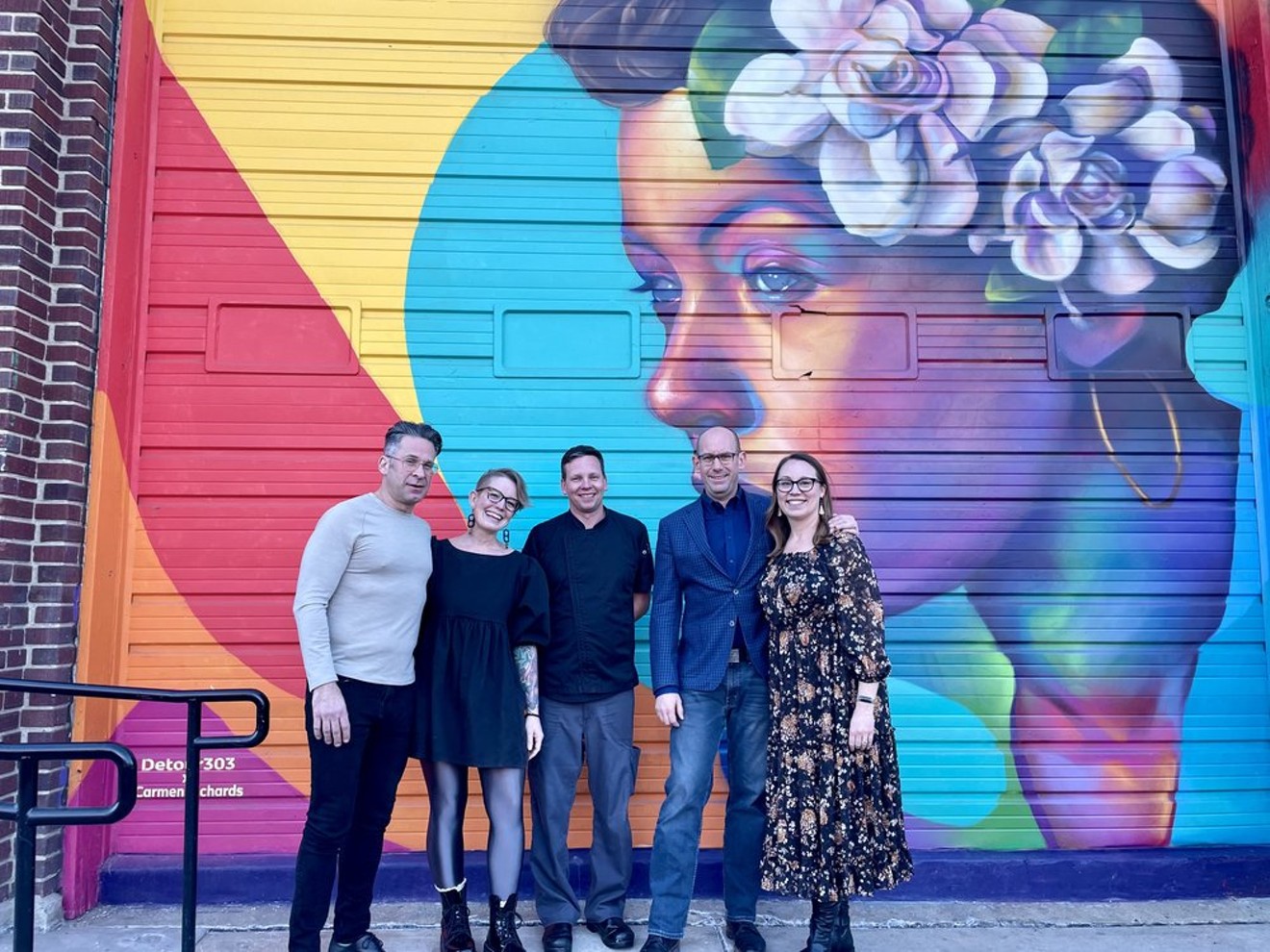 Obe and Whitney Ariss (left) with Nocturne co-owners chef Dustin Beckner and Scott and Nicole Mattson. The Preservery Foundation
“No other restaurant seems to capture the direction of Denver’s food scene," wrote former Westword critic Gretchen Kurtz in her 2016 review of the Preservery, which had opened at 3040 Blake Street in the RiNo neighborhood five months prior.

Since then, a global pandemic rocked the restaurant industry and the city as a whole, and Denver’s unsheltered homeless population has experienced a 32.8 percent increase from January 2020 to January 2022.

Whitney Ariss, who co-owned the Preservery with her husband, Obe, remembers seeing “a lot of tent encampments” and “folks subjected to the elements and conditions [created] when the weather gets really bad" on their daily commute from Uptown to Five Points in 2020.

“It was December [2020] when we had our first really big snowstorm,” she recalls. “We had this big, beautiful kitchen and a whole team of people that earnestly wanted to cook — and just barely any business, because we were totally shut down for indoor dining. ... It dawned on me, ‘Why don’t we see if we can get our guests and the community to purchase meals for folks who really need them?’ We got an amazing response, and so we created the Giving Meals program."

The program is what led to the creation of the Preservery Foundation, which aims to “build community through food by providing hunger relief to people experiencing homelessness," according to its mission statement. On September 4, the Arisses closed the Preservery restaurant in order to focus on the nonprofit full-time. 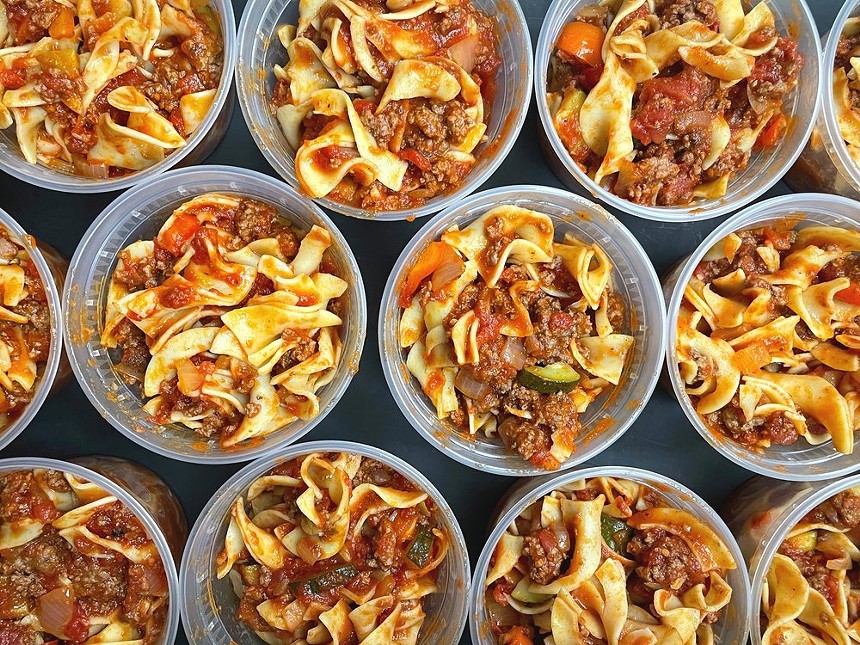 Hot, wholesome meals prepared in Nocturne’s kitchen.
The Preservery Foundation
Specifically, the foundation focuses on those without temporary housing. This population makes up roughly 30 percent of those experiencing homelessness in metro Denver, according to Ariss's blog post titled “Restaurants can help Fight Hunger!”

One of the restaurants fighting for this cause is Nocturne, a swanky jazz and supper club located at 1330 27th Street. Co-owner Nicole Mattson met Ariss at an event hosted by Women Who Startup Denver in 2015.

“I followed [the Arisses’] progress as they opened up the Preservery, which happened to be in the same neighborhood as Nocturne. When we found out that they were shifting gears, closing the restaurant and opening up a foundation, I decided to reach out and see what we could do to help,” says Mattson.

She explains: “They were [making] their Giving Meals at the Preservery, so I knew that when they were leaving, that would leave them without a kitchen. We don’t use our kitchen on Mondays and Tuesdays because we’re closed, and so I thought maybe this could be an opportunity for them.”

Nocturne formed an official partnership with the Preservery Foundation in December. The last time the Arisses were in, Mattson notes, they put together around 170 meals in one day. “In addition to offering up our kitchen space, we’re also offering the possibility for our guests to donate when they make their reservations. It’s really easy to just add on an extra $10 that goes straight to [helping] feed somebody in need,” she adds. “Our staff is super excited about this partnership as well. We have talked to our team about donating their time, getting some of our staff to go along with [the foundation] for the distribution of meals.” 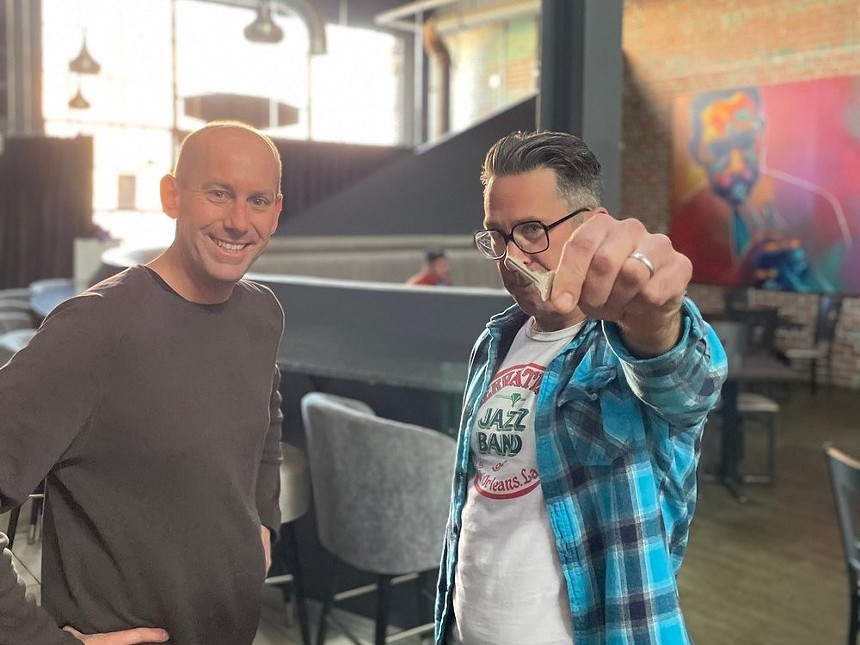 Scott Mattson (left) and Obe Ariss (right), displaying his new key to the Nocturne kitchen.
The Preservery Foundation
Ariss believes that those in the restaurant industry are the ideal people to do this work. “I think we are all in this business because we get a lot of joy out of feeding people — and these people are the most in need," she points out. "They’re the most disenfranchised people in our community, and they don’t often know when their next meal is coming.”

While she is passionate about this work, Ariss admits that it is also challenging. “Obe and I are only capable of so much output with just the two of us,” she explains. “It’s striking how quickly meals go. We always make at least 100 and we go out, [and] everything’s gone in like twenty minutes. We hit maybe a two- to three- to six-block radius. And obviously, there are so many more people that need this kind of help.”

Since the endeavor started, the Preservery Foundation has hand-delivered more than 4,000 hot, wholesome meals. “Each meal has a balance of protein, vegetable, starch and fat in order to maximize nutrition and satiation,” states the nonprofit’s website.

“When we go out for meal distributions, we also always provide individually wrapped toilet paper, hand sanitizer and bottled water," Ariss notes. "Those were the most common things that people asked for when we first started doing this work.”

Material donations of this sort “would be hugely helpful,” Whitney confirms, adding, “We hope to expand our reach by building up a volunteer workforce. If anyone is interested in donating their time, message me directly [on social media].” Currently, the organization is working on coordinating how volunteers can support meal distribution efforts.

“To actually talk to people, to see their hands, and to see the looks on their faces when they realize it’s a hot meal — that’s always a big bonus, for sure,” Ariss says.

Perhaps Kurtz's writing will hold true. Could the Preservery continue to “capture the direction of Denver’s food scene"? That's exactly what Ariss would like to see. “From our own experience, we know that restaurants are uniquely suited to fight hunger — not by donating money, but by donating certified kitchen space as well as kitchen talent and even food," she writes. "We hope to be the catalyst that enables restaurants to give back without hurting their bottom line.”
KEEP WESTWORD FREE... Since we started Westword, it has been defined as the free, independent voice of Denver, and we'd like to keep it that way. With local media under siege, it's more important than ever for us to rally support behind funding our local journalism. You can help by participating in our "I Support" program, allowing us to keep offering readers access to our incisive coverage of local news, food and culture with no paywalls.
Make a one-time donation today for as little as $1.