Two Parts Wants to Know: Are You Having Fun Yet? 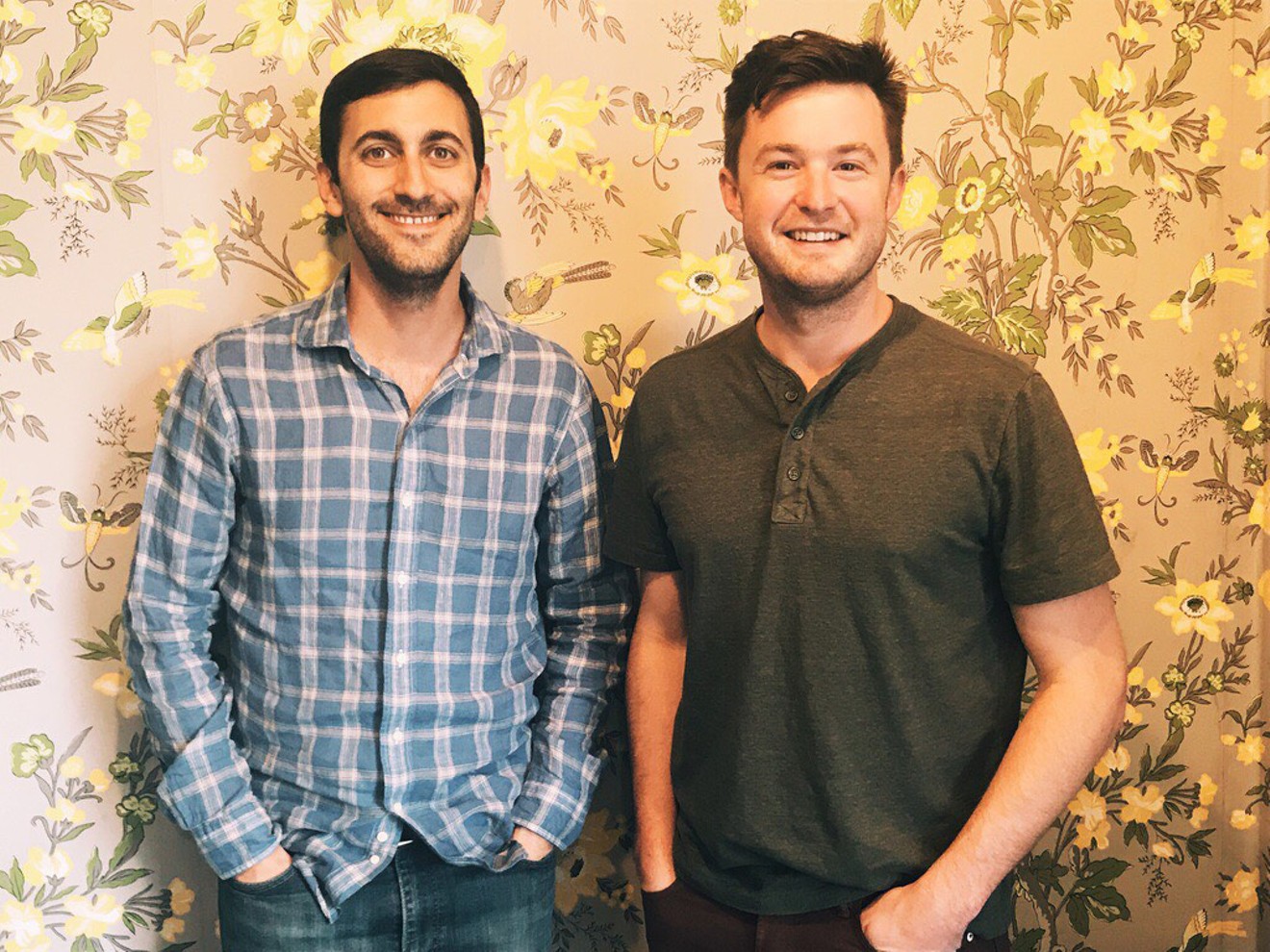 Boys just wanna have fun: PJ Hoberman (left) and Casey Berry of Two Parts. Aubrey Gordon
Back in 2012, Casey Berry, a fun-loving Florida native who was working at a local law firm, pitched me an idea for Imbibe, an events website designed to get Denverites out to explore their city. “Moving to Denver, there was all this cool stuff starting to happen, but there was no resource to tell you how to get to it,” he recalls. “Too many people were just going out downtown. There’s nothing wrong with that, but there’s more to Denver. I had this idea that I could create community-driven events to get people out and create elevated experiences that people could experience on their own time.”

His idea sounded good, but I was about to leave Denver for life in New York, so I put him in touch with another friend, PJ Hoberman, an enthusiastic beer geek and coder who happens to have a brain for business.

Hoberman had launched the drinking website Denver Off the Wagon, where he and a band of buddies covered the local drinking scene, serving up everything from events info to bar reviews to spirits education. “It was a fun little group of alcohol hobbyists and professionals in Denver,” remembers Hoberman. Thanks to the expertise of those contributors — many of whom were local bartenders or on the path to opening breweries — Wagon had quickly become a trusted resource on what was cool in the city. And it had just started throwing its own events.

Festivus was just the first of many festivals.
Lindsey Bartlett
Berry and Hoberman met at Star Bar for what would become one of the most successful blind dates I ever facilitated. That meeting marked the very beginning of Two Parts, an experiential marketing agency that has redefined community events in Denver, in the process making a massive impact on the local food and beverage industry. Two Parts throws beer, spirits, wine and food festivals; manages, promotes or handles ticketing for many of the city’s big events; and runs the Passport program, which nets buyers two-for-one drinks in bars. And in January, the company bought the Underground Music Showcase from the Denver Post Foundation, making its first foray into music.

Two Parts has done all of this without taking a cent of investor money. That’s pretty remarkable for a couple of guys who started out just wanting to make sure Denver had more fun.

As Berry first envisioned Imbibe, he imagined working with breweries and theaters to create unique offerings showcasing their space, then selling passes that could be cashed in within a certain time period. But he quickly hit a snag. “I quit my job, and literally a month into it, there were 98 competitors of Groupon, and Living Social became a billion-dollar company in what felt like a day,” he says. “I was deep into building a website. We’d make a sales call, and we’d hear, ‘This is ruining small business.’ No one would even listen to the idea.”

Collaboration Fest, founded by Two Parts, is now one of the country's top craft beer festivals.
Danielle Lirette
That’s when he met Hoberman, and while they hit it off, they didn’t team up immediately. “It was a blind business date,” remembers Berry. “I wanted content, he wanted to get into events. We asked: Are we competing, or are we friends? We didn’t have enough experience to know what that meant.”

Over the next few months, Berry pushed ahead with his events. “We did a crazy movie event, we launched Our Mutual Friend brewery, we’d do dinner pairings,” he says. “I lost money on every single one. But it was great because it was fun — we were just doing cool shit and trying to build the community.” Hoberman, meanwhile, continued working at his day job at MapMyFitness and tending Wagon. The two were in near constant touch, though, offering feedback on each other’s work and collaborating loosely on a few projects.

In the fall of 2012, they decided to team up for their first festival, Festivus, a showcase of Denver-only breweries during the holidays. They promoted the event at the Great American Beer Festival, where Hoberman dropped business cards at every booth, and plastered posters across the city. “We had this grand plan that we’d sell tickets for $30 in October, and then the price would go up to $40 in November,” says Hoberman. “We sold all but fifty tickets in October — and we’d had 450 for sale. That was $4,000 of revenue we didn’t see.”

But they learned other valuable lessons, including what it meant to organize the right event at the right time. Festivus sold out early, and for the first time, Berry saw complete strangers signing up for one of his projects. More important, the nineteen breweries that were part of that inaugural festival were impressed by the team’s obsessive attention to detail, and soon breweries were asking the duo to plan and execute their events, too.
“That’s when I realized I could probably quit my job,” says Hoberman. “There might be a business that could support two of us.”

Hoberman finally gave notice in April 2013, joining Berry full-time at Imbibe, and the partners focused on building a few signature concepts. They launched the Denver Passport late that spring, giving drinkers two-for-one deals at some of the most beloved bars in the city. The inaugural Sesh Fest went off that summer, bringing together imbibers for an afternoon of drinking low-alcohol sessionable beers on the lawn. “That year, we were learning what our business could be,” says Berry.

“We didn’t have a business,” corrects Hoberman, who was still running Denver Off the Wagon on the side. “Our accounting was in Google sheets. We didn’t invoice. Our ticketing system was a physical list.”

They were learning how to execute event logistics on an increasingly larger scale, though, and even as they were throwing bigger and bigger events, they were taking on clients who wanted them to organize, promote or ticket events. In 2014 they started Collaboration Fest, showcasing beers brewed by at least two breweries, and the next year they teamed up with another partner on the first Denver Flea. (They’ve since parted ways.) They also brought on their first full-time staffer, which both partners identify as the point at which they realized they were running a real business. “There was no ‘aha moment,’” says Hoberman. “It was just, we need people to do this work, and we knew what the work meant.”

In early 2016, the partners renamed their company Two Parts. Today, they consider their ever-evolving business “a one-stop shop for marketing identity and experiential work,” says Berry. Two Parts has about forty clients and still manages its own core concepts: Sesh Fest, Collaboration Fest, Festivus and the Passport, which has expanded to ten cities and morphed into multiple offerings, including a summer and winter version and a coffee passport. The company also runs the Big Eat and Harvest Week for EatDenver, the city’s independent restaurant network. Last fall, Two Parts threw a food truck and live music event called Truck Stop, which attracted 10,000 people. And now it owns the Underground Music Showcase, another Denver institution.

“Music was...something we always wanted to be in, but it was not quite our scene,” says Berry. “We felt it was competitive. Music is always a big component of our events, but our niche is food and beverage. But our office is run by music nerds, and [UMS] was too good of a Denver identity to pass up. It’s nice that we don’t have to start at square one. Overnight, we completed all the factors for festivals and entertainment — we have food, beverage, music and arts.”

Even as they continue to produce their existing events, Berry and Hoberman spend a good deal of their time, both professionally and outside of work, trying to figure out how to make Denver even better. They realize that they’re operating in a very different city than they were in 2012. “There are so many new people in Denver,” says Hoberman. “We’re helping to say what a festival should be — what you should get for the value of a ticket.
There are a lot more festivals now than there were back then. We hope we’re seen as the standard, as what you should expect if you throw down $40 or $100. And breweries look to us for what to expect from other event producers.”

One key to Two Parts’ success, the owners agree, is its deeply collaborative nature. “Because we go to the breweries, we know the breweries, we know the brewers and we treat them better,” says Hoberman. “That’s unique; it’s not just, I want to make money off a beer festival. We all like doing cool shit.” They know bars, too: Berry is one of four partners behind Silver Plume’s Bread Bar, while Hoberman owns Bellwether with Matchbox proprietor Justin Anthony. That gives them unique insight into their bar clients.

Another key? Staying local, even if it restricts the company’s potential. “We’re slow to grow outside of Denver because we care so much about the locality piece,” says Berry.

“We don’t want to run a local craft-beer company in San Diego from Denver,” adds Hoberman. For their Passport programs outside of Denver, “we have local people run it,” he notes.

So what’s next, then? “Bigger agency clients,” says Berry, and more events. In fact, Two Parts has started an incubator to come up with even more events and new concepts for restaurants and breweries.

“We’ve got some other new ideas that we want to pour gas on and grow,” concludes Hoberman.

Are we having fun yet?