First Look: Water Grill Will Get in the Swim on February 9 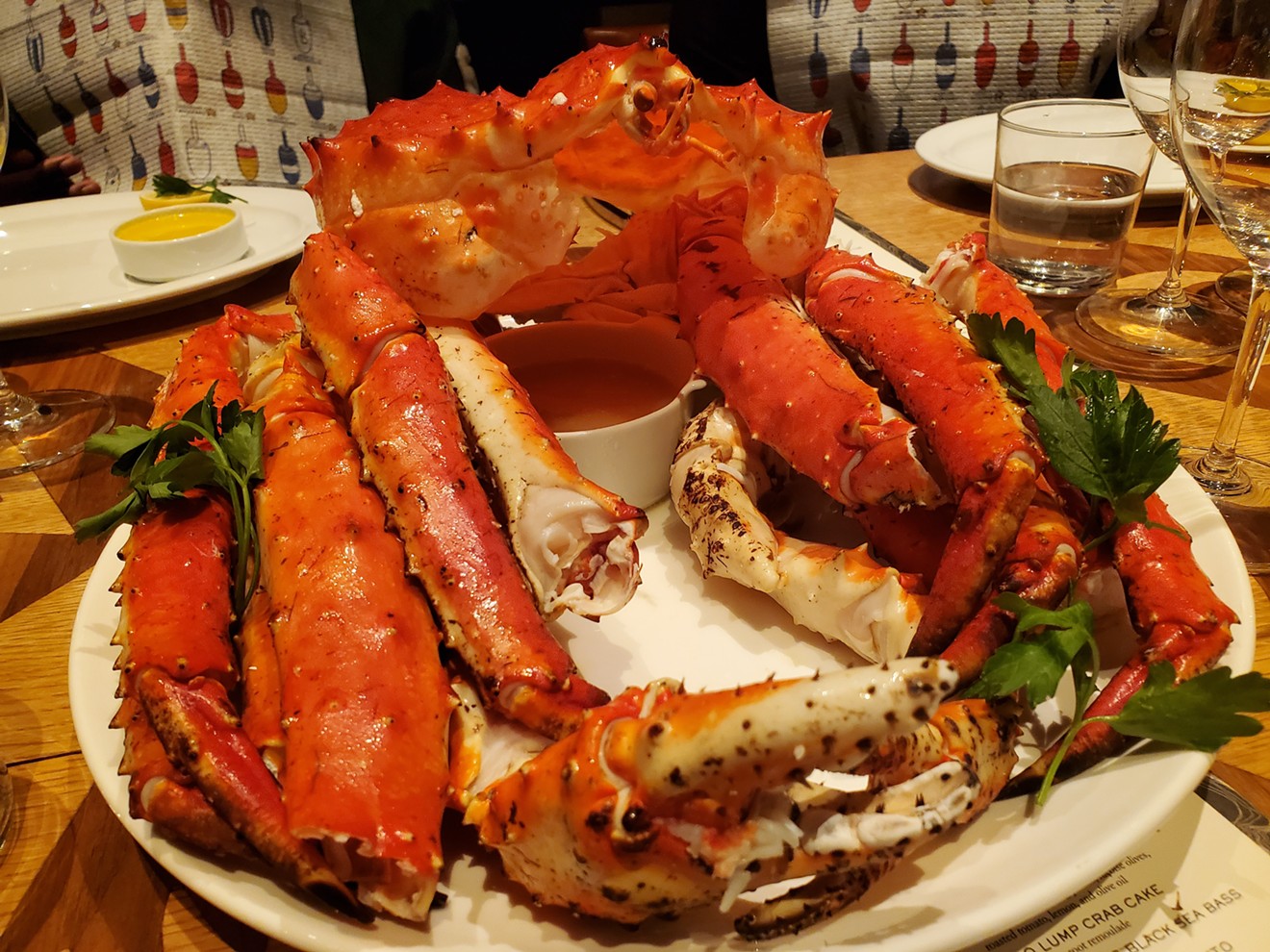 Captain's chairs line the bar.
Molly Martin
What we saw: This place is huge — 200 seats huge, and that's on the smaller side for Water Grill, which has four locations in California and one in Las Vegas.

Heavy on the wood and brass accents (including the bar top, which must be polished daily), the design of Water Grill is meant to mimic the feeling of being in the bow of a (super-spacious) ship. The maritime-inspired decor may seem a bit out of place in landlocked Denver, but the restaurant's owners, King's Seafood Company, hope to help change the perception that the Mile High City can't do seafood.

The family-owned seafood distribution company has been in operation for over seventy years, and opened its first Water Grill in downtown Los Angeles in 1989. With a dedication to transparent, sustainable sourcing, it has a well-earned reputation as a quality source of seafood, and it's confident that it will live up to that reputation in Denver — despite this city's distance from the ocean. Live king crab is shipped in on a regular basis.
Molly Martin
One key to serving fresh seafood in Denver is an international airport — which means it can take just a few hours for the goods (much of it shipped live) to arrive. From there, it's all about proper treatment and storage, which the team behind Water Grill knows all about.

A major point of pride for Water Grill is its live bar, which stocks sixteen to twenty different kinds of oysters on a daily basis, along with other specialties like red sea urchin (or uni). Correct harvesting of oysters can help restore local waterways in places like the Chesapeake Bay — one of the areas from which Water Grill sources, as do other local seafood-focused eateries such as Jax Fish House.

Along with massive iced shellfish platters ($54-$180), there's a lineup of appetizers and a small selection of sushi — try the indulgent Honeymoon Oyster ($13) with uni roe, tobiko, ikura and a quail egg — along with four rolls ($18-$30). Salads, sandwiches, crustacean preparations, whole fish, entrees like the fish and chips with wild Icelandic cod ($34) and a selection of steaks, including a 45-day dry-aged prime rib bone-in ribeye ($77), round out the offerings. This is definitely special occasion-worthy fare, and it's priced to match. There are sixteen to twenty kinds of oysters available from the raw bar daily.
Molly Martin

What surprised us: Water Grill's passion for sourcing — though not necessarily surprising for a longtime seafood company — is documented by a slideshow that includes dozens of photos from trips when the owners visited the people who supply each species. It's clear that the family behind Water Grill does more than just talk about sustainability.

The North American lobsters come from one fisherman in Maine. The hard-harvested uni is caught by a woman who dives into dangerous waters off Santa Barbara to collect the spiny creatures. Many of the items are only available seasonally, such as spot prawns; that season opens this week, and there are only 28 people licensed to catch them. Water Grill will have spot prawns on the menu soon.

Spiny lobster ($62 per pound) is another seasonal offering that's currently available. Caught wild in California, this lobster has meat that is sweeter and more firm than that of its siblings along the East Coast. It's served simply here, chargrilled, with plenty of butter for dunking and a side of coleslaw.

Water Grill isn't the first restaurant to bring high-quality seafood to Denver (see also Sushi Den, the aforementioned Jax and Stoic & Genuine, to name a few), but it's quite a catch for Denver. Whole fish ceviche is an off-the-menu item because there's only a limited number available every day.
Molly Martin
click to enlarge Save room for salted caramel bread pudding.
Molly Martin
KEEP WESTWORD FREE... Since we started Westword, it has been defined as the free, independent voice of Denver, and we'd like to keep it that way. With local media under siege, it's more important than ever for us to rally support behind funding our local journalism. You can help by participating in our "I Support" program, allowing us to keep offering readers access to our incisive coverage of local news, food and culture with no paywalls.
Make a one-time donation today for as little as $1.