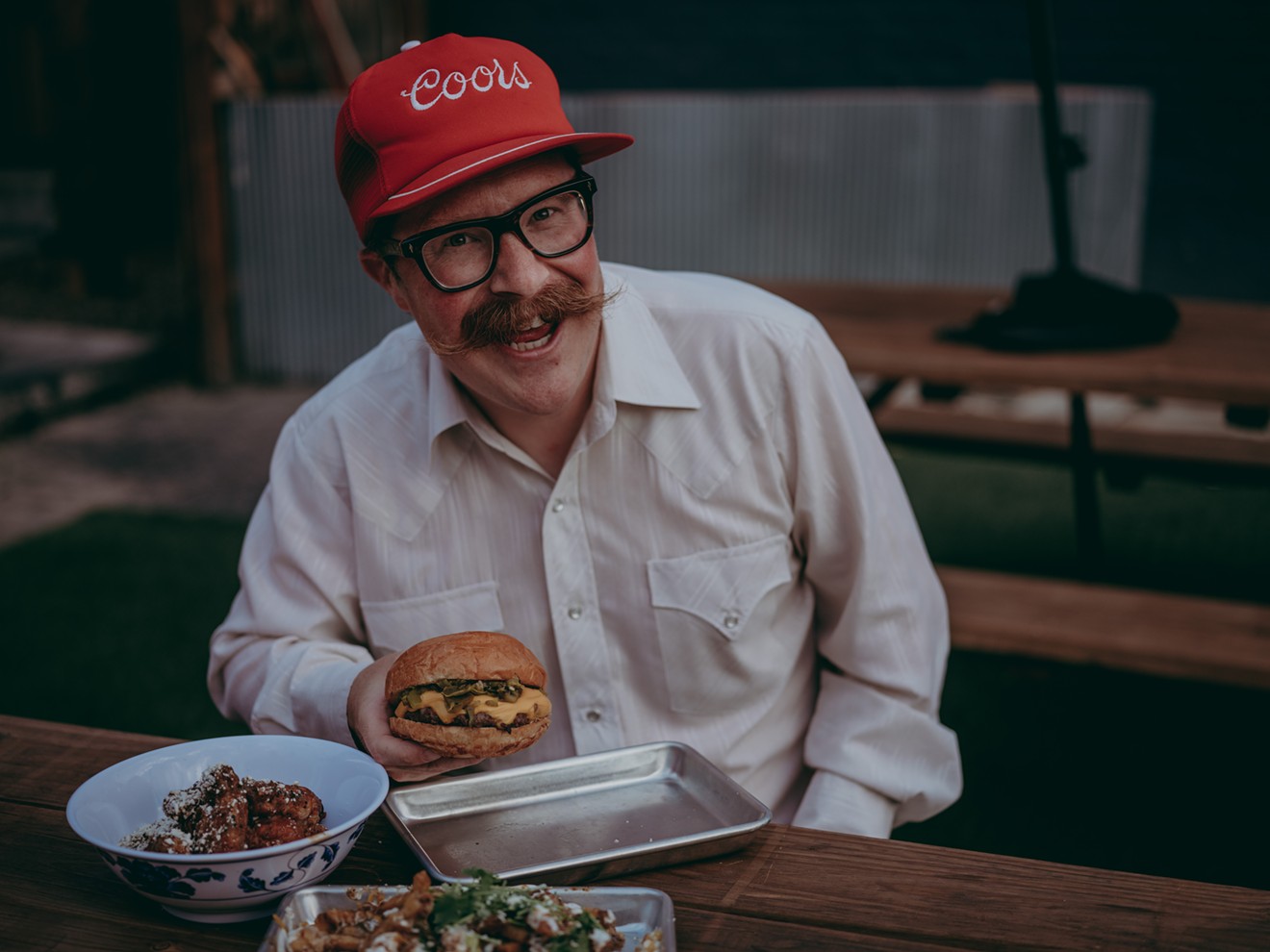 Will Dozier loves the green chile cheeseburger at Adobo. Lynn Thayer
"My wife thinks it's getting a little insane," says Will Dozier, "but I'm really enjoying it." After making a bet with a friend, he's eaten green chile in one form or another every day since January 1 — though he was eating plenty of green chile before that, too.

Dozier, who currently does data analytics for a tech company in RiNo and splits his time between Denver and Salida, where his family settled in the 1880s, got an early introduction to Colorado's take on green chile stew during trips from his childhood home in Bailey to Denver. He and his father often stopped at Brewery Bar II, at 150 Kalamath Street. "I remember eating it at age seven or eight and being like, 'This is way too hot,'" he says. "Now, I'm like, 'Give it to me.'"

Before COVID, he'd purchase large amounts of fresh chiles every fall and invite friends over for a party where everyone pitched in to process and pack them (and take some home). "I think I bought fifteen bushels in 2019," he recalls. "Everything from mild all the way up to Pueblo dynamite and Hatch extra hot."

And yes, he has a Pueblo green chile license plate on his car.

While working from home during the pandemic, Dozier got into the habit of regularly eating tamales from Pochitos Tortilla Factory, which is located at 4421 Tejon Street — conveniently close to his house. When he casually mentioned to a friend that he thought he was basically eating green chile every day, the friend countered: "I'll bet you can't do it for a year straight." And so a friendly wager was born.

"It's all on the honor system," Dozier says, and there's no prize on the line. "It's just been a fun thing," he adds, now over 200 days into the challenge. Processing chiles is more fun with friends.
Will Dozier
"Some days it's harder than others," he admits. Particularly in the beginning, when he unexpectedly began having stomach problems because of the high amount of Vitamin C in green chiles — one pod can have as much Vitamin C as six oranges. "I was putting a lot of green chiles on everything," he remembers. "I just had to slow down. Vitamin C-you-later."

But Dozier didn't let that bout of discomfort stop him, and he's kept up the bet even when he's been far from home. On a recent trip to Mexico, he took along a six-pack of green chile beer and green chile seasoning from Flat Iron Pepper Co. "Obviously, you can get spicy food and chiles in Mexico, but not what I'd consider the kind that count toward what I'm trying to accomplish," he says.

He makes green chile stew at home frequently using an old recipe from a co-worker's dad who grew up in Trinidad. Thickened with a roux and very "green chile-forward," Dozier notes, its secret ingredient is bay leaves, and it uses a double-frying technique for the diced pork butt or loin. He's also a fan of the recipe printed on one of Nathaniel Rateliff's merch shirts, which starts by rendering bacon fat that's used as the base for building flavors.

When he wants to eat green chile at restaurants, in addition to those Pochitos tamales, Dozier's Denver go-tos include Adobo, which started as a food truck and now has a location inside First Draft in RiNo and its newest outpost, a brick-and-mortar at 3109 Federal Boulevard. Owner Blaine Baggao is originally from New Mexico, and his green chile (one of our picks for the ten best in Denver) is vegan, with the option to add smoked carnitas. He also makes some unexpected items with green chile, including deviled eggs and wontons, offering Dozier the chance to change up his diet from time to time while still getting a green chile fix.

Shake Shack's Green Chile Cheddarshack with a beer at Our Mutual Friend.
Will Dozier

Smoked pork is also used in the green chile at Post Oak Barbecue on Tennyson Street, which Dozier obviously had to try when he visited. "If there's green chile on a menu, I'm going to order it," he says.

The Original Chubby's, at 1231 West 38th Avenue, also remains a favorite for Dozier, though he admits that its appeal is mostly nostalgic. At La Fiesta, he always gets the Mexican hamburger. Lechuga's meatball canoli with a strip of green chile inside is another classic, and a stop he makes every time he's in that part of town. And in a pinch, Dozier will sometimes opt for the Green Chile Cheddarshack at Shake Shack, which is only available at Colorado locations and comes topped with a zippy mixture of marinated green chiles and green onions.

Recently, Dozier switched it up by trying two new spots. At the Burro King, 6500 Smith Road, he enjoyed the breakfast burrito, which he normally orders with chicharrones instead of the more typical bacon, sausage or chorizo. Lucero's, at 3657 Fillmore Street, "felt like old-school Denver to me," he says, with its orange-and-blue paint job and catchy slogan: "You've tried the rest, now try the best." Another old-school favorite: Curtis Park Creamery, at 908 30th Street, which has been open since 1969 and, despite its name, is "definitely not an ice cream shop," Dozier notes.

When in Salida, he likes to stock up on items made with green chiles at the farmers' market. "There's a Turkish bakery there that makes green chile pastries and another that makes green chile bialy," he says.  The town is also home to Pizza Rio, which serves another Dozier favorite: the Big Drop pizza, topped with goat cheese, roasted garlic, Italian sausage, basil and green chiles. Nearby, at Soulcraft Brewery, he recommends a pint of the Green Chile Ale. Beer is just one of a "multitude of products" made with green chiles, he says, and he's found a lot of them at the Chili Guys, a store at 5501 Federal Boulevard that offers plenty of actual chiles as well as chile-spiked items, from beans and salsa to chips and peanut brittle.

Even Dozier's friends have gotten into the spirit. "I have a buddy who's a baker, and he made a green chile panettone for me," he says. Another baked up some green chile chocolate chip cookies, and Dozier himself made a batch of green chile vanilla ice cream. "Some people said it had too much green chile," he admits,  "but I said, 'No, you can't have too much.'"

In late July, Dozier traveled to New Mexico to watch the Albuquerque Isotopes minor-league team play its annual game under the name the Green Chili Cheeseburgers. Green chile is deeply rooted in the culture of that state, and Dozier has spent a lot of time there; he even got married in Santa Fe. But don't expect him to take sides in the New Mexico green versus Colorado green debate. "If it's got green chile in it, I like it," he says. "I get it, people like the rivalry, but there's a place for everybody's chiles. There's no bad chile. There's only better chile."

One episode in particular proves that a love for green chile crosses state lines, he says, and it began with a bathroom stop while he was driving back to Colorado from a skiing trip in Taos. Just before reaching the Colorado border on Highway 285, Dozier pulled into the parking lot of Chili Line Depot in Tres Piedras, New Mexico. "I had to buy something, and I saw that they had green chile apple pie, so I got a slice, and it was fantastic," he remembers. Made with pinyon nuts and red chile-spiced apples, it remains "one of my favorite things that I've ever had," he declares. He even got twenty of the pies to serve at his wedding. If you find yourself in Tres Piedras, New Mexico, stop at Chili Line Depot for a green chile apple pie.
Chili Line Depot/Facebook
Now it's a tradition to eat one with his wife every year on their anniversary — but that was a challenge in 2020. Dozier emailed Chili Line Depot and offered to pay to have one shipped to Bailey, where they'd be celebrating, and the shop's owners, Deb and Gill Grades, agreed. But as the anniversary date got closer, there was no word on the pie.

"Two days before our anniversary, I hear from Deb, who says, 'I've got this guy, Big Bill, he's trucking out of Alamosa, and I think he can drop the pies off to you,'" Dozier recalls. But then Deb took things even further. "She said, 'Never mind, maybe my husband and I will just drive them ourselves.'"

And that's exactly what they did, much to Dozier's disbelief. "She drove four pies all the way from New Mexico to Bailey, and we got to meet Deb and Gill," he says. "I just fell in love with that restaurant. It's the kind of place you don't see very often these days."

Dozier is currently working through the logistics of getting his daily green chile fix while road-tripping to Washington state to visit his in-laws, but he's optimistic that he can figure it out, even if it means opening the bottle of green chile wine he picked up in New Mexico — something he's not super-excited to try. "It's a 'Break in case of emergency' thing," he says.

Assuming he makes it through that trip and continues to eat green chile every day through December 31, will he take a break? "Maybe I'll take a week or two off, but I don't know if I really want to," Dozier concludes.
KEEP WESTWORD FREE... Since we started Westword, it has been defined as the free, independent voice of Denver, and we'd like to keep it that way. With local media under siege, it's more important than ever for us to rally support behind funding our local journalism. You can help by participating in our "I Support" program, allowing us to keep offering readers access to our incisive coverage of local news, food and culture with no paywalls.
Make a one-time donation today for as little as $1.