Windfall Brewing will have at least four beers and a seltzer when it opens. Windfall Brewing
Windfall Brewing will make its full-tilt entrance to Colorado's beer scene on December 13, when the new brewery and restaurant opens its doors with housemade craft beer, a scratch kitchen and vintage pinball in the former Rock Bottom Restaurant & Brewery at 14694 Orchard Parkway in Westminster.

There will be at least four beers on tap and one seltzer to start with, including Puppies, an easy-drinking ale made with Pilsner malt, German hops and English ale yeast; Neapolitan Stout; and Brave Noise, a national collaborative pale ale that is meant to increase awareness about sexual assault in the brewing industry.

Windfall is owned by Abby Jeffers and Shawn Murray, who began working on the concept in 2018, shortly after Broomfield's Nighthawk Brewing, where Murray was the general manager, closed. Murray helped create an arcade-like atmosphere there, as well, but that idea will be expanded upon at Windfall with numerous games, including vintage ones like Pong and Double Up. There is even a Clawmaster.

Murray says that the brewery has "been a long time coming, and we are pretty proud of ourselves." 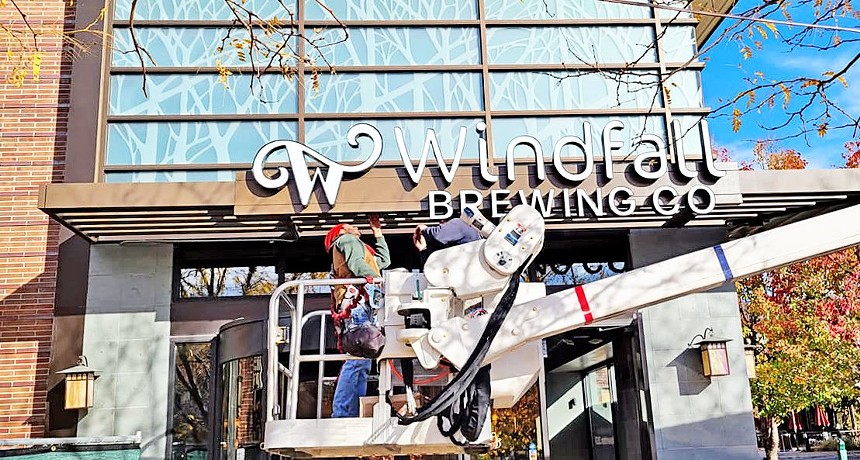 The sign is installed at Windfall Brewing.
Windfall Brewing
The old Rock Bottom space became available in 2020 after the chain's former parent company, Craftworks Holdings, filed for bankruptcy protection in March and closed several of its Rock Bottom and Old Chicago locations across the country, including the one in Westminster. A few weeks later, pandemic restrictions set in nationwide, worsening the company's situation; Craftworks then laid off all 18,000 employees. Craftworks sold to another investor later that year and reopened many locations.

Windfall joins several other breweries in the busy corridor between I-25 and Highway 36, just north of Denver. Some of the beer makers in that space include: Satire Brewing and Mother Tucker Brewing, both in Thornton; Frolic Brewing, Westminster Brewing and Kokopelli Brewing in Westminster; and Wonderland Brewing, 4 Noses Brewing and Rails End Brewing, which are in Broomfield.

Windfall will be run by two co-head brewers, one of whom is JulieAnne Diehl, who has been a brewer and bartender at Platt Park Brewing and Copper Kettle Brewing.

The kitchen will be helmed by Kashia Tracey, who has been a chef at the Post Chicken & Beer and Centro Mexican Kitchen, and done stints at Zolo and Elway's Steakhouse at DIA. She plans to incorporate
Windfall's beers into some of the dishes and sauces on her "American pub-style" menu.
KEEP WESTWORD FREE... Since we started Westword, it has been defined as the free, independent voice of Denver, and we'd like to keep it that way. With local media under siege, it's more important than ever for us to rally support behind funding our local journalism. You can help by participating in our "I Support" program, allowing us to keep offering readers access to our incisive coverage of local news, food and culture with no paywalls.
Make a one-time donation today for as little as $1.