Straight-up Buffalo wings are the way to go at Woody's. Maureen Witten
Football season is long gone, but that doesn’t mean you have to stifle the inner voice that occasionally screams out for some crunchy, spicy, sauced-up Buffalo wings. Woody’s Wings (313 Havana Street) is a tiny red and white hut standing solo between an empty field of weeds and an old gas station, where you can go to fulfill that incessant hankering, even well past the hoopla of Super Bowl Sunday.

Since there’s not even a left-hand turn lane off of Havana to get into the restaurant’s microscopic parking lot, it’s almost as if Woody’s was there by accident. The tiny lot and even smaller dining room make this an atmosphere conducive mainly to takeout orders. When you walk into the bare-bones establishment, you’re immediately cautioned that wings take twenty minutes to cook, since they’re made to order. So if you're getting an order to go, it’s a smart move to call ahead to avoid awkwardly waiting in the small dining space, especially if it’s crowded, since there’s hardly anywhere to stand without hovering over someone's table. 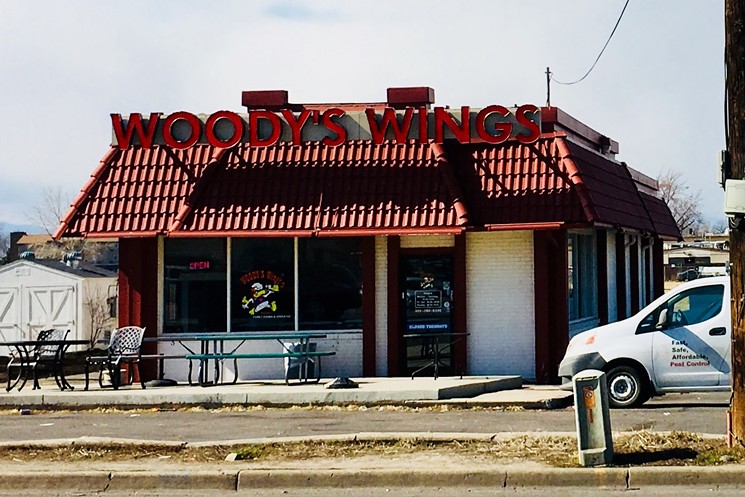 Woody's is the place for wings on Havana Street.
Maureen Witten
As promised, our wings arrived after about twenty minutes of waiting; our patience was rewarded with baskets of warm, golden-brown wings that smelled delectable. These wings aren't breaded, and the thin, blistered skin crackled between my teeth wiith each bite, rendering a satisfying crunch that only a properly fried wing can. These wings are only average-sized, which was fine, since I don’t love the idea of consuming heavily hormone-injected, Arnold Schwarzenegger-type meat of any kind. The meat itself was supple but not incredibly juicy (though neither dried out nor too oily), pulling off the bone easily.

Any good wing establishment understands that Buffalo sauce is just as much an integral part of the dish as the wings themselves, which is why Woody’s offers the tangy, buttery concoction in mild, medium, hot, x-hot and "nuclear," letting customers enjoy traditional-style wings whether or not they choose to burn their faces off. I erred on the side of caution and went for the medium, which had a zesty zing with a thick, buttery viscosity close to that of ranch dressing. I appreciated that the texture of the sauce was thicker, because it didn't end up pooled at the bottom of the paper serving basket.

The fried okra may not be hand-breaded, but they're good.
Maureen Witten
I also sampled five of the eleven non-Buffalo sauces (available for 89 cents per additional cup) to see how they measured up. While the variety was there, the honey sriracha, Spicyaki, zesty ranch, garlic Parmesan and honey barbecue simply tasted like a blend of two or more of the other sauces mixed together, or with different spice powders mixed in. The garlic Parmesan, for example, tasted like a mix of mild Buffalo sauce with garlic powder and ranch, though the shreds of real Parmesan were a bonus and added to the the texture of the creamy sauce. The honey barbecue stood out with notes of molasses, honey and heavy liquid smoke, but the Spicyaki seemed like a mix of teriyaki sauce and honey barbecue with a few red-pepper flakes. The honey sriracha was the least impressive (and also the most expensive at 99 cents per cup); it was vinegary, overpoweringly sweet and too thin to cling to the wings.

Those sauces tend to add up.
Maureen Witten
Wing orders come with fries, but I subbed in an order of fried okra for $4.99. My Oklahoma-born dining companion didn't care for them, noting that they didn't taste homemade, but I'm a Colorado native who didn't grow up with fried okra, so to me they were a scrumptious deep-fried vegetable. In fact, Woody’s does all of its fried foods well. Wing eaters in general are probably not overly concerned with finding hand-breaded, housemade fried foods; at a wing hut like Woody’s, crunchy fried fare that goes well with saucy hand-held poultry and cold beer is enough — so okra is a bonus, especially when you've got your eyes glued on the big game and you're fixated on what’s really important. Woody's macaroni and cheese wedges ($6.99) do the trick in these circumstances, too — second only to the wings. These three-cornered delicacies sport a blissfully crisp exterior with luscious cheesy noodles (even if distinctly blue-box in appearance). I had ordered these for my son but later found myself binge-eating his leftover wedges that night — cold, out of the refrigerator, without even registering what I was doing until they were gone. (I’m still working on an alibi for when he discovers they've vanished.)

Woody’s is a little pricier than most takeout joints in the area, with fried sides (from mushrooms to jalapeño poppers to mini corn dogs) running $7 to $13, and lunch meal deals in the $9 to $15 range (and even more if you sub out the fries, like I did). All those sides of sauces add up, too, as do extras of celery and carrots, which cost 80 cents for a small order (half of a sandwich baggie) and  $1.25 for a full sandwich bag. After all the nickel-and-diming (or if you’re a straight-up baller), you might still consider springing for the Buffalo chicken cheese dip and chips appetizer for $6.99 while you wait out the twenty minutes that your wings are cooking. Beers are reasonably priced (starting at $4), although sticking around on any important game day doesn't seem like the best way to enjoy a Woody's order; the tight quarters, counter service and single unisex bathroom would make the place annoyingly crowded, but the four big TVs (one in each corner) are certainly geared toward sports fans.

Ultimately, Woody's isn't there for those looking for home-style food or a fine-dining experience. When the game is on the line, hot wings, fried finger food, cold beer and a view of the screen are the most important things. Woody’s fills the bill on that criteria alone.