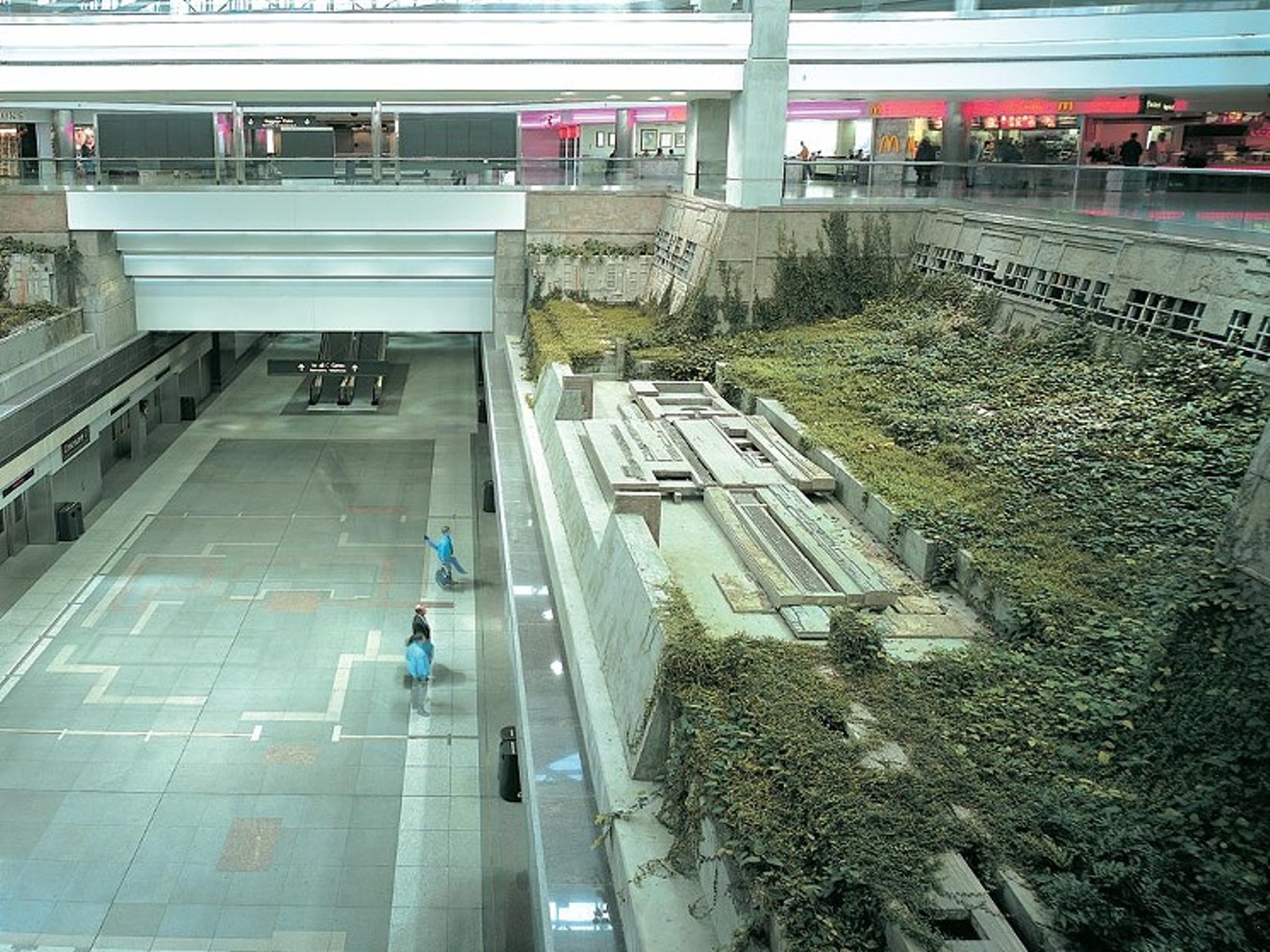 Interior Garden in greener, and less crowded, times. courtesy michaelsinger.com
This story has been updated to include new comments from artist Michael Singer.

At the April 4 meeting of the Denver Commission on Cultural Affairs, Denver International Airport officials presented a request to deaccession three of the airport's original public-art pieces, part of a $15 million-plus art collection made possible by Denver’s policy that sets aside 1 percent of every major construction budget for art — a collection that earned DIA the title "Best U.S. Airport for Art" from USA Today four years ago.

The pieces included "SkyDance," by the late Anna Valentina Murch, which was supposed to throw shadows on the ceiling of the terminal but never really worked. The second, the terminal floor designed by Jaune Quick-to-See Smith and Ken Iwamasa, had been expanded from the original of two decades ago to add a section in the center, a replacement for “Mountain Mirage,” the fountain that was supposed to create a silhouette of the mountains but instead created a mess on the floor of the train platform. “Mountain Mirage” was the first — and up until now, only — piece to be deaccessioned at the airport. Removing the floor “will ensure DEN is able to meet today’s security and passenger flow needs and accommodate the future growth of airlines and passengers,” the deaccessioning request noted, referring to the major remodeling project at the terminal that is slated to get under way this fall. 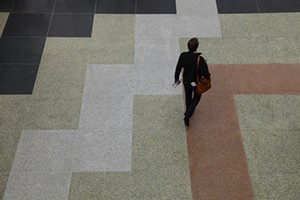 The floor of the Great Hall at Denver International Airport.
flydenver.com
The third piece was far from the terminal project, but visions for the airport's future growth definitely played a part in the request to deaccession Interior Garden, by Michael Singer, the enormous, haunting ruin in the center of the C Concourse.

At their May 2 meeting, commissioners discussed the deaccessioning request, agreeing that "SkyDance" could go, agreeing more grudgingly to removing the terminal floor, and definitely disagreeing with the request to deaccession Interior Garden. Creator Singer also disagreed, saying he was willing to work with the airport on repair that would cut the expensive maintenance cited as one reason for the deaccession request.

"I know there are some maintenance challenges," he said after that meeting, "and I am certain they can be resolved with a collaborative effort. I had no idea that there was a plan for deaccession until I received a formal letter from the airport informing me of the request and the process…. I wrote several letters to the Commission on Cultural Affairs expressing my belief that there are many ways of addressing the airport’s issues while keeping and enhancing the garden. I was very pleased to hear the commission voted fifteen to three to decline the request for deaccession. Garden is a very special piece, and it’s reassuring to know that the commission values this piece as much as I do."

But the ultimate decision fell to Kent Rice, executive director of Denver Art & Venues, who shared the decision he'd just sent to Kim Day, CEO of the airport, at the July 11 meeting of the Denver Commission on Cultural Affairs. Here it is:

I have made the following decision on the request to deaccess the Interior Garden by Michael Singer.
This deaccession request is approved on a contingent basis, with the following 11 stipulations:

1. A new piece of public art will be commissioned by Michael Singer.

2. This piece will be installed in the general vicinity of the Mezzanine level of Concourse C, so very proximate to and above the current installation.

3. To the extent feasible, it will utilize pieces of the current installation.

4. In any event, it must reflect the original intent and spirit of the Interior Garden.

5. Michael Singer and his studio colleagues will collaborate with DEN executives on a specific site in the Mezzanine where the new installation will be built.

6. DEN will fund this new installation with up to $495K of the $1.0M it has committed to new public art at the airport.

7. These funds, the $1.0M, are not part of any other 1% for public art account, though they may be combined with other projects, in consultation with this Commission.

8. The initial meeting between Michael Singer and DEN must occur within 90 days of today, to ensure that this site selection and new commissioning process begin in a timely manner.

9. The Commission will receive, at a minimum, quarterly updates on the progress of this collaboration.

10. Once the site and design have been agreed to by the artist and approved by the Commission, this deaccession will be officially approved.

11. Finally, DEN has committed to developing and approving—within 24 months—an official Art Master Plan for the airport. This Plan will be created in concert with two members of the Commission and a member of the public art staff of Denver Arts & Venues. This Plan will serve as a roadmap on the longer term plans for the airport and inform how public art is integrated into what is clearly a dynamic public space and a major City enterprise.


For fans of Interior Garden, this might not seem good news. But Singer, at least, is optimistic: "I am pleased with this outcome as it gives me the opportunity to work with the airport and the Denver Arts & Venues public art team to explore options in the modification, relocation (part or full), and/or re-creation of the Garden within Concourse C," he says.

"I'm grateful and honored to be given this opportunity to work with everyone to make the Garden thrive again as it once did, whether in some modification of its current form or in a completely new way that honors the spirit and intent of the original Garden. I look forward to the forthcoming design process for this new work, but I truly don't feel the Garden is lost; rather, I believe there will be a new incarnation of the Garden. I know it will be beautiful and I am excited about its possibilities."

And there's a consolation prize in the eleventh stipulation, too:  It's high time for the airport to release an official master plan for the art collection, so that the commission — not to mention the public — is not surprised by another request to get rid of "public" art.

And if there's room for a twelfth, how about this: It's high time that oversight of the city's entire public-art collection, including the work at the airport, be consolidated under Denver Arts & Venues, which should be accountable for all the pieces; that way, concerns about the condition of a work might not come as such a surprise.