The view of Meow Wolf Denver from Auraria Parkway. Shears Adkins Rockmore Architects
Meow Wolf is about to make a purrfect landing in Denver. In one of the worst-kept secrets in town, at 10 a.m. today, January 4, the ten-year-old Santa Fe arts collective and its new partners will announce where they'll build Meow Wolf's first permanent exhibition in a major market. And it's a major project, too: a $50 million, four-story (plus mezzanine), 90,000-square-foot building that will hold 60,000 square feet of exhibitions, three times the size of Meow Wolf's House of Eternal Return in Santa Fe, along with a restaurant, bar and retail and support spaces.

For the past year, Meow Wolf has explored various spots around Denver — the Sports Castle, the old Denver Post plant off I-70. And the winner? A spot right in the gritty heart of Denver, a triangular space created by the Auraria Parkway and the viaducts of Colfax Avenue and Interstate 25, just across the river from Sports Authority Field and close to the Pepsi Center and Elitch Gardens...which is significant, because Meow Wolf's Denver development partner is Revesco Properties, a real estate and management company that's an owner and managing partner in Elitch Gardens. In fact, the Meow Wolf team will work out of Elitch's HR office before that building is demolished and Meow Wolf Denver constructed. Groundbreaking is slated for this spring; Meow Wolf Denver's target opening is early 2020. 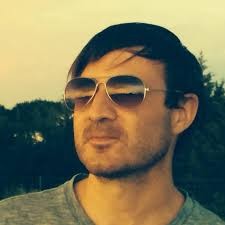 Vince Kadlubek has vision.
Twitter
Meow Wolf Denver is quite an accomplishment for a group that got its start in Santa Fe ten years ago as so many arts efforts do, with big ideas and little money. Did co-founder Vince Kadlubek ever think Meow Wolf would get this far? "It was the type of dreaming that 'One day, I'm going to be a rock star.' Yeah, there's a sliver of possibility...but the truth was, we were restaurant workers pulling in $50 a night and trying to pay rent and then working on Meow Wolf at night. It felt like a total impossibility for it to ever be a successful business.

"We knew we could create great things, but it would take money," he continues. And as any arts group knows, money can be hard to find.

Then three years ago, Kadlubek floated an idea for a groundbreaking exhibit, an immersive experience, past a former boss at a Santa Fe movie theater: George RR Martin, creator of Game of Thrones. "I knew George. He actually fired me," he recalls. "It was kind of a long shot; I did not expect him to get back to me."

But Martin not only got back to him, he bought the old Silva Lanes bowling alley in a $2.7 million deal that allowed Meow Wolf to create the House of Eternal Return. "We still didn't have money, but we had a lease," Kadlubek says. "This was real. This was really real."

The view of Meow Wolf Denver from Auraria Parkway.
Shears Adkins Rockmore Architects
So real that in March 2016 the group opened the 20,000-square-foot House of Eternal Return, and it became an immediate hit...not just in Santa Fe, but around the globe. People were enchanted by the overwhelming, immersive experience that took them through a maze of creativity and possibilities, all created by local artists. "It was kind of this uncanny valley between people who saw what we did as really interesting and engaging artwork, and then bridging that to a successful business," Kadlubek recalls.

"By July of 2016," he continues, "we saw the sort of magnitude, the lines out the door, the five-star reviews, the articles in international publications, and that's when we said, 'This is more than Santa Fe; other cities could have this.' And that's what we hope to spark."


As the Meow Wolf team began looking at other cities, Denver was a natural, since the artists had spent plenty of time in the Mile High City and knew many people in the arts scene, including the founders of Rhinoceropolis, which had just been closed in the wake of the Ghost Ship fire. If Meow Wolf already had a high profile with House of Eternal Return, that profile only grew as the group started a DIY fund to help community art spaces threatened with closure with rent and infrastructure improvements. Over the past year, the fund has given $215,000 to over a hundred groups across the country, including Rhinoceropolis and Glob. Meow Wolf was also tapped to distribute City of Denver funds to local DIY groups.

Last January, the Meow Wolf crew started talking in earnest not just with developers, but with local artists, starting with a meeting at Forest Room 5. It was a tough time for members of Denver's DIY arts scene, already threatened by rising rents; the crackdown after Ghost Ship only heightened artists' concerns. But Kadlubek says they never treated the Meow Wolf team as interlopers...and Denver groups such as Itchy-O traveled to Santa Fe to perform at House of Eternal Return (see video above). "The creative communities have been welcoming, the art institutions have been welcoming," he adds. "Denver doesn't have the insular, protective territorialism.... Denver's pushing things, with an influx of young people, new money, new ways to do business." 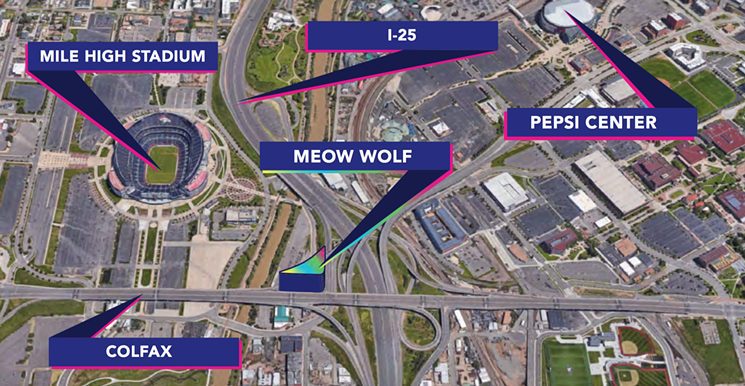 Art in the heart of the city.
Meow Wolf
And while "developer" can be a dirty word in this town, the Meow Wolf team was impressed with what they found here. "There's a sense of 21st-century development here in Denver that feels almost like the most progressive that we have in the country," Kadlubek says. "There are really interesting, hard-to-describe multi-use developments here." And what's old is new again: Meow Wolf got a lot of early support from Dana Crawford, the power behind Larimer Square and then, fifty years later, the renovation of Union Station. Although Crawford's candidate was not chosen for Meow Wolf Denver's location, she'll be a consultant on the project, and is already talking to the group about how to take advantage of the admittedly challenging site. (If you've ever been to Mile High Station, where today's announcement will be, you know how to get there. If not...)

"It's so funky," Kadlubek admits. "It's confusing to get to, and getting to it will almost be part of the experience."

Almost. But once you're inside, you'll be in a different world. From Denver, and from House of Eternal Return, too. "If Santa Fe's House brought you into one family's life, the Denver experience is going to take you into an entire world.... That's how we're distinguishing the two," Kadlubek says.

That's about as much detail on the concept as Meow Wolf will be revealing for now; more will be revealed in the second quarter of 2018, when fundraising will also begin in earnest. But plans are already solid enough that 2020 tickets will be available today at meowwolf.com, and the partners are already anticipating hiring between 150 and 300 local artists and craftspeople. "We're going to spend the money well, on the most awesome creatives," Kadlubek promises. "We're getting ready to move." The twenty-year lease is already signed, and the project is moving forward through the city's permitting and planning processes. 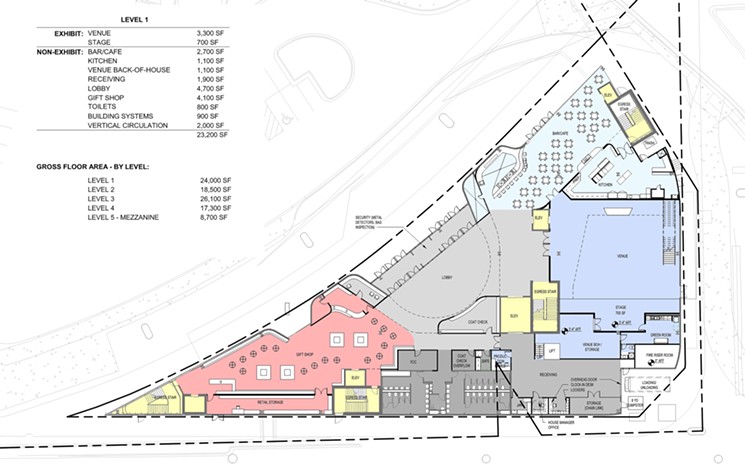 Plans for Meow Wolf Denver.
Meow Wolf
Meow Wolf isn't stopping in Denver, though. The group is still talking to Austin and Las Vegas, runners-up in the race to host the first major expansion, and it's also looking at possibilities in Washington, D.C., Phoenix and Minneapolis. But Meow Wolf is willing to share the immersive market. "We don't have to do all of them," says Kadlubek. "It would feel like McDonald's. We want to feel like we're helping with the instigation of an entirely new industry centered around creativity."

There are challenges ahead, of course. Raising the money is no guarantee; arts groups in Denver are already struggling to come up with the cash for their own projects, and may not take kindly to a Santa Fe outfit dipping into that same pot, even if it is hiring local artists. And Meow Wolf will have to grow, and quickly, to handle everything on its plate. "We have created project management systems," Kadlubek says. "Our culture exists in every conversation that we have with each other...our culture will stay alive. It's about respect, love, listening, supporting."

Still, many great arts efforts have started across the country in the past decade and gone nowhere. Why did Meow Wolf take off?  "I think we gave people an experience that gave customers a type of freedom to explore and be curious and discover in a way no other consumer experience has ever done," Kadlubek concludes. "And it really just comes out of trusting and respecting people and believing that they're not going to vandalize, they don't need to be controlled, they don't need to go along a certain path, they don't need maps and guides, they don't need their hands held.... A lot of the art world has not given credit to the general population, that they need dumb art or Star Wars. Actually, the general population wants to go see weird and creative stuff."