Artists moving out of Rhinoceropolis on December 9. Lindsey Bartlett
At the end of 2016, the DIY dilemma was Denver's hottest arts topic. In the wake of the Ghost Ship fire, at least two Denver DIY spaces — Rhinoceropolis and Glob — received unexpected visits from the Denver Fire Department and were closed for safety issues; neither have reopened, though plans are still in the works for Rhinoceropolis to make a comeback. Artists met to talk about how they're being priced out of a city that bills itself as a creative mecca; city officials met with artists to figure out how the city's codes could accommodate DIY spaces while still keeping people safe. (The Denver Department of Community Planning and Development plans to announce a new building-code approach next month.)

And through it all, Meow Wolf roared.

Meow Wolf is the unlikely success story of the DIY world. A Santa Fe collective that had formed a decade ago got an incredible boost when George RR Martin pledged $2.7 million to the purchase of an old bowling alley in Santa Fe that the group turned into Meow Wolf, a 20,000-square-foot art installation that's a riot of color and creativity. It's also a big tourism attraction in Santa Fe, and an inspiration for developers in other cities who want to connect to the arts.

In fact, several local developers are hoping to lure Meow Wolf to Denver, and the group is certainly interested in building on what it's created in Santa Fe, this time with an installation five times the size of the original, one that would employ hundreds of local artists. The Meow Wolf crew has been in the Mile High City several times this year, meeting with developers, potential landlords and artists alike. (Meow Wolf has been courted by Las Vegas, and is considering Austin, too.)

Meow Wolf founder Vince Kadlubek has also been pushing art on the national stage; earlier this month, he was in Breckenridge to speak at the Downtown Colorado Inc. and Colorado Creative Industries annual conventions. 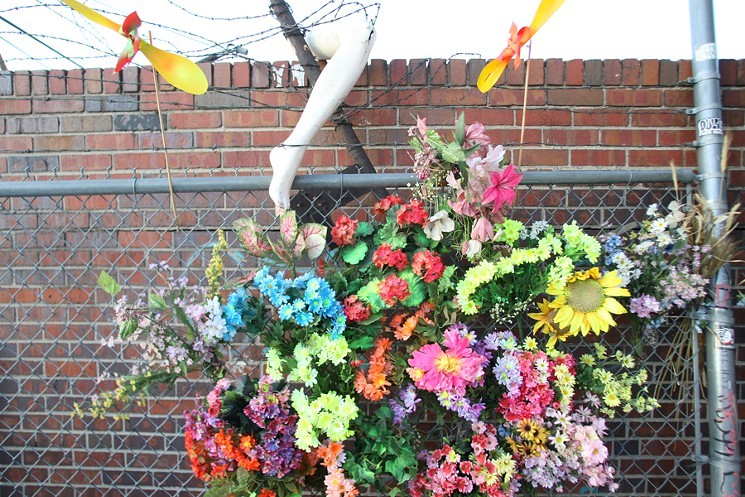 A shrine to Denver's DIY scene outside Rhinoceropolis.
Ken Hamblin III
But his more important Colorado role has been coordinating $20,000 in grants that Denver promised to make available to this city's DIY ventures. Although some wondered why no Denver organization was deemed capable of handing out the grants, Denver Arts & Venues pointed to the fact that right after the Oakland tragedy, Meow Wolf had set up a $100,000 fund for DIY grants for groups across the country, so it already had the mechanisms in place. (Meow Wolf had also donated $20,000 directly to Rhinoceropolis and Glob.)

And so Denver asked Meow Wolf to earmark an additional $20,000 for Denver-based art venues. For these grants, Meow Wolf followed the criteria laid out by Arts & Venues; Denver artists and organizations could also apply for grants through the $100,000 Meow Wolf pool.

And the plan paid off. Meow Wolf has chosen the recipients of the grants, and a total of $54,000 will be coming to nineteen Denver groups: $20,000 through the Denver-funded grants, and another $34,000 from the Meow Wolf fund. (Kadlubek says Meow Wolf received a total of 24 applications from Denver; the five that weren't funded were more ideas than concrete organizations.)

The grants run from a few hundred dollars up to $10,000, and they're going to a wide range of organizations, from performance troupes to resource centers to arts venues large and small. "The ones we're funding at the larger level have done consistent work; we wanted to honor that," Kadlubek says. "A couple are on the newer side; we thought we could help them get off the ground a little bit." 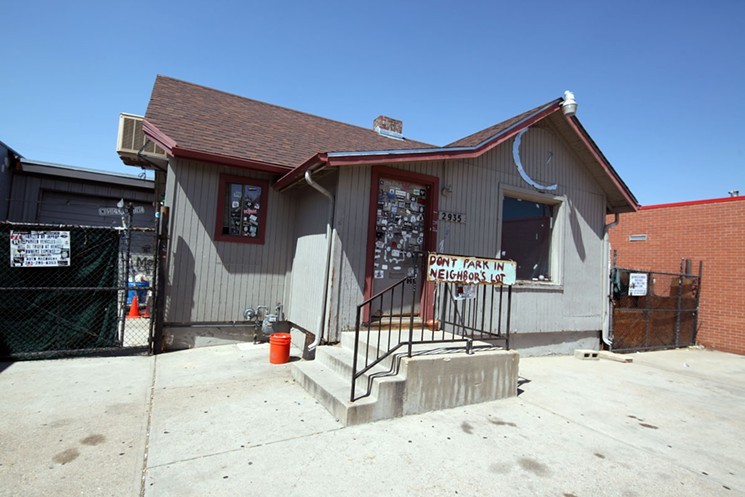 Seventh Circle just got a DIY grant from Denver.
Anthony Camera
"At this point, we'll just be saving most of it to have on hand for the future," says Aaron Saye of Seventh Circle, a respected DIY music venue in town. "We currently have no specific plans regarding what to use it for, other than some small repairs to the sound system and the building itself that have recently become necessary. We're incredibly grateful to Meow Wolf and Denver Arts & Venues for selecting us as a recipient, and truly humbled by their generosity. We're very proud and honored that they considered us to be deserving of this grant."

The grant money from both Denver's fund and the Meow Wolf pool will be sent "within the next week," Kadlubek says. "Some applications were more urgent than others." (He doesn't even know how urgent; some recipients are in precarious positions with landlords and may have to use the money to find new homes.)

"There are some established organizations that have been doing really good work and are supporting a creative class, a creative landscape in Denver, and the funding does come at a pretty good time," Kadlubek adds.

And will Meow Wolf become part of Denver's creative landscape? "We continue to do groundwork there," Kadlubek says. "We're getting to know more of the community; there are two or three new properties that we are continuing to look at. I would like to announce something this summer."