Combining Dispensary, Pot Grow and Brewery Tours Into One 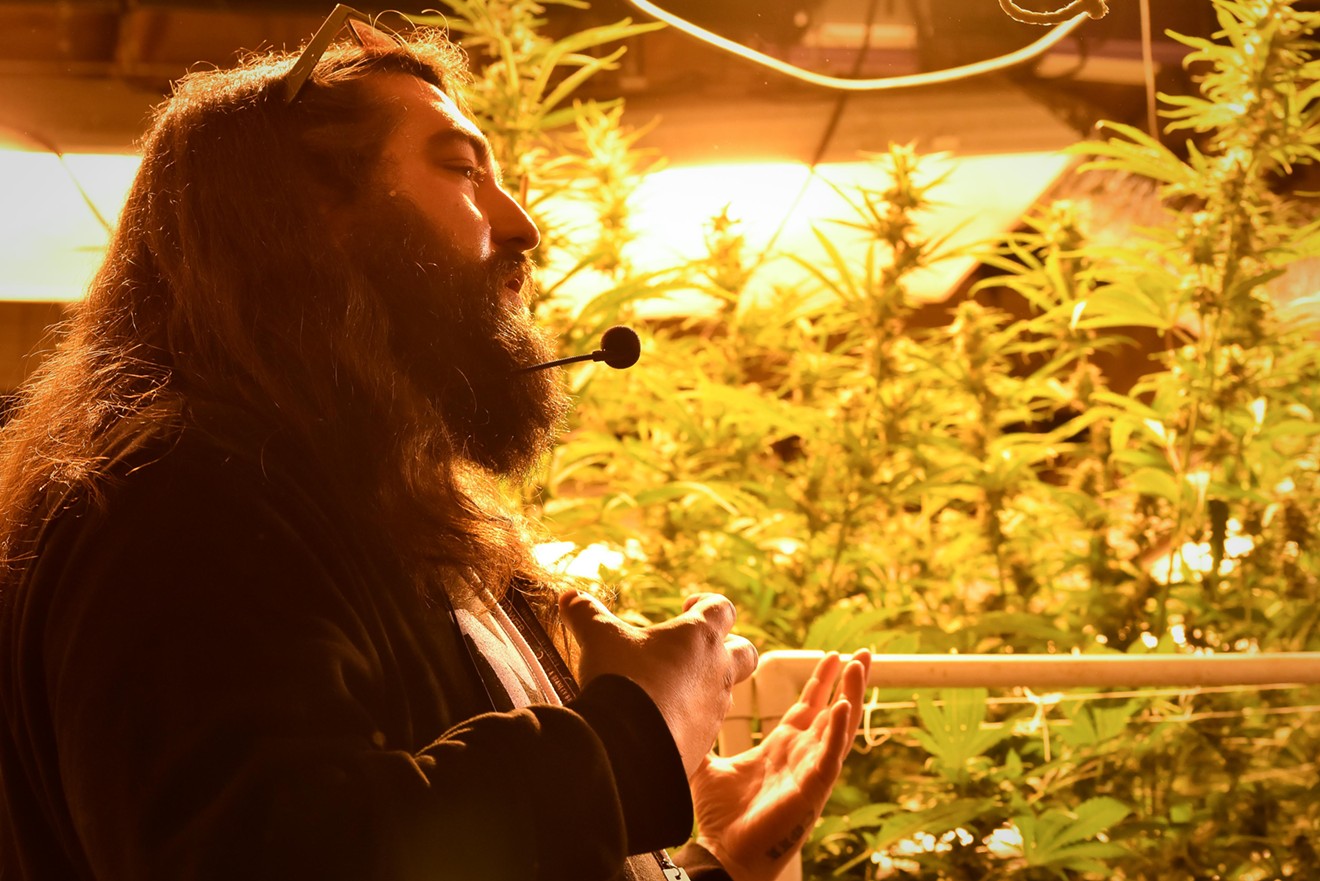 Gage Dunn, one of our Budz and Sudz tour guides, explains the intricacies of a commercial pot grow. Madeline St. Amour
My 420 Tours is a state leader in the cannabis tourism industry, attracting more than 1,000 visitors each month. When I visited its base of operations, nestled in a renovated loading dock just south of Elyria-Swansea, the only signs that it was a cannabis company were a pop-up display for an edibles brand and some CBD-infused cold-brew coffee — but I was only there for what was to come.

The company is known for pot-centric tours and classes ranging from infused cooking to sushi- and joint-rolling, but I signed in for the Budz and Sudz tour. The Budz and Sudz journey is one of the company’s most popular offerings, taking people to a cannabis cultivation facility, dispensaries and a brewery via a large party van every Thursday and Friday afternoon. One more thing: The party van is hotboxed with pot smoke virtually the entire time.

Danny Schaefer, CEO of Pioneer Industries, which owns My 420 Tours, says the trip brings out the “connoisseur” in people, enabling them to sample and buy two of the state’s most popular products on one trip. Cannabis and beer flavors also go together well, he says, as the hop plant is a sister to cannabis.

Our first stop was a 15,000-square-foot pot-cultivation facility in the same brick building that houses My 420 Tours. The facility, which supplies LaConte’s dispensaries, is designed like a warehouse, with a long row of doors that slide up on either side of a concrete hallway. Our tour guide, Gage Dunn, who has long black hair and a matching curly beard, led the way into the cultivating facility after giving a brief warning about the 100 or so cameras inside. 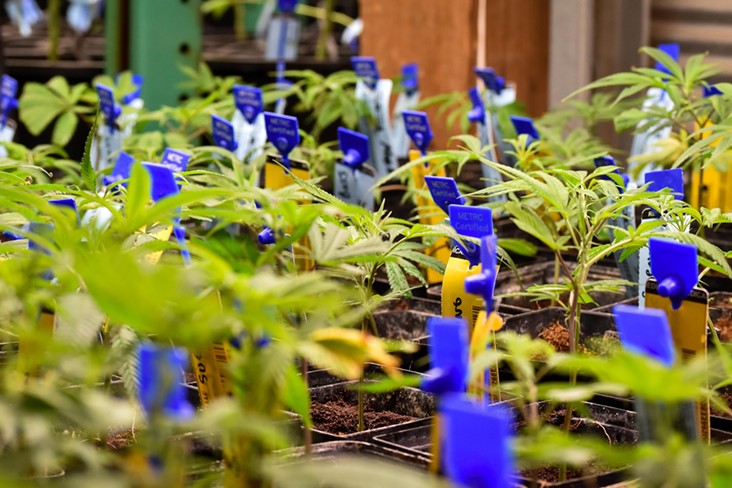 Cannabis plants in their vegetative state.
Madeline St. Amour
Dunn moved quickly through the different phases of the growing cycle, from vegetation to blooming, going through all of the information within forty minutes. Most of the doors revealed rows of plants flooded in bright lights, which keeps them in a vegetative state, Dunn explained, so that they don’t bloom prematurely.

While the smell of marijuana was hidden outside the facility and largely insignificant in the concrete hallway, the skunky odor hit our noses as soon as a sliding door farther down the hall opened and a more mature version of the plant became visible. The final room was empty, except for lines of string running from wall to wall and bins full of two different strains of pot.

The plants get hung up and dried in this room for the “curing” stage before they’re husked and hand-trimmed, with the best pieces picked out for the dispensary. The whole process takes about five to six months. The unused pieces of weed that aren’t extracted for concentrates are soaked in bleach to deter those who still go dumpster diving to score free, crappy marijuana, Dunn said.

The grow tour was hardly a petting zoo: We were kept in the hallways and away from the plants for most of it. We could look, maybe step a few feet into the grow room — but we definitely could not touch. 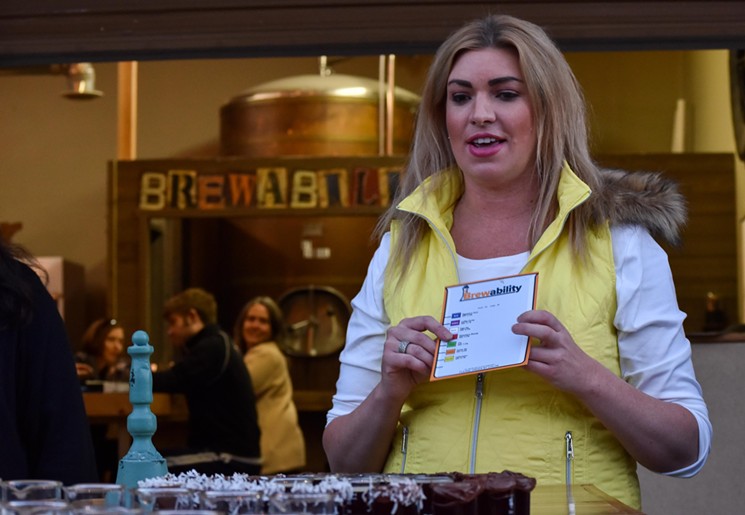 Brewability Lab founder Tiffany Fixter explains the available beers.
Madeline St. Amour
Our next stop was the Brewability Lab, a brewery off I-70 and Peoria Avenue that was much smaller than the grow. Our bartender led us into the back room, where the brewery equipment is stored, for a tour of the facility. The tour ended with a sample of Brewability’s coffee porter, rimmed with Nutella spread and coconut. Yes, it was as delicious as it sounds.

Our group of 23 people had to split in two for the tour because of the tight space, allowing us to get up close and personal with the machines, unlike at the growing facility. The Brewability Lab brews five beers manually, and fermentation takes two to four weeks — much less time than it takes to cultivate and cure pot. We also smelled some of the brewery’s hops, which were just as pungent as the harvested cannabis buds we'd just smelled back at the growing facility, with scents of citrus, pine and soil filling our nostrils.

The bar was nearly packed when we arrived Friday evening, and its open plan, wood features and photo-filled wall gave it a homey feel. It was a nice break from the cloud of pot smoke that permeated the party van, and a reminder of how drinking is still the simpler option. We all sampled at least one beer, and some bought more to enjoy there, unrestricted by consumption laws. 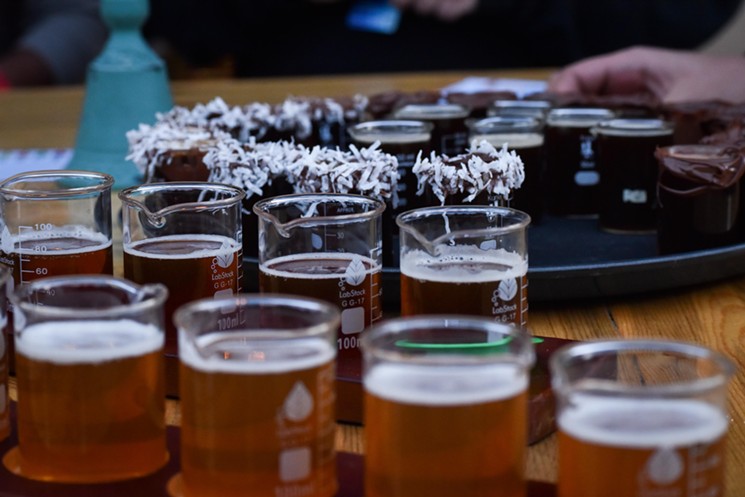 Brewability's IPA and coffee porter, rimmed with sweets.
Madeline St. Amour
At dispensaries, of course, consumption still isn’t allowed by state law. The first pot shop we visited, The Green Solution, put my one prior experience at a dispensary to shame. It had everything from artisan chocolates to seeds for home grows, all displayed behind glass on white shelves and offered up by friendly employees wearing black – a stark aesthetic departure from the brewery. “Think of Starbucks and Apple having a baby,” Dunn said to preface our visit, “and then it grew up to sell weed.”

The second dispensary we visited, LaConte’s, is housed in an old pharmacy that once brewed beer in its cellar during prohibition, according to our tour guides. Now it’s a dispensary selling flower cultivated from the growing facility we had just visited. The mom-and-pop atmosphere was less intimidating than that of the Green Solution, but it also wasn’t as easy to view all of their products, and the lines moved much slower.

Perhaps the most important part of the tour, though, was the bus. Because it’s privately operated and closed off to anyone under 21, it’s legal to smoke pot or drink alcohol on it while it’s running, which is a huge attraction for out-of-staters trying to find a way to legally experience Colorado’s weed industry.

About 90 percent of the people who go on ganja journeys with My 420 Tours are from out of state, according to marketing director Cynthia Ord. Of those tourists, about 5 percent are traveling internationally, while most are from Florida, Texas or California. However, now that California allows recreational pot sales, those travelers may just stay home for their weed-related field trips.

A Texas man lights up on the My 420 Tours party bus.
Madeline St. Amour
Looking around the bus, it was clear that all types of people wanted in on this experience. There were blonde hipsters from Kansas City, a shaggy-haired guy from Oregon and a couple from Texas here primarily for snowboarding (he smokes regularly, but she never had).

Other than the pot itself, My 420 Tours provides the startup equipment: rolling papers, lighters, a bowl, bottles of water and chips. Almost immediately, my view of our tour guides was clouded by a gray haze as visitors took advantage of one of the few places they could legally light up in the state. Each time we got back on the bus, green lights would start bouncing from one end to the other, music would start blasting, and someone would start lighting up. We passed around bowls and joints until nearly everyone had glazed eyes as the ride became more and more relaxing.

On the way back from LaConte’s, my neighbors on the bus talked about dinner and looked at the lights and buildings of Denver, passing around another joint. Schaefer hopes to use My 420 Tours’ success to expand beyond Denver, empowering other tour companies that want to enhance their offerings with cannabis. Fly-fishing, spiritual wellness, wine tours – they can all be better with a little pot, according to him.

Based on my firsthand experience, I know brewery tours and bus rides sure can be.