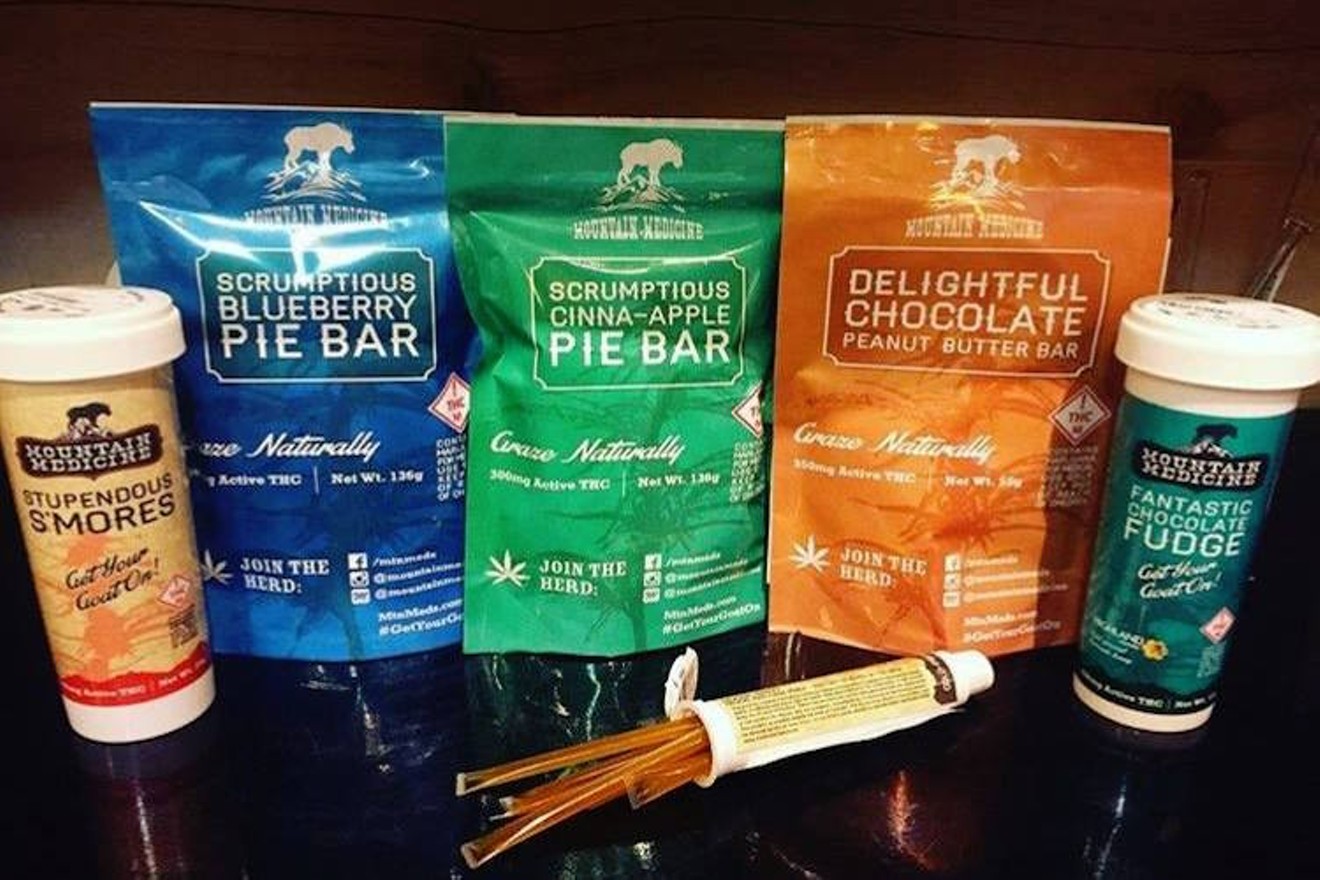 The City of Denver recently announced that nearly 1,000 cinnamon-apple pie, blueberry pie and peanut butter bars (center) from Mountain Medicine must be recalled because of potentially harmful marijuana. Mountain Medicine Facebook Page
A Denver-based medical marijuana edibles manufacturer has recalled nearly 1,000 products from dispensary shelves because of potentially harmful marijuana, according to an announcement from the Denver Department of Environmental Health.

Approximately 980 Mountain Medicine products are subject to a recall because they were made with marijuana flower from Good Meds, a Denver wholesale marijuana cultivator. Good Meds voluntarily recalled its marijuana flower, concentrates and edibles earlier this month after city inspectors found "a lack of effective controls in place to prevent and detect pesticide contamination, and the presence of potentially unsafe pesticide residues."

The pesticides in question contained fungicides tebuconazole and myclobutanil, according to the Department of Environmental Health.

"Samples of marijuana and marijuana concentrates evaluated in the course of a Denver Department of Environmental Health (DEH) investigation at Good Meds contained residual levels of off-label pesticides that the Colorado Department of Agriculture has determined cannot be used legally on marijuana in Colorado," the recall announcement reads.

Recalled Mountain Medicine products include its blueberry pie, cinnamon-apple pie and peanut butter bars made on February 20, February 23 and March 15 of this year, and were distributed both inside and outside of Denver, according to Danica Lee, director of the Denver Public Health Inspections Division.

The city encourages anyone who purchased these products to return them to the store from which they were purchased or dispose of them immediately.

Recalled products
Denver Department of Environmental Health
In a statement sent to Westword, Mountain Medicine says its products passed testing but were recalled because of a labeling issue.

"A limited number of products identified by the Department of Environmental Health are being recalled due to an isolated labeling issue. These products passed pesticide testing. We remain committed to providing cannabis products of the highest quality, consistency, and flavor to patients and consumers in Colorado," the statement reads.

Mountain Medicine was founded in 2009 and is sold in dozens of dispensaries around the state. You can find out which dispensaries carry its products on its website.

There have been no reports of illness from the products, according to the city, with the health impact of certain marijuana pesticide residues still unknown.