Sketch by Karen Seed
“The question is not whether you agree with the politics here,” Judge Kerri Lombardi told a room full of potential jurors on Tuesday, April 4, at the Lindsey-Flanigan Courthouse.

But as soon as jury selection got under way for a trial in which three defendants — Terese Howard, Randy Russell and Jerry Burton — have been accused of violating Denver’s urban camping ban, it became clear that the law itself is under scrutiny.

Five potential jurors were immediately dismissed when they said they couldn’t remain impartial; each expressed thoughts that the camping-ban ordinance, which prevents people from shielding themselves from the elements with anything in addition to the clothes on their body, was unethical.

“Why are we prosecuting people for being homeless? I find that terribly unjust,” said one woman before she was dismissed.

“Personally, I believe ‘no victim, no crime,’” said another man.

“So do you think this is the right kind of case for you?” Rebekah Watada, one of the city’s prosecutors, asked in response.

“No, I don’t think it’s the right case for anyone,” he replied.

Another potential juror said that he thought he’d be able to convict the three defendants if the city proved its case. “But I’ll also bear a sense of guilt,” he added.

The responses highlighted deep unease about Denver’s controversial restriction on camping, which has been in place since 2012.

Defendants Russell, Howard and Burton.
Chris Walker
So far the city has motioned, successfully, to narrow the trial down to the simple question of whether the defendants broke the law — that is, knowingly engaged in camping — on November 28 at two separate locations. The defendants are also charged with interfering with police during those interactions. If convicted, Howard, Russell and Burton each face fines up to $999 and a year in jail.

All three are being defended by civil-rights attorney Jason Flores-Williams, who is also suing Denver in federal court over its homeless sweeps and was the subject of a December cover story in Westword.

“What can you bring to this trial?” Flores-Williams asked the six jurors who were finally selected for the trial – three men and three women.

Attorney for the defense Jason Flores-Williams.
Chris Walker
The attorney then held up his laptop and made an analogy about the case being about more than punching data and numbers into a machine and seeing whether it spits out a “guilty” or “not guilty” verdict based on a calculated interpretation of the law.

Flores-Williams also made reference to Rosa Parks, pointing out that she, too, was breaking the law when she refused to sit at the back of a bus in 1955.

“Your job isn’t to be computers, but human beings,” Flores-Williams said. He argued that his clients were just trying to survive. 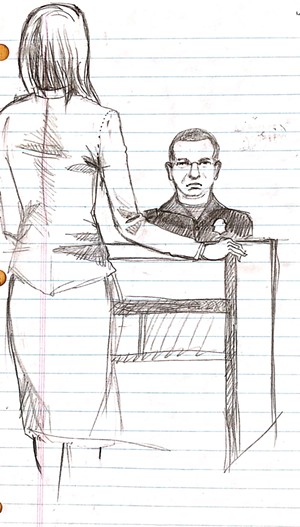 City prosecutor Rebekah Watada questions DPD lieutenant Michael Wyatt.
Sketch by Karen Seed
The city’s prosecutors, Rebekah Watada and Brad Whitfield, called upon five Denver police officers as witnesses on Tuesday and had them explain the dangers and health risks of encampments, as well as how many warnings and offers of services they’d extended to the defendants before issuing citations.

The prevailing message was that the camping ban is a necessary, if sometimes unfortunate, ordinance that rarely rises to the level of issuing citations.

One officer, Samuel Grier, said that he believed one defendant, Terese Howard (an organizer with the nonprofit Denver Homeless Out Loud), had influenced her co-defendant Randy Russell to break the law in order to make a political statement against the camping ban.

“I think she has an agenda,” Grier said. “Russell was compliant until Howard directed him.”

Flores-Williams did not spend time trying to disprove that his clients camped or were at the locations that the city claims they were on November 28.

Instead, he took aim at inconsistencies with how the camping ban is enforced, including getting one officer to admit that he used a bullhorn to wake up the homeless many mornings while other officers said they hadn’t heard of this practice. He also asked the officers to consider his clients' perspective. “How would you feel if you had your blanket taken from you?” he asked one officer on the stand.

The prosecution objected to such lines of questioning, and Judge Lombardi sustained nearly every one on the grounds of relevance.

The trial resumes today, April 5, at 9:30 a.m. and will either conclude by late afternoon or on Thursday.