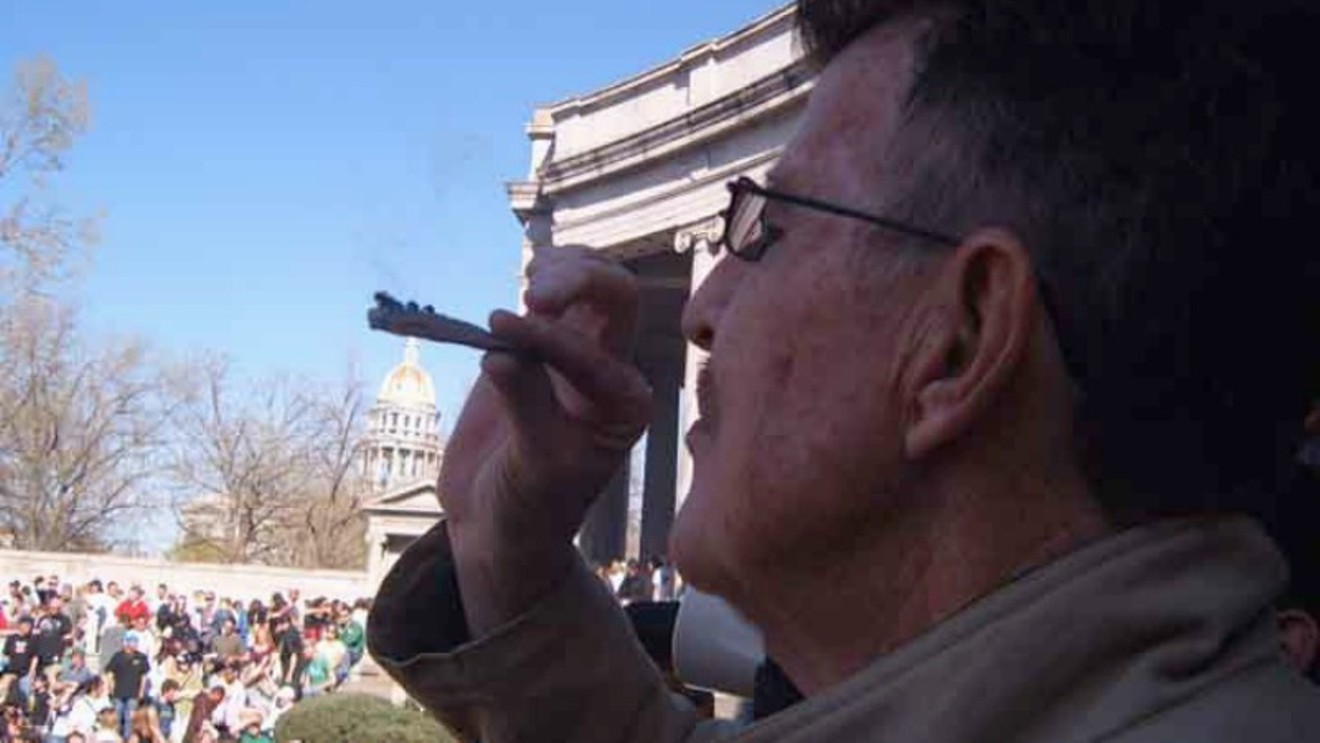 Ken Gorman at the 2006 Denver 420 Rally. KenGorman.org
It's been ten years since Denver 420 Rally founder and groundbreaking Colorado marijuana activist Ken Gorman was murdered in 2007. But he hasn't been forgotten. Indeed, current rally organizers meeting to talk about appealing the City of Denver's three-year ban of the event brought along Gorman's ashes, treating them like the equivalent of holy relics. And the mere mention of Gorman triggered both deep emotion over his loss and anger that his killer or killers have yet to be held responsible for their actions.

"I so much enjoyed my interactions with Ken over the years, and we miss him greatly," said rally attorney Rob Corry. "I wish that Denver put some of the effort it's put into documenting alleged petty violations at our event into solving the murder of such a wonderful human being."

As former Westword writer William Breathes noted in a post published five years after the slaying, Gorman was a Denver native who became active in the marijuana community during the early 1990s. He openly advertised for marijuana on Westword's back page and regularly staged political events at the State Capitol — a tradition fellow cannabis activists continued in his honor after he was killed.

In addition, Breathes wrote, "Gorman helped pioneer the caregiver system after voters approved medical marijuana in Colorado in 2000. A caregiver himself, Gorman was known for his devotion to medical marijuana and helping patients. But he never lost sight of full legalization for everyone." 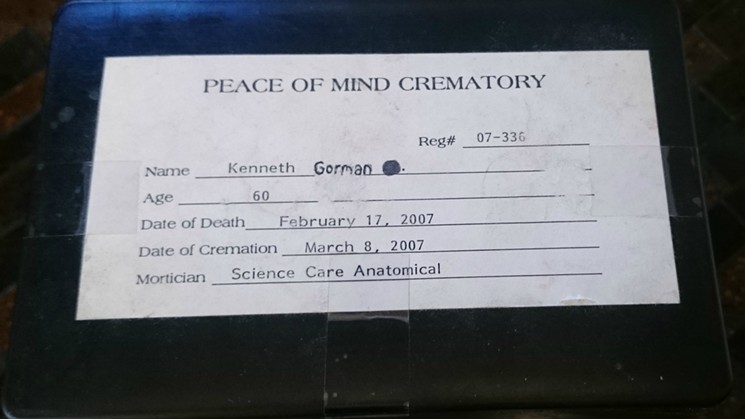 Ken Gorman's remains.
Photo by Michael Roberts
Then came the events of 2007, which are detailed in a feature article by onetime Westword contributor J. David McSwane. Gorman's home had already been robbed several times — crimes that became the focus of a CBS4 investigation — when unknown individuals broke in again on February 17. Although Gorman had purchased a shotgun to protect himself, he couldn't get to the weapon in time. The intruders shot him to death and split, leaving behind few clues and plenty of questions. For instance, if they intended to steal from Gorman yet again, why did they leave behind stacks of cash and bags of cannabis?

Afterward, some observers argued that Gorman was targeted for assassination, as opposed to simply being the victim of a bungled heist. But the Denver police made little progress in discovering the truth, and more than ten years later, the case could hardly be colder.

When asked about her memories of Gorman, Larisa Bolivar, a consultant and historian for the Denver 420 Rally, immediately found herself on the verge of tears.

"Ken came at this from a social-justice direction," she pointed out. "When I moved to Colorado, I moved here as a war-hawk Republican. I used to staff government contracts, and I made good money doing that. But Ken is the one who taught me that there was a lot of social injustice. And then I met Miguel" — Miguel Lopez, the current permit-holder for the rally — "and learned even more." 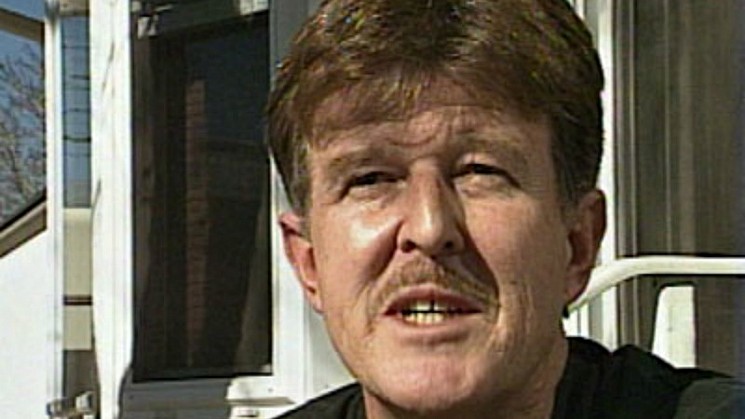 Ken Gorman circa 1990.
KenGorman.org
She added, "They opened my eyes to the drug war and the disparities within my own community. Ken used cannabis as a tool to educate disadvantaged, underserved youth about their rights, and he did it very controversially — but through loving commitment and patience."

Bolivar went on to become executive director of the Cannabis Caregivers Alliance, and she noted that "a lot of my volunteers were patients who became my patients. We worked together as a collective with the poorest of the poor — and that's where my compassion came from. Ken taught me about a world I didn't know and put the fire behind that, which made me take risks that were substantial. And I wouldn't have done that if it weren't for him."

After Gorman's death, the police investigation was "ridiculous from the beginning," Bolivar maintained. "They interviewed my ex-husband as a suspect, they treated other caregivers as suspects, and they used what happened to kind of drag the marijuana community through the mud. They just seemed to make no effort — and that's not just a problem with Ken's murder. It just doesn't seem like cannabis social-justice issues or criminal issues in the community are taken seriously because we're already marginalized as cannabis consumers and activists."

In her view, "this was a hit — and it could have been political, since they walked in and shot him, but they left his money and his weed. How can you look at it any other way?" 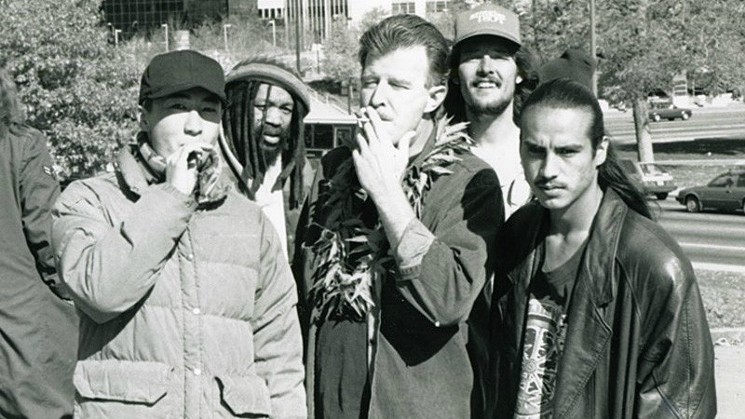 Ken Gorman surrounded by fellow cannabis enthusiasts.
File photo
When Gorman was killed, the plans for the first Denver 420 Rally were already in the works.

"In November, 2006, I said to him, 'Let's put on the first 4/20 rally,'" Lopez recalls. "I'd been around things like that in the Chicano movement, and I thought it would be a good idea — and he said, 'Okay.' But then I woke up to the news that he'd been murdered. We'd talked about doing something, but he didn't get a chance to finish it. So we went to his house and I asked his daughter, Val, if I could continue her father's legacy in April with a rally, and she said yes. And she told us, 'You know, he did all of this for you, because he loved all of you — and he knows that you guys loved him, too.'"

Since the first April 20 gathering, the event has grown into a mammoth undertaking, drawing around 50,000 attendees in recent years. Now, though, the future of the event is in doubt — but Bolivar says the group behind it will use Gorman's inspiration to fuel their appeal.

"We're carrying on Ken's legacy," she says. "Ken is the reason we have legal marijuana in Colorado, period. And we have to maintain that legacy."