What does Stephen Hawking have in common with David Bowie, Alan Rickman and Prince? They've all been mourned on social media in ways that fascinate CU Boulder researcher Katie Gach. YouTube/YouTube/YouTube/YouTube
For folks in the United States and much of the Western world, renowned scientist Stephen Hawking, who passed away early today, March 14, in Cambridge, is the most famous person to die thus far in 2018, and the social-media reactions vary from heartfelt tributes to bizarre takes along the lines of a Facebook item that reads, "Stop trolling. Stephen Hawking is not dead. Chairs can't die."

Such reactions are to be expected according to a recent report by University of Colorado Boulder researchers. The study documents the contrast between posts displaying abject torment and ones from self-appointed members of the so-called grief police and theorizes that these polarizing reactions stem from disputes over whether digital destinations such as comment sections on Facebook posts about star deaths are appropriate places to mourn.

"How people govern each other in public spaces is the main reason we're seeing negativity and argument," says Katie Gach, a Ph.D. student at CU's ATLAS Institute and co-author (with Dr. Casey Fiesler and Dr. Jed Brubaker) of "'Control Your Emotions, Potter': An Analysis of Grief Policing on Facebook in Response to Celebrity Death," a paper accessible below in its entirety.

She adds, "There's no agreement about what this space is for. Is this a virtual wake, or is this someone's living room, where they shouldn't be subjected to these things?"

Over the years, Gach has been fascinated by the way celebrity passings stir emotions among fans and naysayers alike. 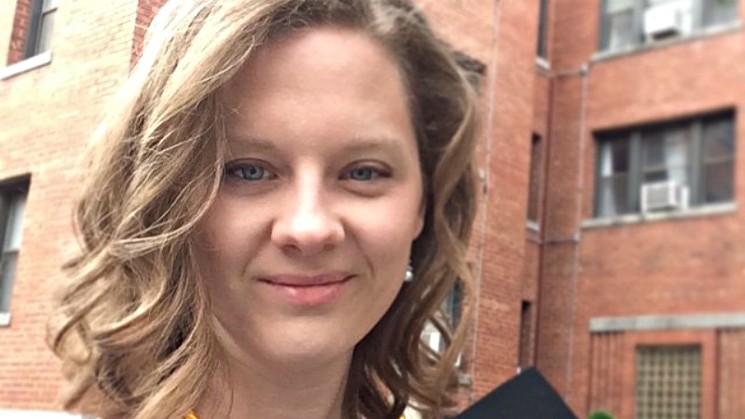 Katie Gach, one of the study's authors.
colorado.edu
"I noticed the responses to the deaths of people like Robin Williams and Whitney Houston — really iconic public figures," she recalls. "I thought it was so interesting that you can genuinely feel grief or a connection to someone you didn't even know — and I think it was really difficult for people to know that Robin Williams's life ended in suicide, because he was such a source of joy for them. That caused a lot of divisiveness."

After Gach began working with Brubaker, an assistant professor specializing in information science, her interest in online identity grew — and then, in January 2016, she says, "David Bowie and Alan Rickman," an actor best known for playing Snape in the Harry Potter films, "passed away within a day of each other. And the reaction made me think it was the universe telling me I should look into this."

Using Bowie, Rickman and Prince (who died that April) as subjects, Gach and company poured through more than 7,000 Facebook comments, and the results were fascinating.

"It was so different with all three of them," she recalls. "There was a lot of sadness over David Bowie, but there were also accusations about him supposedly having relationships with minors earlier in his career. The words 'pedophile' and 'predator' were thrown around, with some people saying he didn't deserve to be mourned publicly for those reasons. Some similar issues came up with Prince, too." 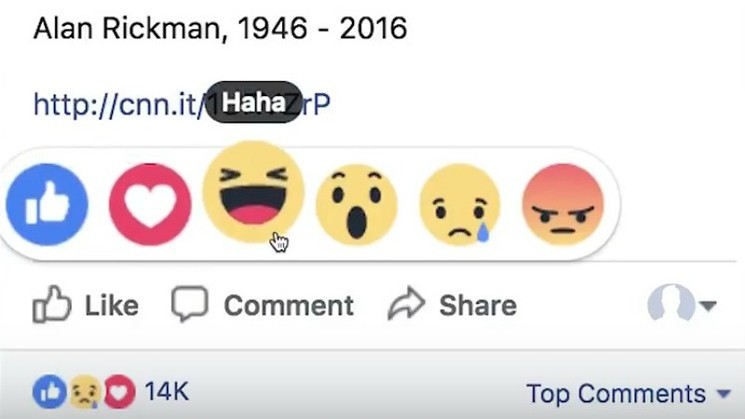 An unsympathetic emoji choice made in connection with actor Alan Rickman's death.
colorado.edu via YouTube
In contrast, Rickman "was this very innocuous figure," Gach maintains. "He played a lot of bad guy characters, but as a person, he was a respected British gentleman, a classically trained actor who worked in theater and film. Everyone who interacted with him in person had good things to say, and I thought that was going to carry over into the reaction to his death, because he didn't seem controversial at all. But that wasn't the case."

For example, she continues, "there were a couple of threads where people criticized him for being anti-Israel because he'd directed a play [My Name Is Rachel Corrie] that had run in New York for a while and was seen as pro-Palestine. That led to some people saying he did or didn't deserve this kind of respect after his death."

Political matters weren't the only things that divided reactions to Rickman's death, though. Gach notes that "we found arguments about who deserves to be mourned in public — like, 'Why are you crying for someone you didn't even know?' or 'Why are you grieving for an actor who didn't do anything significant in the world? You should grieve for soldiers who gave their lives for you.'"

Gach uses this last statement as an example of the ways she tried not to take sides in her work. 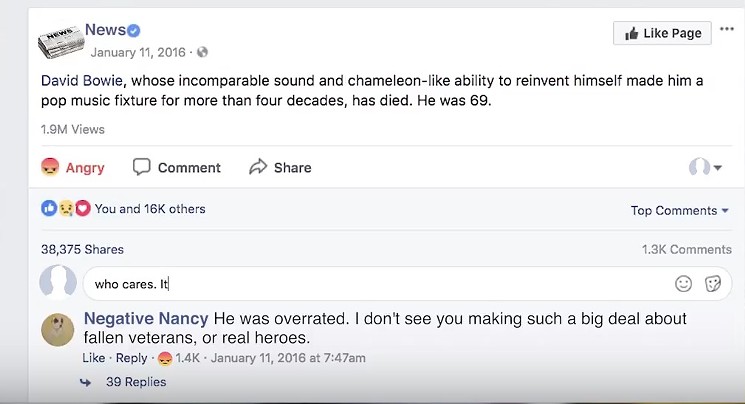 This example of criticism of David Bowie mourners was penned by "Negative Nancy."
colorado.edu via YouTube
"Even if I disagree with everything someone is doing or saying, I'm a researcher, and I have to step back and take on their perspective — and when I do that, it can counteract the negative impressions that can come with this," she allows. "Maybe the person who wrote that was the widow of a veteran, and that experience would legitimize her feeling. There's always a story behind what someone is saying on the Internet, and if I keep those stories in mind, even if I don't know them, that not only keeps me from getting depressed, but it reminds me how much nuance there is in these situations."

Included in the paper's findings are observations that could lead to less online jousting after celebrities perish. For example, the authors point out that algorithms based on click rates tend to prioritize the nastiest exchanges, potentially inspiring extreme reactions that upset people on either side of the issue.

As for Gach, a big Harry Potter fan, she acknowledges that "I was sad when Alan Rickman died. It hit me at my core and really brought out an emotional response from me — and I think that some of the reactions online were comforting for people, because they gave them a chance to connect with someone who felt the same way they did. But I also understand why other people might feel like they're suddenly at a funeral service."

The early responses to Hawking's death appear to be following the pattern observed by Gach. Thus far, we've found loving salutes ("Hope you travel among stardust.... R.I.P Stephen"), ironic observations ("Hawking does the best math trolling. Passes away on Einstein's birthday and Pi Day. Dude") and even alleged remarks from the Almighty by way of this message from @thetweetofgod: "It's only been a few hours and Stephen Hawking already mathematically proved, to My face, that I don't exist."

Click to read "Control Your Emotions, Potter": An Analysis of Grief Policing on Facebook in Response to Celebrity Death.