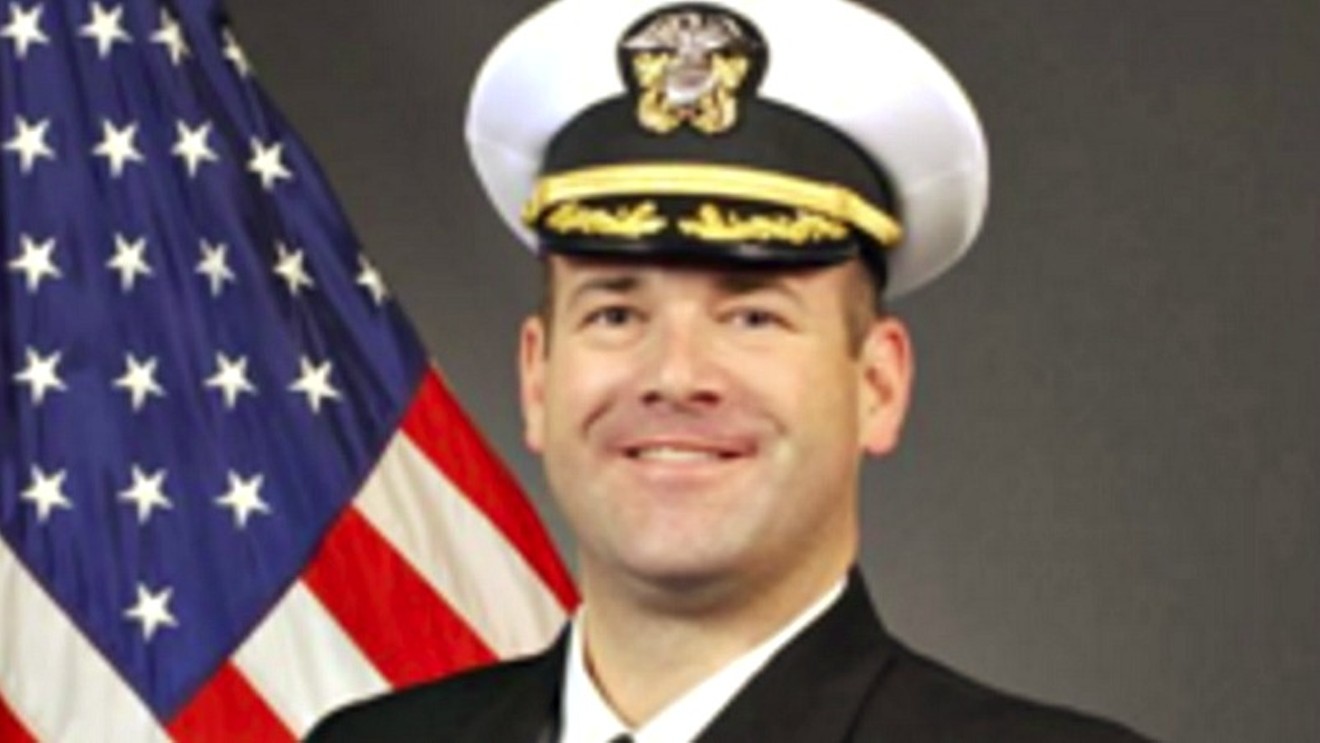 Stephen Shedd during his days as a lieutenant commander for the U.S. Navy. public.navy.mil
The U.S. Navy is currently embroiled in one of the biggest scandals to rock the service in recent memory, with the main targets of a recently unsealed grand jury indictment being nine officers, including Stephen Shedd, an active commander from Colorado Springs. The group, whose self-generated nicknames included "The Cool Kids," "The Band of Brothers," "The Brotherhood," "The Wolfpack," the "Familia" and "The Lion King's Harem," allegedly provided confidential shipping schedules and the like to Malaysian defense contractor Leonard Francis, aka "Fat Leonard," in exchange for bribes such as party time with prostitutes.

The entire document is below. But one amazing line from it — "During the party, historical memorabilia related to General Douglas MacArthur were used by the participants in sexual acts" — should give you a pretty good idea why we've nominated Shedd as our latest Schmuck of the Week.

Shedd served as commanding officer of the U.S.S. Milius, a Navy destroyer, through May 2014. But the indictment picks up his activities during an earlier period: From November 2006 to October 2008, as a lieutenant commander, he was the "Seventh Fleet's South Asia Policy and Planning Officer, in which position he was responsible for identifying ports that U.S. Navy ships would visit consistent with U.S. Navy engagement priorities."

The information to which Shedd was privy while working in the capacity of planning officer was apparently useful to Francis, whose company was called Glenn Defense Marine Asia — and he was willing to pay for it in a wide variety of ways.

Leonard Francis, aka "Fat Leonard."
U.S. Navy via U.K. Daily Mail
The bribery count against Shedd reads: "Beginning in or about May 2007 on the high seas and out of the jurisdiction of any particular district and continuing through at least in or about September 2013, defendant STEPHEN SHEDD, a public official, engaged in a course of conduct whereby he directly and indirectly, corruptly demanded, sought, received, accepted and agreed to receive and accept things of value, personally and for other persons, including cash, entertainment, hotel stays, gifts and the services of prostitutes, in return for being influenced in the performance of official acts and in return for being induced to do and omit [sic] to do acts in violation of his official duties, as opportunities arose."

One example from the document: During a port visit, Shedd and other members of the Wolfpack are said to have stayed at Francis's expense in the presidential suite of a hotel called the Makati Shangri-La in Manila, Philippines. There, Francis allegedly "hosted a raging multi-day party, with a rotating carousel of prostitutes
in attendance, during which the conspirators drank all of the Dom Perignon available at the Shangri-La. Room and alcohol charges borne by Francis exceeded $50,000."

In a thank-you e-mail to Francis, Shedd wrote, "I finally detoxed myself from Manila. That was a crazy couple of days. It's been a while since I've done 36 hours of straight drinking!!!"

Such activities seem to have continued into the next year. In July 2008, the document maintains, Francis e-mailed Shedd and another indictee, the appropriately named Captain Donald Hornbeck, "a naked picture of one of the prostitutes from Manila." Fat Leonard added a notation to Shedd: "I thought this photo will bring memories of the Ens[igns] in Manila. Especially Don." Shedd replied: "WOW!!!!! Is this Don's pet? Georgous! [sic] Great memories!"