Peak to Peak added a brewery in snowy April. Peak to Peak Tap & Brew
Gordon McKennon doesn't mind being judged. In fact, he welcomes it. Late last month, he and his wife, Joy, realized a longtime goal when they opened a small brewery inside of their three-year-old Aurora craft-beer bar, Peak to Peak Tap & Brew. With that change, customers can now do a side-by-side comparison of the brewery's beers with those of other Colorado breweries already on tap in the bar.

"We're in the market late, and we know that," Gordon McKennon says. "And because of how we did this, you as a consumer are comparing other beers against ours. So if they don't stack up, we've failed in a big way."

Still, the desire and the challenge were just too much to ignore. Longtime craft-beer lovers and home brewers, the McKennons were early investors in 3 Freaks Brewery, which opened in June 2014 in Highlands Ranch. But they quickly moved on from that project to do their own thing. "We really had the bug at that point," Gordon says. "We knew we wanted to be in craft beer, my wife and I. Being able to serve that product meant a lot to us." 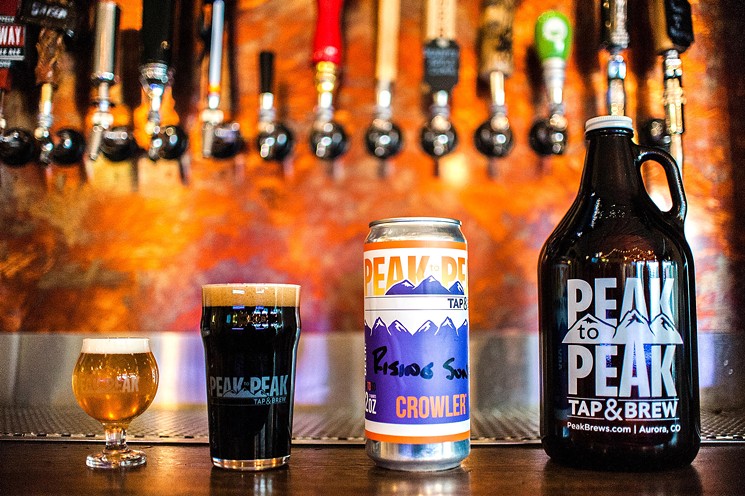 Peak to Peak is serving its own beers alongside beers from other Colorado breweries.
Peak to Peak Tap & Brew
It wasn't easy. The couple had a hard time finding a good space for a brewery, eventually deciding on a small spot next to a bike shop that was only big enough for a kitchen and a beer bar. But they settled in there nicely, serving only Colorado beers on their twenty taps, along with a selection of 35 cans and bottles. They also built a food menu of sandwiches, pulled pork, hot dogs, nachos, mac and cheese and other bar fare.

Earlier this year, the McKennons were able to annex part of the bike shop, nearly doubling their space and paving the way for a larger bar — and a brewery. While Gordon had hoped to buy a seven-barrel system, it turned out that the building was only capable of holding a three-barrel system, so that's what he got. Then he had to take the unusual step of converting his liquor license from a beer-and-wine license to a brewpub license that would allow him to make his own beer. That wasn't easy, either; it's rarely been done in Colorado over the past few years.

But in April, Gordon got that license and immediately hired longtime local brewer Gordon Pencis to take on the role of head brewer; Peak to Peak added ten additional taps and started pouring its own beer in late April.

Is that a brewery in the back?
Peak to Peak Tap & Brew
During the grand-opening celebration last weekend, Peak to Peak Tap & Brew had nine of its own beers on tap, including a witbier, a watermelon blonde, an American pale ale, a session ale, a red, a brown, an IPA, a milk stout and several firkins.

"We are discovering who we are right now as a brewery," Gordon says. "I have a huge book of recipes from being a home brewer, but we don't want to limit ourselves with styles. We are connoisseurs of everything, and we are brewing to our own palate." The idea is for Peak to Peak to focus on fruit beers and on "benchmark" styles so that he can bring in unusual flavors and styles, or big beers, from other Colorado breweries.

"And we plan to be very careful," Gordon says. "We are going to make clear, bright, clean beers and condition them longer than we should."

In the meantime, though, he's trying to get the word out that Peak to Peak is a brewery now — even to his regulars. "A lot of them don't know we added a brewery," he says. "They are so used to walking in and making a beeline to the bar, they don't even see it, so educating them will be a challenge."