According to co-owners Michel Reif and Dash Harrison, the launch for this new location of the deli that got its start at 2532 Champa Street (in the heart of the Curtis Park neighborhood) has taken longer than expected because of unforeseen construction issues. But it will be a welcome addition to the neighborhood, on the edge of Cherry Creek North and Congress Park.

The original Curtis Park Delicatessen opened in June 2011, back at a time when there were not many lunch options available in the area. It has built a loyal following over the last six and half years, mostly because of a singular dedication to the quality of the sandwiches.

“We like to focus on one thing and do that one thing really well,” says Reif. Some delis offer long lists of soups, salads, side dishes and desserts, but the crew at Curtis Park Delicatessen keeps the attention on sandwiches. Bags of chips and a few baked goods are the main accompaniments, although coffee drinks, kombucha and other specialty beverages are also available. 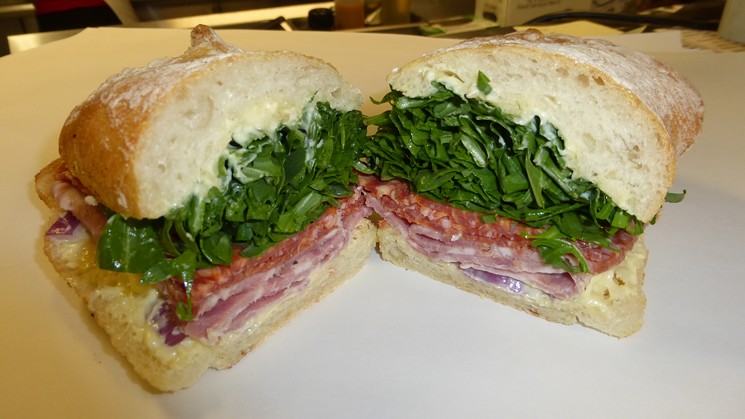 This Curtis Park Deli sandwich will soon be available on East Sixth Avenue.
Ken Holloway
Reif is a Colorado native and is committed to sustainability, local sourcing, organic farming, reducing the carbon footprint of restaurants and minimizing waste. Curtis Park Deli's recipe for freshness includes locally grown greens and other produce, artisan bread brought in fresh every morning from City Bakery, meats sliced to order and even fresh-made condiments, including butter (how many delis do that?), aioli, mustard, pesto, vinaigrette and pickles. The deli also offers gluten-free bread as well as vegan and vegetarian sandwiches.

“What we really love is becoming part of the neighborhood and learning everyone by name," Reif adds.

The new location boasts a custom wall mural, roll-up garage door, plenty of outdoor seating and its own off-street parking. Like the original, the new deli will have a small amount of seating inside, but orders can be called in or wrapped to go, and there will also be catering services for businesses in Cherry Creek North.

Coffee lovers will recognize that the deli is as committed to good espresso drinks as it is to sandwiches. Kaladi Coffee Roasters provides the beans and every latte, Americano and cappuccino starts with a double shot of espresso served in a ceramic cup. You won't find flavored syrups, but sugar cubes are available for those who like it sweet. Other drinks include flat whites and long blacks, representing Australia and New Zealand's contributions to coffee culture.

Whiles sandwiches and coffee may count as two things, Reif and Harrison look to be living up to their promise to do one thing and do it really well — in two Denver locations.