Cast Your Vote for the 2023 Colorado DIVAs

Jessica L'Whor created the awards in 2018. Ben Seagren
The Colorado Drag, Initiatives and Variety Awards (DIVAs) were created in 2018 by Denver-based drag queen Jessica L'Whor to celebrate the vibrant queer nightlife scene in Colorado. Inspired by New York City's GLAM Awards, which are on their 24th year, L'Whor wanted to unite and honor people in all facets of the industry, from drag entertainers to bartenders.

"I've wanted to do an awards ceremony for years, and I couldn't find anybody that was serious at the time about doing it," she recalls. "When I say I'm going to do something and I want to do it, I will go ahead and do it myself. That's what I did the first year. Was it perfect? No — but it was a start."

The first DIVAs ceremony took place in 2019 (celebrating achievements in 2018), and L'Whor has hosted one almost every year since, with the exception of 2021, because of the pandemic. The 2023 DIVAs ceremony will take place at X Bar on February 27, but you can cast your votes for your favorite performers, venues and more from now until Wednesday, February 1. The Drag, Initiatives and Variety Awards celebrate the people of Colorado's queer nightlife scene.
Courtesy of the DIVAs
The DIVAs have been a little bit different each year, as L'Whor puzzles out what works through trial and error. She started off with a lot of highly specific categories, but discovered that they left the nominees feeling pigeonholed. "For the first DIVAs, we had 52 categories; it was insane. We had Best Drag Queen, Best Drag King, Best Nonbinary Performer, Colorado East, Colorado West, and people were like, 'Why am I getting put into a category just for makeup?' or 'I don't always identify as a king.' Even though it was all in good faith, people did not enjoy it, and that's kind of why it's been whittled down," she explains. The second year, she narrowed it down to twenty categories, and this year there are sixteen, ranging from Best DJ to Best Nightlife Photographer.

However, one category actually pre-dates the DIVAs and has remained a mainstay throughout the awards' evolutions: the Freshest Faces of Drag award.

"The Freshest Faces award was actually started by Keith Garcia many years ago, and had its debut in Westword. Because of that, we created this award for the DIVAs, and [we have] fifteen or ten [winners] depending on the year, but they're all voted on and nominated by the public," says L'Whor, whom Garcia declared one of the Freshest Faces of Denver Drag in 2016.

Last year, the Freshest Faces award was one of the only awards given out, and it was the only award voted on by the public. While a few other community awards were given, including to Black Pride Colorado for its inaugural year, L'Whor decided against having other individual categories for the 2022 DIVAs, because so many entertainers were still navigating COVID fallout.

"It didn't make sense to try and do anything more than the Freshest Faces when everybody was struggling to get through 2021," she says. This year, she's brought back several other awards, with all of the nominees and winners left up to a public vote. Members of Black Pride Colorado receiving an award at the 2022 DIVAs.
Courtesy of the DIVAs

While the Freshest Faces nominees are generally people who are new to the Colorado drag scene, that doesn't have to be the case, L'Whor says: "Freshest Face means bringing fresh ideas. It's not just being new to the scene, it's, what have you done to contribute new things to the scene." Case in point: One of the Freshest Faces winners from last year, King Vaughnz Spanic, is among the twenty nominees for the same award this year, and technically, he could be one of the ten winners again if the audience chooses. "People vote, and whatever happens happens," says L'Whor.

She also decided to add a new category to the 2023 DIVAs, cheekily named the "Not So Freshest Faces" award, to celebrate the drag performers who have been holding the scene together for years. "We could kind of say we've done it in the past, because we've done 'Best Drag Queen' or 'Best Legendary Queen,' but I think this was a way to make a humbling play on words for the awards ceremony," she says with a laugh. "We still want to recognize people who aren't just new to the scene, and I wanted to find something that was more playful than 'Best Drag Entertainer.' This is just another way to say that these awards are very much a fun thing."

Hilariously, several of last year's Freshest Faces winners, including Aria PettyOne, Bambina Donutt, Juiccy Misdemeanor and Samora Kash, are already nominated for the Not So Freshest Faces award this year. They grow up so fast! 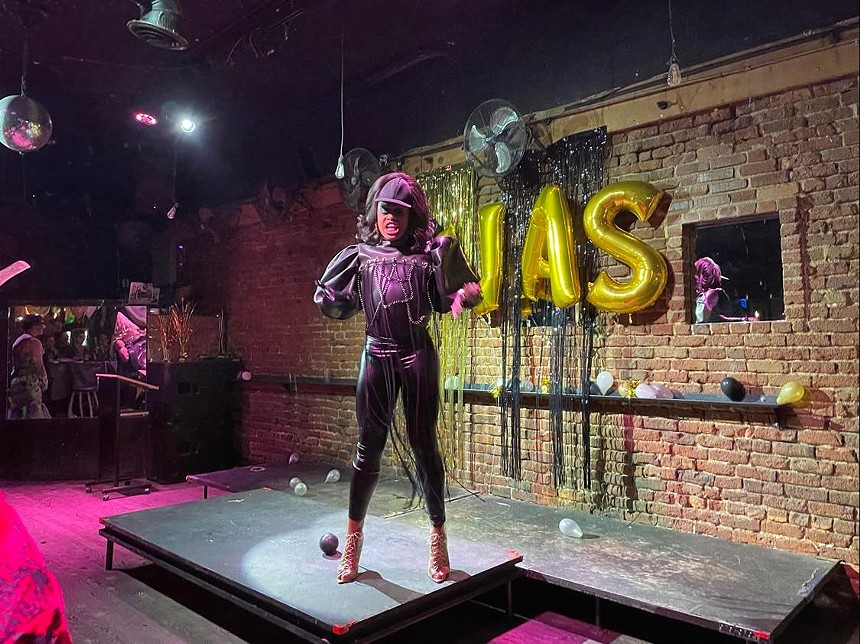 Unlike last year's ceremony, which mostly focused on the Freshest Faces winners, all of the awards will be presented in person at this year's DIVAs. L'Whor will host the awards ceremony at X Bar, followed by an after-party co-hosted by Felony Misdemeanor. "You'll also have Zarah Misdemeanor and Dixie Krystals on the red carpet, and Laura Menorah wandering around kind of playing Joan Rivers, going up to people and interviewing them," adds L'Whor.

The after-party will include performances from national headliners Jayla Rose of Lizzo's Watch Out for the Big Grrls, Chicago drag icon Khloe Coulee, Houston's bearded beauty Blackberri, Mr. Gay United States 2021 Solo Jackson and a surprise guest. The theme of the evening is "Kaleidoscope," so guests are encouraged to wear something shiny, metallic, bright or colorful. Tickets are $15 at the door and include one drink, light refreshments and access to the awards show and after-party. Hints L'Whor, "This is going to be quite the party, and you're not going to want to miss out!" Laura Menorah (far right) will be doing Joan Rivers-style red carpet interviews at the DIVAs again this year.
Courtesy of the DIVAs

Visit the Colorado DIVAs website for more information and to vote for the winners. The fourth annual DIVAs ceremony happens at 8 p.m. Monday February 27, at X Bar, 629 East Colfax Avenue. Tickets are $15.
KEEP WESTWORD FREE... Since we started Westword, it has been defined as the free, independent voice of Denver, and we'd like to keep it that way. With local media under siege, it's more important than ever for us to rally support behind funding our local journalism. You can help by participating in our "I Support" program, allowing us to keep offering readers access to our incisive coverage of local news, food and culture with no paywalls.
Make a one-time donation today for as little as $1.