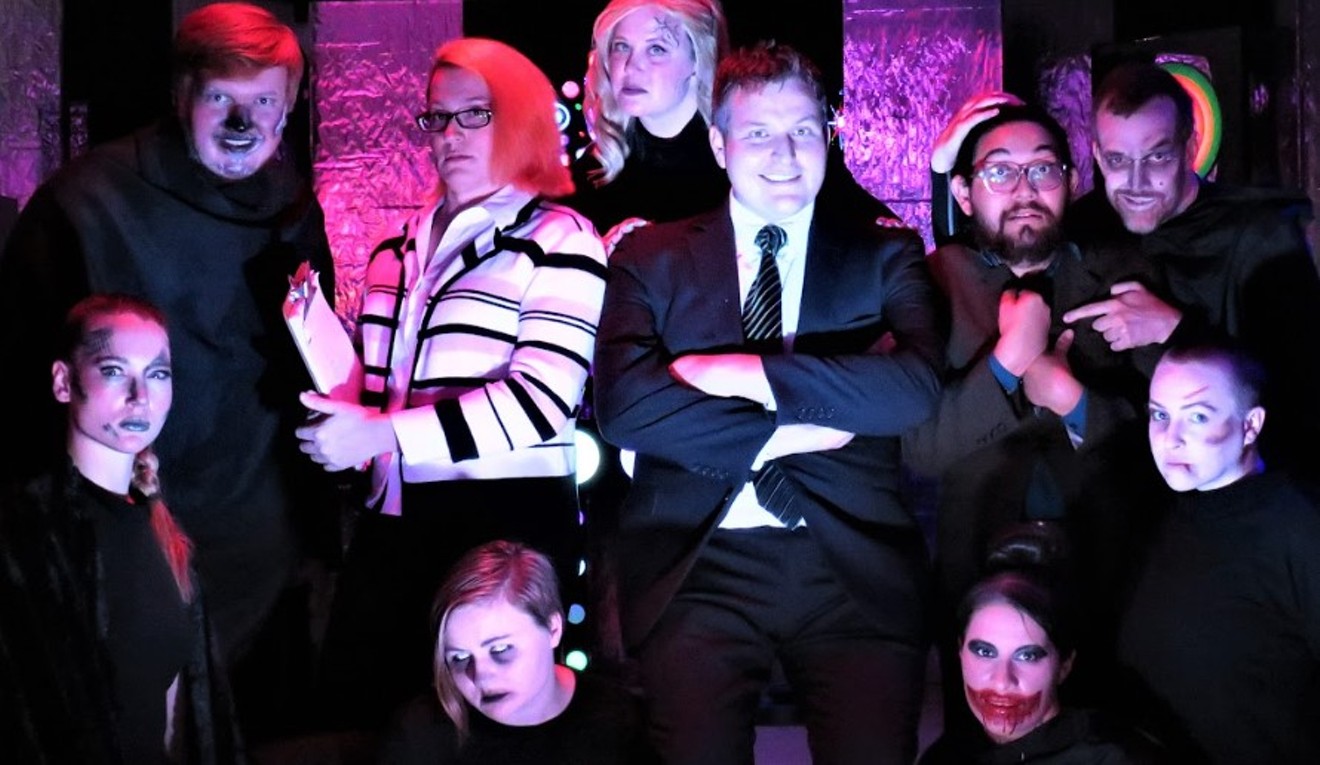 The cast of Project 7 Sins. Audacious Theatre
For six years, Audacious Theatre has been making a name for itself in immersive productions. Whether it's channeling Grimms' fairy tales, true crime or the supernatural, the theater's annual Halloween show is sure to be an event to remember.

Even at the height of the COVID-19 pandemic, the built-in versatility of immersive theater gave Audacious an edge. In 2020, for example, it produced Murder at the Drive-In, where audience members could watch the action from the safety of their cars, and even listen through their car radios.

Audacious Theatre is now back to four productions a year, including a brand-new Halloween show written by Denver professor and playwright Rebecca Gorman O’Neill. And because it’s the company's seventh year, it was agreed that this would be the perfect time to craft a story centered around the seven deadly sins.

Project 7 Sins, with the tagline “Virtue is overrated,” can be seen at the Lumonics Light & Sound Gallery on Fridays and Saturdays from October 14 through October 29.

Also known as the cardinal sins, the seven deadly sins are, in Christian tradition, envy, gluttony, greed, lust, pride, sloth and wrath. In this production, each sin is represented by a person.

“In the casting, we had a really interesting time because we didn't go with your archetypical looks,” says O’Neill. “Like, you'd think of Gluttony as being a really heavy person, [and] Lust is almost always historically portrayed as feminine and feminine-expressing. So this is sort of casting against type and using that to lean into aspects of the character. Our Gluttony is a very, very small person, because she's always hungry.”

“I feel like we got to explore some of the different interpretations of what those sins meant and how they are different nowadays,” adds director Logan Custer. “I just saw lots of opportunity for comedy in all of that exploration, as well.”

Juxtaposed with this humanization and rebranding of the sins is a morally dubious corporation, Sinnovation. "Representatives" of Sinnovation will be welcoming audience members into the space and providing a tour as part of the pre-show experience.
Lumonics, an immersive light gallery, is the most technologically advanced space Audacious Theatre has ever worked in. There’s also lots of room to move around during the hour-and-a-half-long production. “The idea is that everyone has been invited to a really cool Halloween party,” O’Neill explains, “and as you walk in, you realize [it's] maybe not so much a Halloween party as...a Tupperware party, where you're going to be asked to buy stuff.”

Or rather invest in the tantalizing new startup that has figured out how to monetize the Sins. It’s all going well until the personified sins get loose, and chaos ensues as everyone — including the audience — tries to contain them.

“The show isn't very scary, to be honest,” says Custer. “It's a Halloween show, for sure, and it's got some spooky aspects to it…but it's really an opportunity for the audience to explore what the sins are in themselves and find some safety in those things, and also find a little bit of danger.”

“Part of it is also looking at things that we call bad and recontextualizing them — sort of humanizing them and making them into something that the audience can feel good about,” says O’Neill. “You know, feel okay about being prideful about something, feel okay with shutting off and doing self-care — and that's our apathy.”

“We have some…activities where the audience has to share personal stories from their experience and really have some vulnerability,” adds Custer.

Not everyone has to participate and engage with the actors, however.

“There’s a button that you wear if you want to be interacted with,” says O’Neill. “I'm not getting dragged up on stage by somebody, I get to choose my level of involvement. It’s about making a safe space, where all sorts of people can feel comfortable.”

The actions of those who do participate, however, will impact the progression and outcome of the show. In some ways, it's similar to an escape room, where participants are ostensibly locked in a room and have to solve a series of puzzles to get out.

“We do have those interactive pieces when the audience members are coming and doing different tasks, trying to re-contain these Sins,” notes Fabian Vazquez, a first-time Audacious Theatre performer. “They'll throw the craziest things at you, and you just have to throw them back at them.”

“There's just something about getting your hands on what's going on and really actively engaging with it,” says Custer. “I feel like people not only have more opportunity for joy when they're playing, but they also pay more attention in a lot of ways.”

However audience members choose to be involved, they are unquestionably a vital part of the show.

“We get so much from [the audience], we just feed off their energy,” says Vazquez. “These past two previews that we've had really…elevated the show from where it was at the rehearsal process because of that audience there.”

Project 7 Sins, 8 p.m. Fridays and Saturdays, October 14-29, Lumonics Light & Sound Gallery, 800 East 73rd Avenue. Tickets start at $35.
KEEP WESTWORD FREE... Since we started Westword, it has been defined as the free, independent voice of Denver, and we'd like to keep it that way. With local media under siege, it's more important than ever for us to rally support behind funding our local journalism. You can help by participating in our "I Support" program, allowing us to keep offering readers access to our incisive coverage of local news, food and culture with no paywalls.
Make a one-time donation today for as little as $1.