Back to the Blacktop: Denver Chalk Art Festival Is Celebrating Its Twentieth Year The Denver Chalk Art Festival has been bringing people together for twenty years. Michael Rieger
To say the least, 2022 has been a year of resurgence: Denver creatives are bounding out of the pandemic with bundles of new work, providing plenty for both city and suburban dwellers to soak up and take part in at arts events across the city, from gallery openings and First Fridays to theater productions and live music. This year also marks a milestone for the Denver Chalk Art Festival, which celebrates its twentieth anniversary this Labor Day weekend.

The colorful event is a long-beloved outdoor exhibition of street painting, showcasing spectacular, intricate artistry and a community like no other. “The synergy that happens at this event is amazing,” says Denver Chalk artist director Michael Rieger, who also owns Lapis Studio Denver on Tennyson Street.

Over the past two decades, artists have continued to return to the festival — a validation of the community it has aimed to build. And the 2022 iteration will be Denver Chalk Art’s biggest since the start of the pandemic: Alongside production director Renee Ortiz and sponsorship/PR director Radhika Mahanty, Rieger has gathered approximately 200 artists, 95 percent of whom are local, to participate. That translates to about 100 squares of art, as many of the pieces are created by teams of two. 2019's Second Place Winner - "Butterfly in the Sky," by K. Vuletich
Michael Rieger
“Our artists have gotten better and better over the years, but every year we have new ones, which is great,” says Rieger. “I love to see people who have never done chalk before and are trying it out for the first time, and the ones that have been coming back for seventeen, eighteen years. There’s just something about the synergy of all those people creating art together.”

It’s also the festival’s first year at its new location, in Denver's Golden Triangle Creative District. Utilizing the Evans School as the artist headquarters, the event will take place on Acoma and Bannock streets between 11th and 13th avenues. “It's going to give everyone more room to work and more room to view the art,” notes Rieger. “I think it will be a great long-term location for us.”

For its first seventeen years, the festival was held in Larimer Square. It was founded in 2003, when Rieger and his creative cohorts decided it was time to bring something new and unique to Denver. “When we started, we wanted [to put on] an event that Denver didn’t have...something that would be good for everybody, a whole range of people,” he recalls.

That first year, the festival had 42 artists lined up down the center of Larimer. “Over half of them were my friends that I just dragged down there,” Rieger remembers. “Everyone was like, ‘We’ve never done chalk art,’ and I’m like, “I’ve never done chalk art, either. Let’s go do it!’ So we all went down and we had a blast. The next year, we doubled in size.”

The Denver Chalk Art Festival has grown steadily since that time — a big reason for the change in location. “I think maybe in those first few years, ten or fifteen thousand people would come see the festival. Back in 2019, we had well over 150,000 people, and we had 237 artists,” says Rieger. “We just outgrew Larimer Square. It was too big of a crowd.” 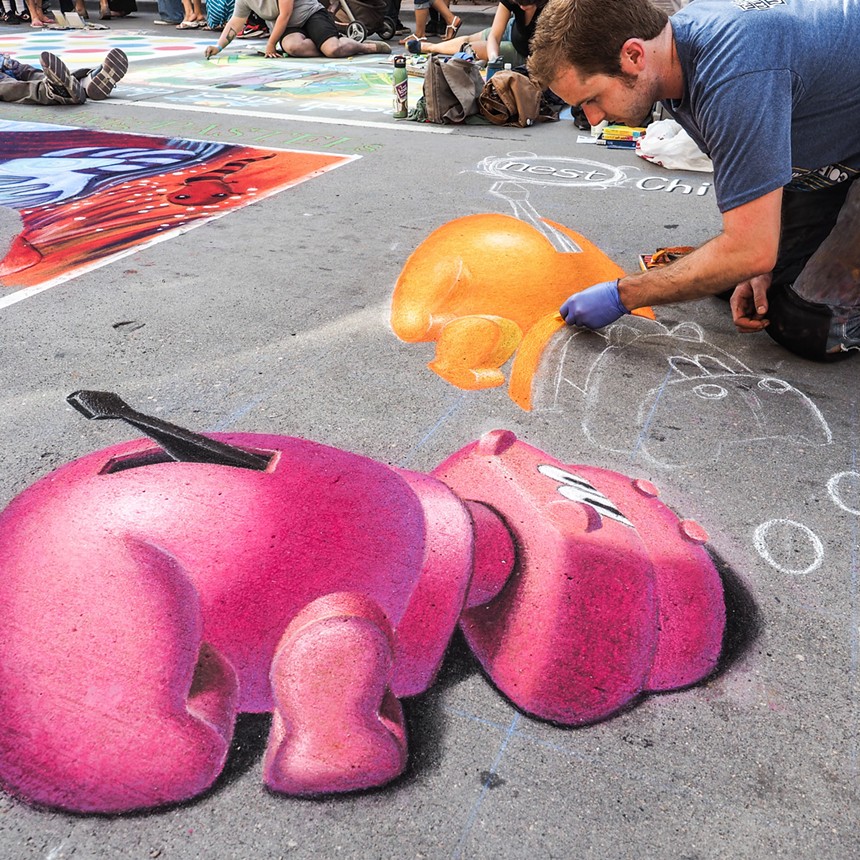 Michael Rieger
The pandemic prompted several shifts for the festival over the past two years.

In 2020 the event went virtual through Facebook Live, with each artist drawing and broadcasting from their own driveways. “I was so adamant about making sure we did a festival that year even though it had to be virtual — just to give artists the chance to get out there and draw, see each other and create together, even if it was just through the computer,” says Rieger. “It still brought in that community.”

And in 2021, not long after leaving Larimer Square, the festival had to find a new nonprofit to partner with. That year, it partnered with Cherry Arts and held a small boutique festival with just 42 artists on site at the Cherry Arts Festival. The partnership felt like the perfect fit, and Cherry Arts signed on again this year.

Spectators have a huge range of artwork to look forward to this weekend, from re-creations of master works to 3-D interactive pieces. There will also be five Madonnaris (the Italian term for a professional street painter) creating signature pieces, including famed artists Julie Kirk Purcell and Dawn Wagner.

Teams will be given an 8' x 8' blank canvas on the street for their work; the artists aren’t required to fill it, but are asked to hit 8 feet in at least one direction. There will also be a handful of 8’ x 12’ canvases reserved for larger teams who are making 3-D anamorphic drawings, which require a longer swath of space to create the optical-illusion effect. 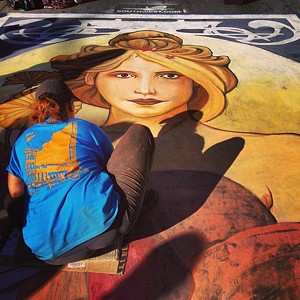 Each square will be sponsored by a Denver-based small business, and each team will write or draw the name of their sponsor above their square. “Usually with this type of festival event, small businesses can’t touch it [in terms of sponsorship],” Reiger says. “But with these squares, it’s just a $500 donation. It’s a great way for small businesses to help underwrite the artist community of Denver, and to help get their name out there.”

There will also be a youth division, inviting kids ages fifteen through eighteen to form artist teams of three to eight people and take on an 8-foot square. “We have artists that started out in the youth challenge and they’re now participants,” says Rieger. “We have a three-lady team that comes back every year; they started in high school together, and now they’ve taken first place a few times.”

The event will be juried, with artists judged on more than just their finished work. “Chalk art is a performance-based work; that’s why people love to come and watch,” notes Rieger. “People love watching [the artists] being creative. So they’re actually judged on how they make their drawing: Are you creating that image in a way that makes your audience go, ‘I gotta come back and see this’?”

While the Chalk Art Festival takes place over three days, the work needs to be finished by the end of the second day so that the third can be devoted to viewing. An awards ceremony will take place in the morning, and then artists will have the rest of the day to engage with visitors or put any finishing touches on their pieces. Michael Rieger
The festival will be augmented by plenty of food vendors and beer and wine; a central stage will showcase live music from local bands all weekend. There will also be a kids' corner with limitless chalk, where families can go and draw when they feel inspired.

“Bringing Denver families together is one of the things I just love about this event,” says Rieger, “And it’s accessible for everybody. It’s an easy way to really interact with a lot of art. It’s a museum on the ground.”

“Come early and come often," Rieger advises. "To watch the art progress is really quite fascinating. Come down and make a day of it — see the art, enjoy the food, listen to the music. It’s really a community that puts on this festival. It’s the artists, it’s the businesses, and it’s the people who come to support it.”

Denver Chalk Art Festival, September 3-5, Golden Triangle neighborhood between Acoma and Bannock streets and 11th and 13th avenues. Admission is free; find out more at denverchalk.art.
KEEP WESTWORD FREE... Since we started Westword, it has been defined as the free, independent voice of Denver, and we'd like to keep it that way. With local media under siege, it's more important than ever for us to rally support behind funding our local journalism. You can help by participating in our "I Support" program, allowing us to keep offering readers access to our incisive coverage of local news, food and culture with no paywalls.
Make a one-time donation today for as little as $1.