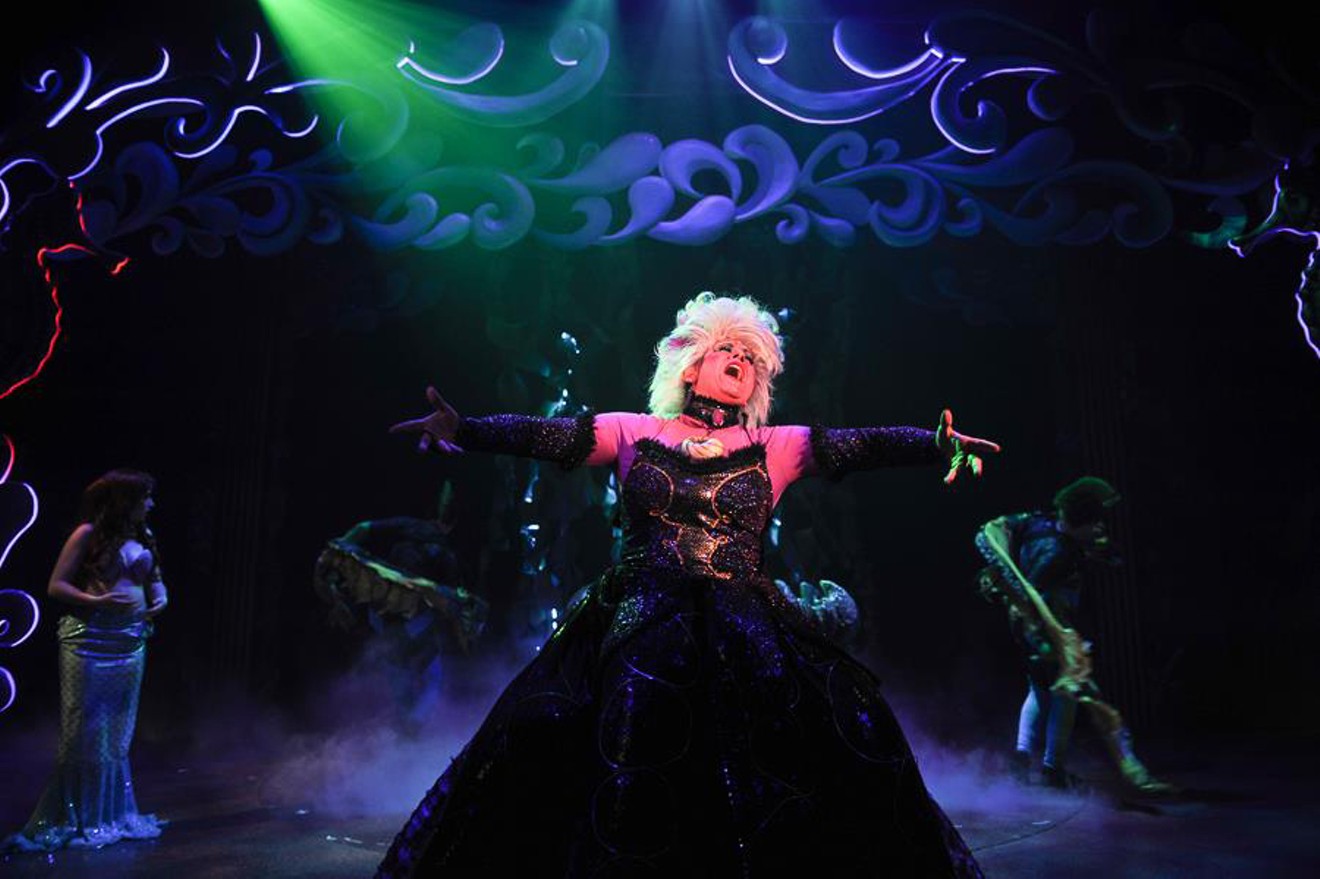 Alicia K. Meyers in The Little Mermaid. BDT Stage Facebook
BDT Stage has been around since 1977 — pretty much the heyday of the dinner theater movement in the United States. In March, the company opened its production of Ragtime; the day after opening night, BDT was forced to shut it down again over COVID-19. This was heartbreaking, says artistic director Michael J. Duran: “It had been very difficult bringing a cast together, and when we did, they were incredible. We had a beautiful, poignant show. I was so proud of it and the entire team. We all hoped that we would be able to get back up after a short time. We had no idea that we would still be doing this seven months later.

“This has all been extremely difficult to navigate. How do we stay creative, keep our people working and keep everyone safe — employees and the public? We're faced with tough restrictions by the state and the City of Boulder. We are allowed 50 percent capacity or fifty people, whichever is less. So that limits us to 50 people. Singers have to be 25 feet from the audience, which limits us even further. We did a few concerts inside the theater in June, but they were sparsely attended.”

BDT followed with concerts in the parking lot with a limit of 112 safely distanced attendees who were served picnic dinners. These were a success, says Duran, “if only for the fact that they gave us an opportunity to perform live in front of an audience, and it provided our audience a much-needed night out, listening to live performers.”

Now, however, an upcoming production of It Takes Two: The Duets of BDT has been canceled, the theater has gone dark, and no one can say when — or even if — it will reopen. “I'm trying to remain as hopeful as I can, given the fact that we have so little control over what we are able to do,” says Duran.

BDT Stage has played a role in my theater-going life for a long time. I first attended a performance very early in the company’s existence and was unimpressed. Despite the hoopla surrounding the opening, what I saw felt like a high-school production. I don’t even remember what the show was, but I do remember a set that seemed to comprise a curtain of dangling tinsel and the fact that the accompaniment to the songs had been pre-recorded, which meant that if a singer coughed or hesitated a second too long, they would find themselves completely out of sync.

The cast of Mamma Mia!
Glenn Ross
Despite assurances from several friends that things had improved, I resisted going back. When I did, I walked into a shining production of Rodgers and Hammerstein’s Carousel starring Wayne Kennedy and Shelly Cox-Robie. Perhaps you remember the score, which includes some of the loveliest and most powerful songs ever written for a musical: "If I Loved You," “You’ll Never Walk Alone” and "Billy’s Soliloquy" (My Boy Bill). Cox-Robie’s Julie, with her warm, clear, lovely voice and aching sincerity, was a revelation, and I’ve never forgotten the power and passion that Kennedy brought to My Boy Bill. The set and costumes were well done and the musicianship first-rate. (For the past several years, Linda Morken has been designing the costumes and Amy Campion the sets, while Neal Dunfee serves as musical director.)

After that, I started attending and reviewing faithfully, and though there might have been a few stumbles, the experience was always worthwhile — even more so, perhaps, when Duran took the reins seventeen years ago. Sometimes, given that dinner theater as a genre isn’t generally held in great esteem, I wondered if I was going soft or too anxious for a lighthearted evening of singing and dancing after too many rigorously demanding shows. But not all BDT productions are lighthearted, and I also noticed that friends kept asking to accompany me to the place — and it wasn’t just because the food was decent, though it was. There was something else. You usually find a lot of smiling in musicals and a lot of pep, and this can feel purely synthetic. But the folks on this stage actually seemed to be having the time of their lives, singing and dancing full out and acting their hearts out — and their enjoyment was infectious.

I ran these thoughts past Kennedy, who over the years has graduated from playing the youthful Billy Bigelow to more mature roles, which include a brilliantly sad, deep and comic Tevye in Fiddler on the Roof. He validated my impression.

“We really enjoyed one another so much,” he says. “Part of that was management looking out to make sure relationships were good and there was not a lot of drama.” In addition, the company was able to attract many of the area’s strongest performers. “I think they drew some pretty good actors to the place, because it was so steady,” says Kennedy. “That’s a rare gift in this business, to be able to work from show to show to show. People crave that.” In addition to fostering camaraderie, constant employment helps hone individual talent, and also, when actors work together frequently, trust increases, timing gets sharper, and there’s more ability to explore a role. “The learning curve of knowing the other performer keeps flattening out,” Kennedy says. “I begin a show. I’m cast opposite Joanie (Brosseau-Rubald, another veteran, whose sparkling vitality enlivens every show she’s in). I don’t need to get to know her style, how she works, her quirks. You don’t need to waste that time. You can get right to the enjoyable working part of what we do because you know each other so well.”

Michael J. Duran is the artistic director of BDT Stage.
Photo by John Scott Clough
The warmth extends to the audience, Kennedy says, noting that he was often asked about his life and his children when he waited on tables before a show: “It’s a kind of relationship with an audience that’s rare, to have so many people that cared about us personally. To see that kind of dwindle away, that’s pretty hard.”

The show that got canceled in March wasn’t BDT Stage’s first production of Ragtime. That occurred in 2007 and represented an extraordinary collaboration with Denver’s now-extant Shadow Theatre Company and its director, Jeffrey Nickelson, who played enigmatic angel-devil Coalhouse Walker himself, providing a strong presence and a wonderfully resonant voice. (Nickelson died in 2009.)

“Everybody in the building felt that that was a truly unique thing,” says Kennedy. “The people from Shadow came as a group, and it was so refreshing to feel their energy and spirit. There was a moment I’ll never forget: The end of the opening number on opening night. The song kept building and building — there’s the line, ‘People called it Ragtime,’ then it goes silent for a few beats, and when we cut off — the orchestra cut off — you could hear the resonance in the room. Rarely do you get a thrill like that.”

Like Duran, Kennedy can’t fathom the future. “The public-health people don’t seem to have moved at all in terms of live theater,” he says. “There’s no allowance to let us find a way to be profitable while still being safe. Lately, it’s just felt like a slow winding down of everything. I’d been going along being employed until last Saturday, and I’m not sure what the outlook is now.

But "eventually theater will return," Kennedy adds. "It’s part of our culture.”

“Personally, I am unbelievably stressed, as is my whole team,” says Duran. “I worry about every one of the people I work with. How are they going to make it through, financially and mentally? When you are born to do something, whether it's theater, or music or accounting, it's so very hard not to be able to do what you love and are meant to do.

“What gives me the greatest hope is that I have the most incredible team at BDT, and everyone is coming up with creative ideas on how to get through this. The community is also pitching in with ideas. It shows me how loved and valued BDT Stage is in Colorado.”
KEEP WESTWORD FREE... Since we started Westword, it has been defined as the free, independent voice of Denver, and we'd like to keep it that way. With local media under siege, it's more important than ever for us to rally support behind funding our local journalism. You can help by participating in our "I Support" program, allowing us to keep offering readers access to our incisive coverage of local news, food and culture with no paywalls.
Make a one-time donation today for as little as $1.