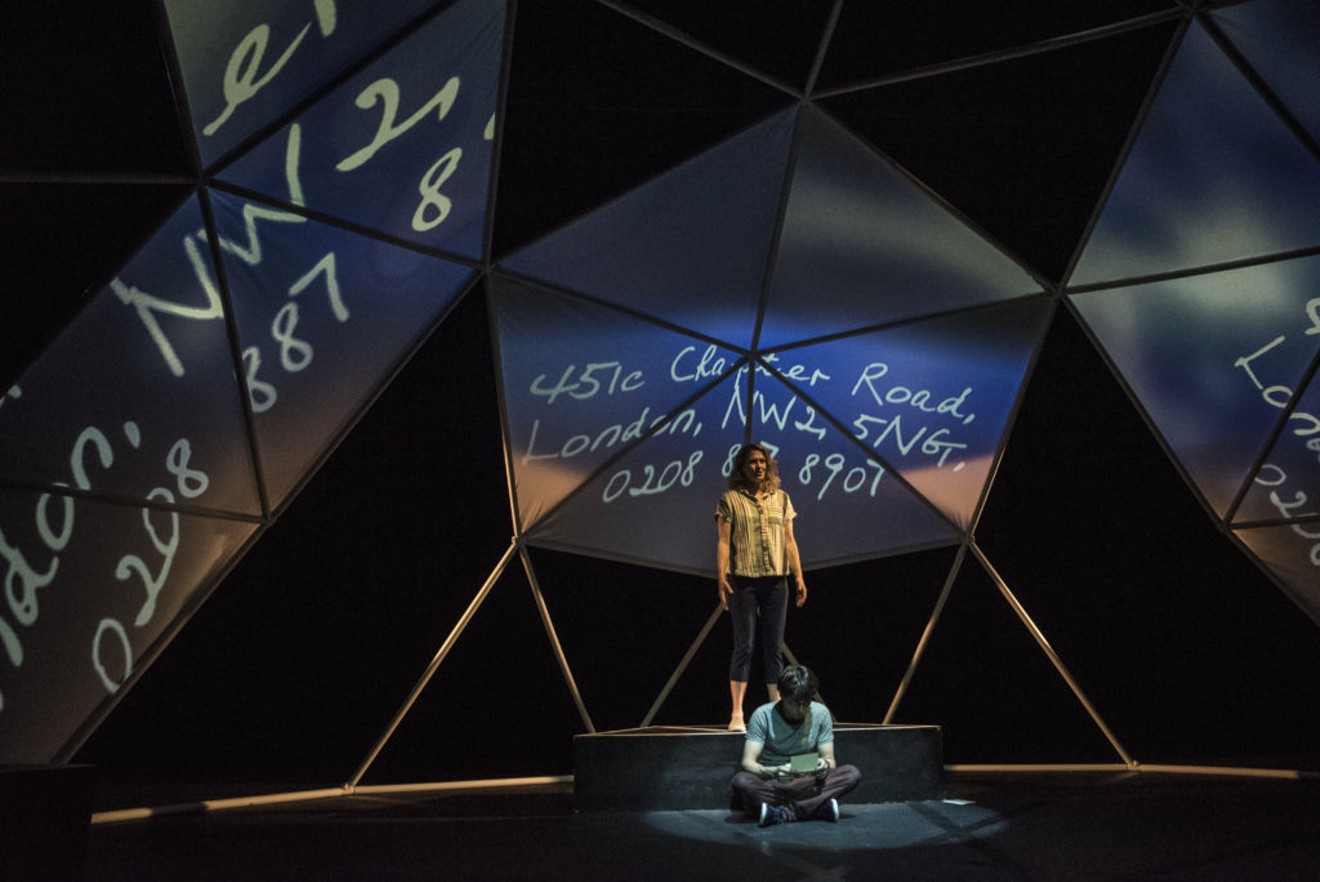 Karen LaMoureaux and Alex Rosenthal in The Curious Incident of the Dog in the Night-Time. Michael Ensminger
Perhaps the hardest thing for parents of neurologically challenged children is understanding what’s going on in their children's heads. They recognize splinters of some of their own behaviors: Who hasn’t had a moment of near-panic on entering a crowded and unfamiliar environment? Don’t we all occasionally crave silence and solitude? And doesn’t almost everyone have some small, unobtrusive rituals that they use to get through difficult moments? But in these children, such characteristics are carried to an extreme — and the child can’t really explain what he or she is feeling and thinking.

Many writers have attempted to enter these closed-off minds. Harold Pinter’s play A Kind of Alaska was inspired by Oliver Sacks’s work with people suffering from encephalitis lethargica and described in his book Awakenings. There's also Arthur Kopit’s Wings, told from the perspective of a woman who has suffered a stroke, and the brilliant essays of neurologist-genius Sacks himself.

In his 2003 novel, The Curious Incident of the Dog in the Night-time, Mark Haddon takes on the persona of Christopher, a fifteen-year-old somewhere on the autism spectrum and with a genius for math. Haddon doesn’t attempt a clinical analysis, but bases his protagonist’s story on his own creative imagining. The stage version, written by Simon Stephens, premiered in London in 2012 and on Broadway a year later, winning a slew of awards. The Boulder Ensemble Theatre Company is now staging the play's first Colorado production (the touring company came through in June 2017).

There is a plot: Christopher discovers that his neighbor’s dog has been cruelly killed with a garden fork. Initially accused himself, Christopher — a fan of Sherlock Holmes (whose work inspired the title) — determines to solve the mystery of this ugly death. But the dog's murder is solved by the end of the first act, and the second act becomes a coming-of-age story, as the teenager searches for the truth about his dysfunctional family — his violent father and absent mother — and in the process discovers some truths about himself. The narrative is supplied by his teacher, Siobhan, reading from a book Christopher has attempted.

The strongest moments are less about plot and more about the workings of Christopher’s mind, which are both narrowly repetitive and as vast and beautiful as the universe itself. When it comes down to earth, the script creaks here and there. Siobhan’s announcement halfway through the action that she’s persuaded Christopher to create a play from his material — the very play we’re watching, in fact — thuds as a device. It adds nothing to the evening: We don’t view the action differently or perceive a change in tone; nothing becomes more consciously theatrical.

Because the story is entirely Christopher’s, and his vision is limited, you never really get inside anyone else’s mind, though some strong performances do bring other characters to life. Billie McBride is touching as the understanding neighbor, Mrs. Alexander, and Warren Sherrill brings humanity and an occasional much-needed touch of humor to a couple of bit parts. Michael Morgan and the always-luminous Karen LaMoureaux do fine work as Christopher’s parents, and Alex Rosenthal plays tic-ridden Christopher with a perfect mingling of vulnerability and stubborn pride. Anastasia Davidson’s Siobhan is charming, but the performance might have been given a little more heft.

The national tour of The Curious Incident of the Dog in the Night-Time, which I saw in Denver, used intense tech to illustrate Christopher’s inner life; the production was dominated by set, sound and lighting, with tall walls that looked like graph paper on which numbers crawled or writhed. When Christopher broke down, overwhelmed by sensory input or because someone had physically touched him, there was an ear-shredding cacophony of sound. Since BETC doesn’t have tens of thousands of dollars at its disposal, director Stephen Weitz makes do with ingenuity, creativity and human energy — along with stylistically choreographed human bodies. Set designer Tina Anderson has come up with an elegant, over-arching and segmented dome onto which images are projected. At one point, huge raindrops slide slowly down the curves of the dome; at another, the drops seem tiny and sharp as glittering diamonds. Both effects are strangely beautiful.

While the cumbersome tech tended to dwarf the actors in the national tour, this production is more intimate, more emotional — and more successful. It's a hugely ambitious project that speaks volumes about the confidence, skill and experience of Boulder’s premier theater company.

The Curious Incident of the Dog in the Night-Time, presented by Boulder Ensemble Theatre Company through May 19, Dairy Arts Center, 2590 Walnut Street in Boulder, call 303-444-7328, betc.org.
KEEP WESTWORD FREE... Since we started Westword, it has been defined as the free, independent voice of Denver, and we'd like to keep it that way. With local media under siege, it's more important than ever for us to rally support behind funding our local journalism. You can help by participating in our "I Support" program, allowing us to keep offering readers access to our incisive coverage of local news, food and culture with no paywalls.
Make a one-time donation today for as little as $1.