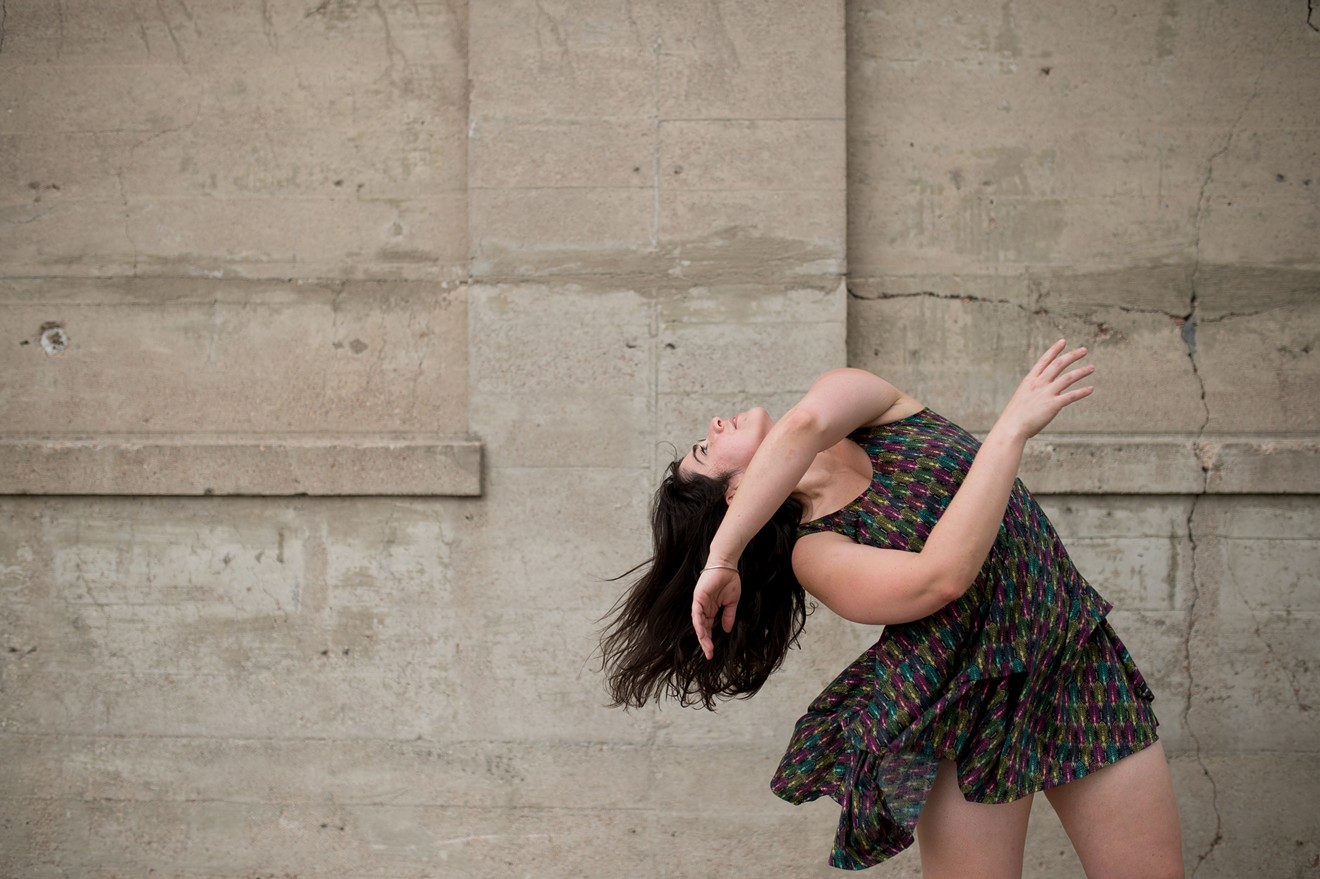 The best choreographers are pioneers in space, intellectually binding movement and ideas in a singular sweep through time. It takes a dynamic, malleable mind to do that, while staying just ahead of trends in the outer reaches of the dance universe. Kate Speer — a consummate collaborationist, recent PlatteForum resident and a member of RedLine’s newest class of artist/residents — has got that down, and you can see her talent at work this month in [Colony 933], an immersive mystery that’s also a participatory journey for artists and audience alike. But she covers it all here, in her answers to the 100CC questionnaire. 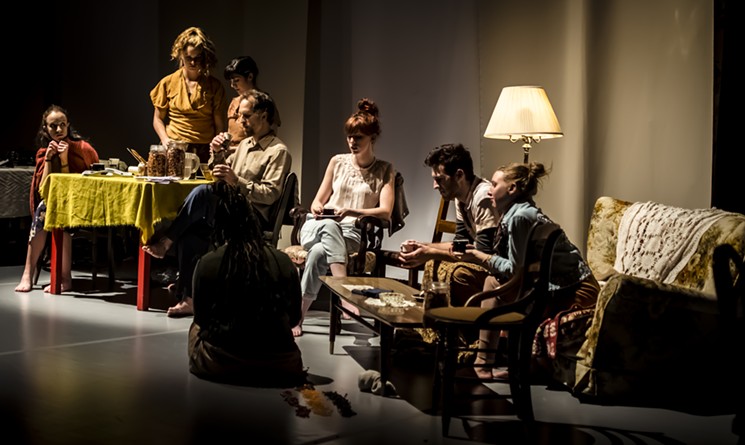 Kate Speer's The Space Within These Lines Not Dedicated.
Courtesy of Steve Stoychev
Westword: What (or who) is your creative muse?

Kate Speer: Music has always been my creative muse. When I first realized I wanted to be a choreographer, it was because I would have these visions of movement and spatial designs of bodies while listening to music. For instance, the ending of [Colony 933] came to me while listening to HAIM’s “Let Me Go.” My one choreographic tool is to use music as inspiration to access a certain movement quality while in creation mode and then switch up the sound for the performance product. And just in general, I relish a good beat that sends my sweaty, exhausted body into motion. Like right now, all I want to do is get in a studio to improvise to Rhye’s new song “Taste.”

I always hate this question, because I’m such an introvert that the thought of having a party with people who I don’t know sounds miserable. To avoid the small talk, I’m going to change it up: the three people, dead or alive, I would like to invite into the next collaboration are:

-Ayn Rand, author of The Fountainhead.


[Borderlandia, seen in the video above, is an immersive performance experience that claims, controls and imagines space while fashioning a map to find home. Made in residence at PlatteForum.]

I have a number of critiques about the local dance community here, but it has more to do with the ecosystem than with the actual creatives making work here. I love that there are a handful of artists who are rigorous in their creative research, constantly investigating how to realize their stagecraft, like Laura Ann Samuelson, Michelle Ellsworth, Tara Rynders and Control Group Productions. However, the dance scene lacks a hub. One of the things I love about RedLine — and this was before I became a resident there — is how it acts as a hub for artists, curators and community organizations. Entering through RedLine’s doors, I started to get connected with the art scene immediately. There are similar hubs for dance and performance in cities like New York, Philly and Seattle, but there’s not a good place to catch class, rent cheap rehearsal space and catch a show by an established touring artist right next to an up-and-coming local. I have a lot of ideas of how we can do better to create a thriving scene. Let’s grab a coffee and get into the details and action plans.

Sometimes I miss France and all the government-funded dance centers that promoted creative research for the sake of culture. Art, like scientific discovery, was valued as an experiment and risk venture necessary for society.

Only if you are aware that you are consciously choosing to follow the trend. One of the funniest moments in making XX: Where’s the Power? was realizing we were following the trend that almost every BFA student has to make a dance in male underwear. Well, darn. Here we are ten-plus years out of undergrad, falling into the trap of exploring female sexuality by wearing male underwear. I think trends serve a purpose because they link us together through a shared cultural history, but if you don’t reflect on why you are following the trend, that’s when it becomes problematic.

What’s your best or favorite accomplishment as an artist?

I know I’m plugging my upcoming show a lot, but [Colony 933] has been a huge, collaborative, co-authored production, and those types of work have been my favorite. I love that there are twenty artists coming together to create this one world. I enjoy facilitating our collective vision, at least to the best of my ability. Collaboration has always been a key tenet of my creative process, both artistically because of the creative sparks made when two minds meet, and politically because of the necessity for multiple voices. And [Colony 933] has been a reminder of how necessary it is to have multiple expertise be part of an immersive work. Too often dance artists on a tight budget do it all, from marketing to sound editing to costume design. I’m constantly reminded of how well artists know their craft, and when given their particular part of the puzzle that fits their interests and skill set, how much more time-efficient and rich the world becomes. I’m incredibly grateful to have the opportunity to work in this way.

Really? I feel like I just got started. Personally, I haven’t yet checked off a long-distance backpacking trip, like the Appalachian Trail or the John Muir Trail. I can’t quite figure out how I can unplug from the Internet (work/income-wise) for a month or more to make that feasible.

[Depicting a multi-ethnic community (reminiscent of Sarajevo under siege during the Bosnian War) in which neighbors and friends redraw boundary lines, Speer's The Space Within These Lines Not Dedicated creates insiders and outsiders, including the audience in these designations.]

I get this question a lot and say I love everything about Denver except the dance community (I guess now I can also add the fact that I’ll never be able to afford a house). Don’t get me wrong: There  are a lot of amazing dance creatives here, but I came in from Philadelphia, that in my mind had one of the healthiest dance networks — or rather net-weaving. And maybe it’s the West’s Manifest Destiny mentality that creates so many siloed artists, but it’s really hard to know who is working where. The funding scene, too, in Philly back in 2008 was really healthy for independent artists. And there’s nothing here. The City of Denver has a few opportunities, but to get a healthy $10,000 fellowship for a creative vision is nonexistent locally here for an individual artist.

Yet everything else about Denver, I love: the food, the breweries, the mountains, the backpacking, the dry climate, the sunshine, training at altitude, and the guy I met and fell in love with.

For starters, come check out [Colony 933], because I’ve invited all my favorite Colorado Creatives to participate. There are a few more favorites who couldn’t be part of the production, such as choreographer Gesel Mason, artistic director of Gesel Mason Performance Projects. Her creative inquiry is just as rigorous as her physical practice. I love how her rehearsals require the performers to be present and actively involved in the making of her work. Boulder artists Brooke McNamara, Ondine Geary and Lauren Beale keep me commuting the long RTD bus trip because they are brilliant performers and creators. Another is Kenzie Sitterud, who started at RedLine with me. Kenzie does large immersive environments, so I’m hoping we can link up soon to collaborate.

After [Colony 933], I want to start facilitating a mass net-weaving of the dance community. Using RedLine as an ally, I want to get in the room all the Denver city and arts funders alongside national funders, such as National Performance Network and New England Foundation for the Arts, to meet with Denver dance and performance artists to help elevate the Denver dance scene. It’s a long end game, but I think there are some significant steps we can take as a community to create communication platforms that support our work.

Creatively, I’m crossing my fingers that my collaborative group, XX, gets funding for our new work, Vagina Bunker. The project will offer pussy pocket survival kits and in-person initiations to transmit fuel and detailed instructions on how to prepare for our inevitable demise. Just in the infant stages right now, we plan to develop Vagina Bunker into a performance event to perform at RedLine while I’m in residence. 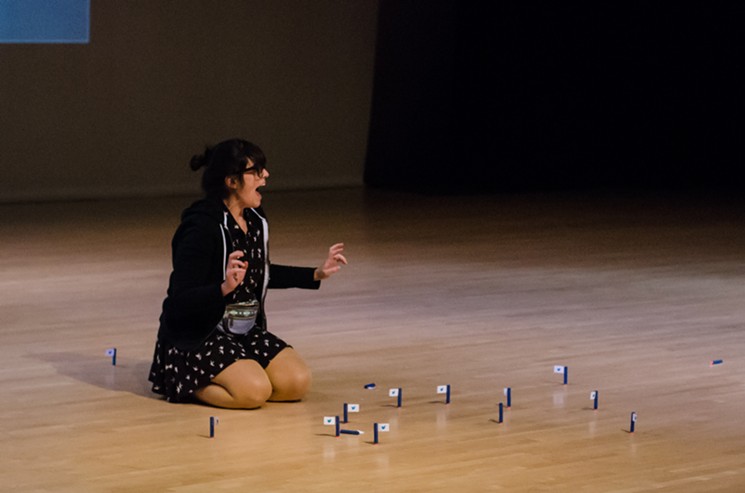 Catch Speer in #Tweets4Justice at RedLine’s 10X Artist-in-Residence exhibition opening night on February 2, 2018. Part comedy, part activism, and part technological spectacle, #Tweets4Justice is a TEDTalk given by Louise Giltner on how to use Twitter for social change.
Courtesy of J. Akiyama
Who do you think will get noticed in the local arts community in the coming year?

Denver local Lisa Engelken. She’s already making waves in the street-dance communities with her crew Nasty Kidz and a technical virtuosity that ranges from house to contemporary dance styles. And she’s an instigator. Her Backyard Sessions that take place in the back yard of her Uptown home draw on a range of performers and audience members. As we deal with the aftershocks of white-supremacy backlash and a gentrifying Denver, she’s attentive to what real inclusion and diversity look and act like.

Experience Kate Speer’s [Colony 933], an intimate, multidisciplinary immersive mystery event designed in collaboration with F.E. Toan, beginning at 7:30 p.m. Thursday, January 11, at Novo Coffee, 1700 East Sixth Avenue, and running Thursdays through Saturdays through January 20. Admission is $20 in advance online or $25 at the door.

Learn more about Kate Speer and her projects online.