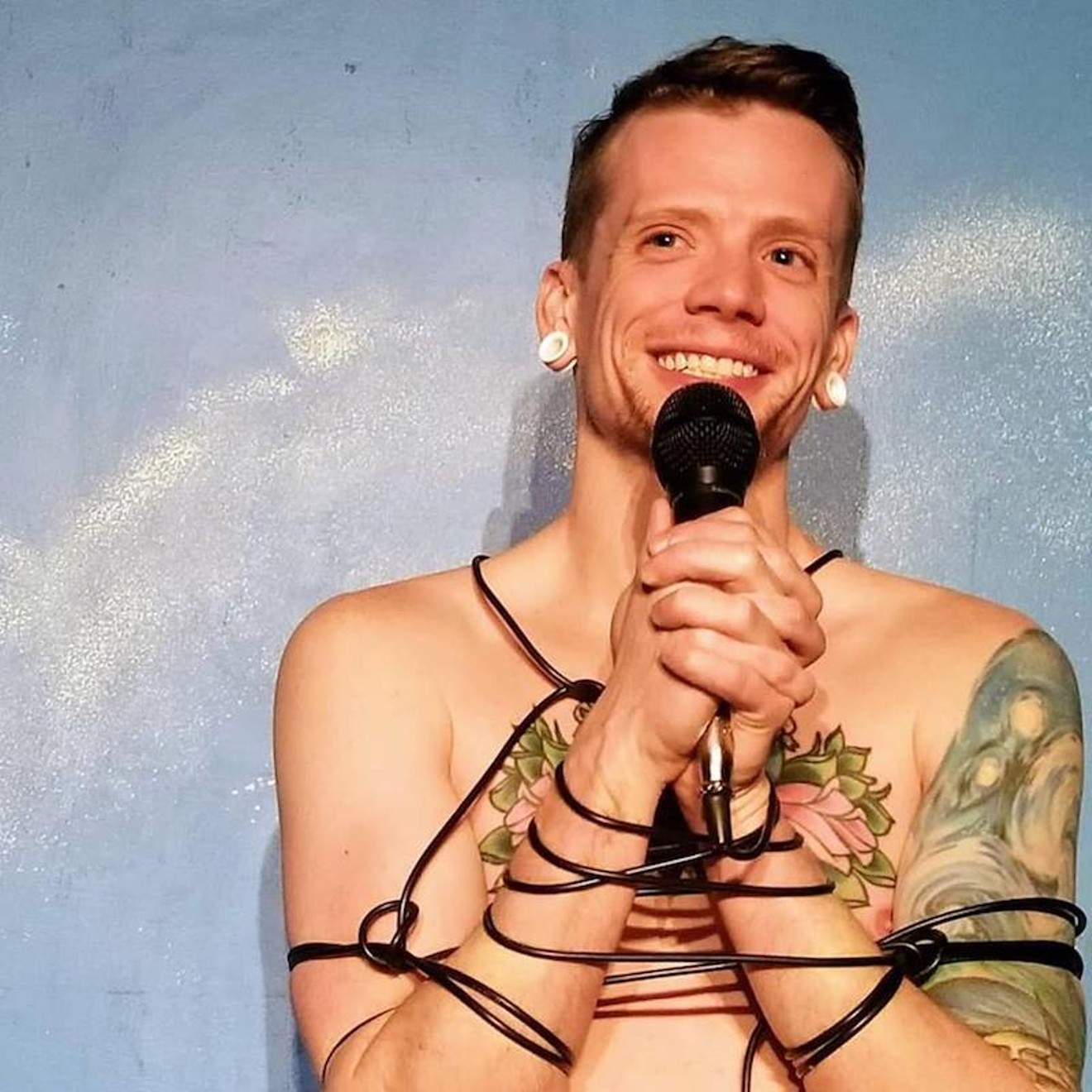 First Friday FÜKD Up Comedy & Kink host Chris Wellman. Winnie Winglewick
It doesn't take much imagination to run the average comedy show. Stick a PA system in the corner of a bar or brewery, hook up a microphone, round up a handful of comics and you're done. Most showrunners in Colorado adhere to these basics, but a few have adapted the comedy-show format into something more ambitious and innovative. Leading the pack: First Friday FÜKD Up Comedy & Kink.

Kink and comedy may seem like odd bedfellows, but great standups are uniquely adept at puncturing uncomfortable moments with laughter. At least most of the time. While some of the participating comedians Wellman has enlisted have thrived in the lusty atmosphere with their capably cracked jokes, Wellman says that nearly as many performers "clam up, and get all bashful" when they have to share the stage with semi-nude kinksters.

"It is supposed to be educational and silly, but almost always ends up being more funny than informative," he notes.

Wellman started First Friday FÜKD Up Comedy & Kink with the goal of "changing the perception and stigma of kinky people and other sexual minorities," and he's succeeded in creating a fun and friendly space for the widely misunderstood community.

Wellman found an ideal home for kinky comedy shenanigans at Denver's Dangerous Theatre, whose owner, Winnie Winglewick, was seeking to engage with the standup scene. "She reached out to me about hosting a show," Wellman remembers. "I pitched a kink-themed show where I would introduce vanilla comedians to all kinds of weird kink."

While most business owners would blush at such a prospect, Winglewick — to her credit — told him, "Whatever you're imagining, make it weirder." From there, the show took off, and its success has inspired Dangerous Theatre to pack its calendar with late-night comedy including theme shows like Sing Song Ding Dong, Wheel of Doom, and That's My Time.

"I don't think anyone has ever given me that kind of permission to do what I want before," Wellman says. When asked about his fondest memory from the show, he answers, "My favorite moment so far involved being almost naked and tied up by my wrists while a dom taught comedians to use impact toys on me. That one hurt. A lot."

FÜKD Up Comedy & Kink returns at 11 p.m. on Friday, September 6, to Dangerous Theatre, 2620 West Second Avenue. General admission is free, but donations are encouraged. Reserved table seating is $10 via Dangerous Theatre's TicketLeap page. Call 720-989-1764 or visit dangeroustheatre.com to find out more.
KEEP WESTWORD FREE... Since we started Westword, it has been defined as the free, independent voice of Denver, and we'd like to keep it that way. With local media under siege, it's more important than ever for us to rally support behind funding our local journalism. You can help by participating in our "I Support" program, allowing us to keep offering readers access to our incisive coverage of local news, food and culture with no paywalls.
Make a one-time donation today for as little as $1.