The current Clocktower Cabaret space will get a facelift in coming weeks. Clocktower Cabaret
Nestled underneath the Daniels & Fisher clocktower on the 16th Street Mall, the Clocktower Cabaret has offered vintage burlesque performances in a 1920s atmosphere for well over a decade. The pandemic forced the hidden venue to grapple with its future, but owners Jefferson and Selene Arca say the Denver staple is now ready to celebrate the "new" roaring ’20s.

While restrictions have lifted, Clocktower is holding to some lessons learned during the pandemic. Throughout the last two years, the team discovered that many of the COVID changes enhanced audience engagement. A limit of 100 guests per show will continue, and Clocktower is also sticking to its shorter, earlier programming. Shorter and more frequent shows not only allowed more to attend, but also increased comfort. The smaller crowd size allows for more breathing room and an intimate feel, better food and drink service and, most important, eliminates the need for guests to take limited/obstructed-view seats.

But there are some changes coming: To celebrate its sixteenth year in business, the venue will receive a facelift this spring, provided under the direction of none other than Lonnie Hanzon, who was the original designer of Clocktower.

"It's time to polish the old gal," says Hanzon. "It's time for a makeover."

The club opened in 2006 as Lannie's Clocktower Cabaret, named for then-co-owner Lannie Garrett, who stepped down in 2016. Hanzon's idea for the venue was maximalism, which he now considers a "very cheeky" term. Lush purples, blues and golds fill out the space, with minimal wooden tables and chairs next to velvet booths. It's a cross between the 1972 and 2001 films Cabaret and Moulin Rouge!, a connection Hanzon continually leans into. In his original research, he found that cabarets were historically never fancily decorated rooms, yet pop culture — particularly films — has romanticized the performance spaces. With Moulin Rouge! having been released just a few years prior, Hanzon ran with the romanticism and created a space he hoped would capture such dreamy escapism. 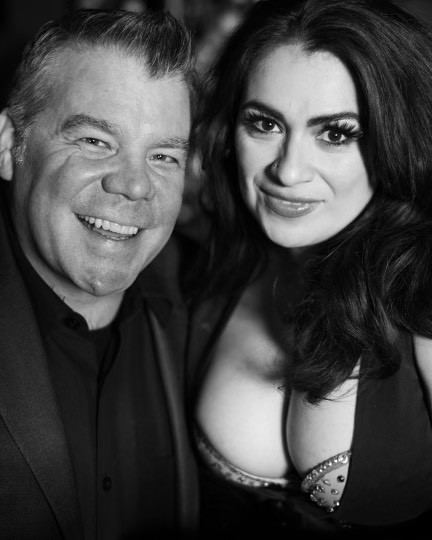 Jefferson and Selene Arca
Dave Woods Photography
Sixteen years later, he's concerning himself with refining, refocusing and reframing the story of the Clocktower space. Jefferson points to aspects that Hanzon himself has admitted aren't finished. The next few months will bring simplistic changes such as seating and light fixtures along with  more imposing renovations. An area of the stage previously used for seating and storage will be transformed into a mock-up of the venue's back stage area, with a classic Hollywood-style vanity for audience photo shoots. Such Instagrammable elements will provide added layers of immersion for guests.

"I call it classic, but really it's just theatrical," Hanzon adds. And theatricality is a priority now more than ever.

"People are looking for an escape," adds Selene. Since reopening last summer, Clocktower has reached pre-pandemic attendance levels and has also cultivated stronger relationships with its audience. More familiar faces recur in the crowds each evening, guests' drink orders and names are being memorized, and social media engagement is up. Some regular guests existed before the shutdown, but to the Arcas, the rise in such frequent visitors signals a growing importance of the venue as a space for adults to let go of inhibitions.

"The audience is little kids at Disneyland," Selene explains. But the appeal of the place doesn't just lie in escapism. Clocktower prides itself on body, racial, sexual and gender positivity and diversity — aspects that will increase as the venue allows more group performances. The solo-acts-only rule from the pandemic had pushed it toward Vaudeville-style performance, Jefferson recalls. Now the venue can safely return to its cabaret roots; live music has already returned, and multiple burlesque revues are following.

Sunday, March 20, will see the returning performance of CLUE: A Strip Search, an original theatrical production written by Jefferson that combines elements of the mystery board game, its film counterpart and a burlesque striptease. The inaugural performance happened in November 2019, just a few months before lockdown. Clocktower also recently signed with Denver-based group Circus Foundry to debut a new show, Cirque Noir, in May.

Luckily for audience members, Hanzon's redesign won't cause the venue to close. The incremental changes will happen around the performances. It's possible that renovations will wrap up before the arrival of Moulin Rouge! The Musical at the Denver Center for Performing Arts in June, allowing for a rare meeting of the inspiration and the inspired.

Clocktower Cabaret is downstairs at 1601 Arapahoe Street. For tickets and info, visit its website. For more on Lonnie Hanzon, visit his website.
KEEP WESTWORD FREE... Since we started Westword, it has been defined as the free, independent voice of Denver, and we'd like to keep it that way. With local media under siege, it's more important than ever for us to rally support behind funding our local journalism. You can help by participating in our "I Support" program, allowing us to keep offering readers access to our incisive coverage of local news, food and culture with no paywalls.
Make a one-time donation today for as little as $1.