Jim Janicek Is Making Family-Friendly Films About Colorado, in Colorado 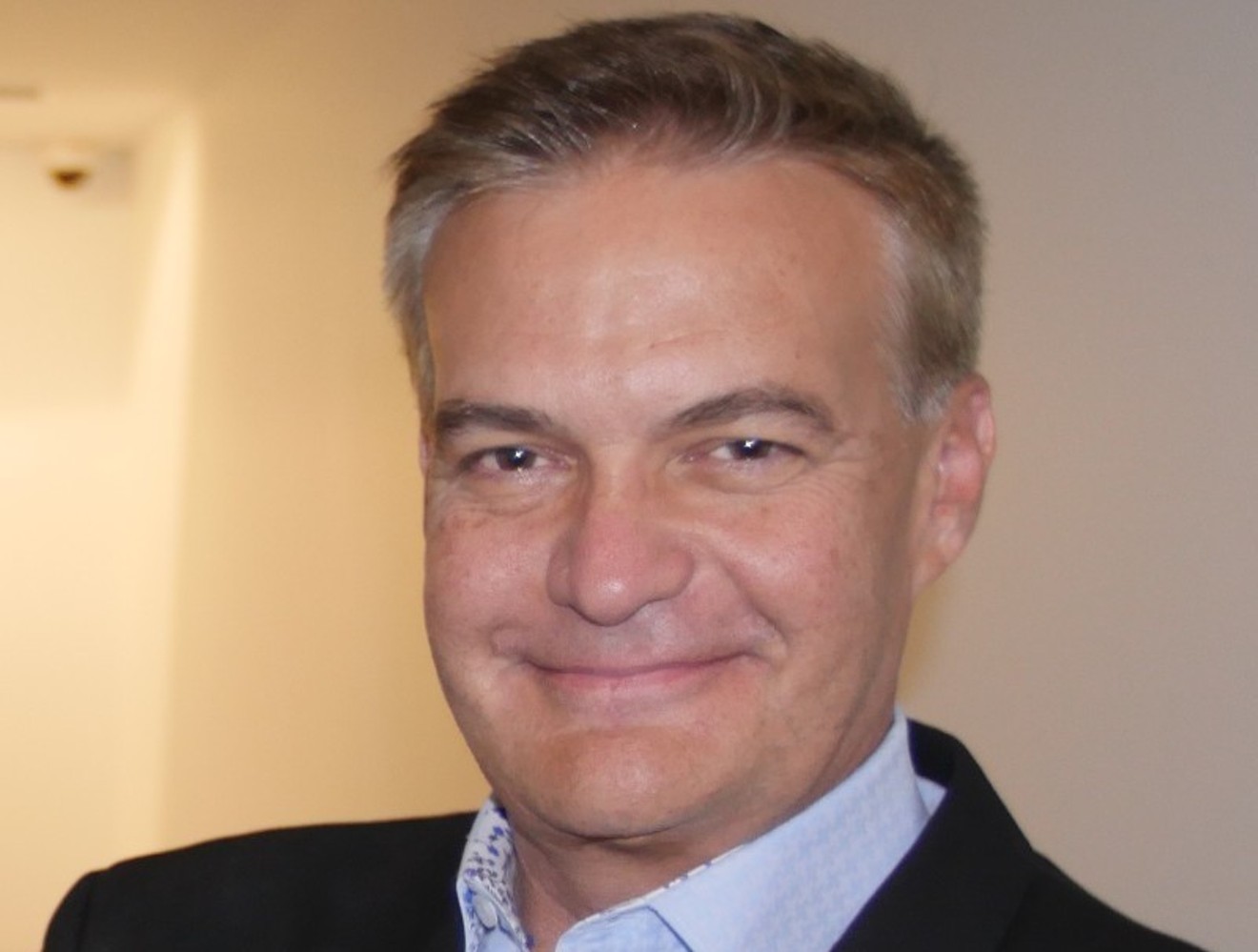 Jim Janicek is bringing a little Colorado to the movies Janicek Media
Colorful Colorado can get short shrift in films, even when the stories are based here. Think Day of the Dead, Red Dawn, even Citizen Kane: all set in Colorado and not a single frame shot here. The snubs extend to made-for-television movies and TV shows: The brilliant series Community — soon to be a movie as well — was supposedly set in a suburb of Denver, but the show didn’t even bother to digitally remove the palm trees from the Los Angeles City College campus where exteriors were shot.

But now Jim Janicek is helping to change all that.

Janicek was born in Colorado — Parker, to be exact — and went to high school in Douglas County, then on to Colorado State University. He started as a gofer for ABC right out of graduation. “I was just fetching doughnuts and coffee,” he recalls, “but it was great, because I was right there in the live truck for Monday Night Football and at the Olympics.” He worked his way up the ladder, and eventually found himself in L.A. doing on-air promotion, marketing and branding for ABC, when he was put in charge of Fridays and Saturdays. “Fridays were where TV shows went to die,” Janicek says, and laughs. “But we had these popcorn comedies, and I got this idea to rebrand Friday night.” 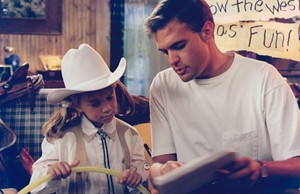 Janicek and one of the Olsen twins from the TGIF days.
Janicek Media
The idea for TGIF — Thank Goodness It’s Funny, for those not familiar with the TV juggernaut of the 1990s — really came from Janicek’s own childhood. “When I was a kid, on Sunday nights we’d gather as a family, with my cousins who lived a couple doors down, and watch Disney’s Sunday movie and Mutual of Omaha’s Wild Kingdom. It made for a whole night. I remember those warm feelings of family on those nights. It was special to me. That was what I was trying to re-create on Fridays. Full House, Family Matters, Step by Step, Perfect Strangers. We wanted viewers to recognize that as something they didn’t want to miss. Something they could share with their families.”

Janicek knew he was on to something big when ABC Research came back nine months in with Q-rating results that suggested that audiences were starting to recognize stars of those shows as being “that little girl from TGIF” instead of “Michelle from Full House.” He recalls that “this made Research panic, like they’d made a mistake. Thank God for Bob Iger, who said, ‘Wait, wait, wait…we’ve got a brand here.’ This was during the time of NBC’s Must See TV, and suddenly we had our own night of the week.”

Family ultimately brought Janicek back to Colorado, to help take care of his mother. He brought his work with him, founding his own production company, Janicek Media, which led to him bringing more of Colorado to his work, too.

Janicek has teamed up with writer Brian Bird, who has a home in Castle Rock, to produce films in Colorado. The two met by way of Colorado Film Commissioner Donald Zuckerman. All three are media powerhouses: Zuckerman most recently for his award-winning documentary Democracy vs. The Big Lie: The Truth Behind Mail-In Voting and Bird for Touched by an Angel and Hallmark’s When Calls the Heart, His involvement was key to a fast turnaround.

“Two months later, we were starting to film," Janicek recalls. And what were they filming? Family-friendly movies set in Colorado. He remembers something that filmmaker Garry Marshall used to say: When things get tough, people want to escape to a happy place. “And often, that place is their couch, with their family. And that’s where sitcom tends to bloom," he says.

And happy movies made for television.

Janicek and Bird were joined in the project by director Brandon Clark and fellow executive producer Larry Douglas of AMG, who helped "a huge deal" with crews and locations, Janicek says. 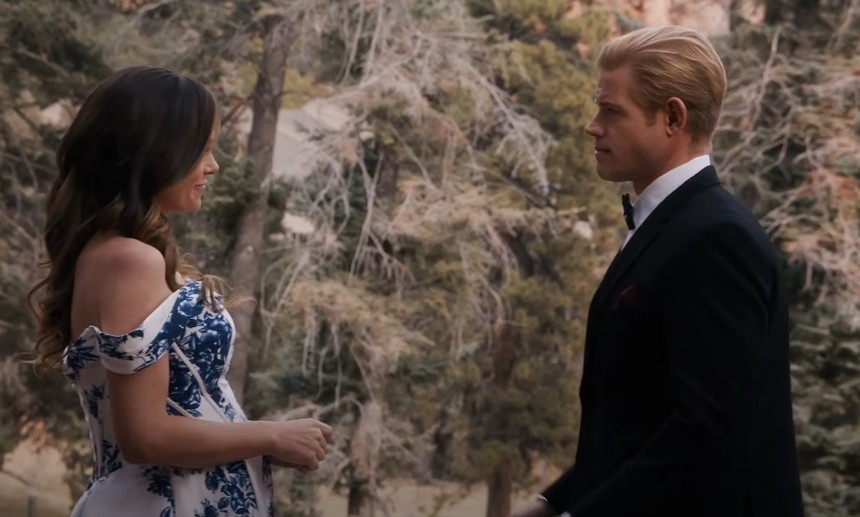 The Engagement Plot is love, Colorado style.
YouTube
The Engagement Plot is set both in Denver and the fictional rural Colorado town of Lark Springs; it follows Hannah and Will and their unconventional love story that starts on a reality-TV show. Hannah is a fifth-grade schoolteacher who lives with her widower dad; Will is a successful businessman who’s wondering if he’s taken a wrong turn in life. When Will breaks Hannah’s heart on national television, she returns home to small-town Colorado…and Will wonders if he’s made yet another mistake. Now streaming on UPtv, a basic cable channel that describes itself as featuring “faith-affirming and family-friendly entertainment anytime, anywhere," it’s wholesome and gentle and smile-inducing…and something you can watch with your daughter and grandmother at the same time and not wince even once.

“People love the idea of family,” says Janicek, “especially during harder economic times. There’s an even bigger craving for that.”

But while family values and references to faith play a role in The Engagement Plot and forthcoming Colorado projects — The Happy Camper, debuting soon, and Just Jake, now filming — they're not what the story is about; they’re part of the world in which that story is set. “We’re not looking to preach,” Janicek says. 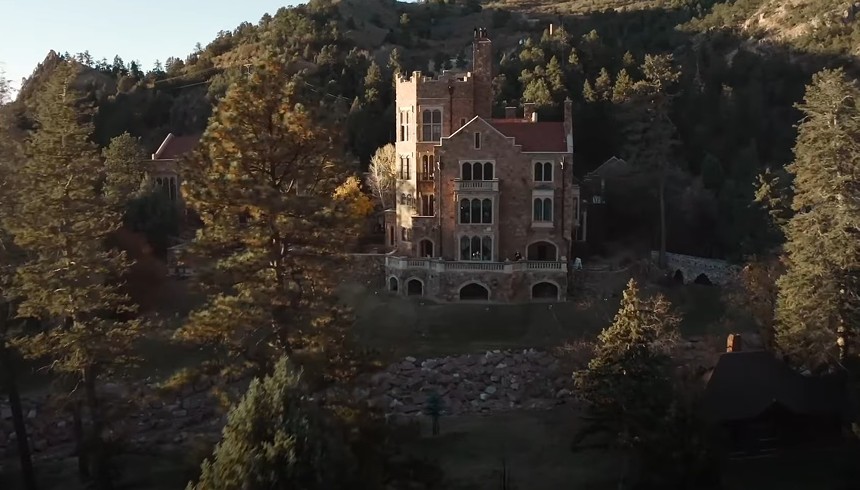 Glen Eyrie Castle makes a great movie setting.
YouTube
But they are looking to spotlight Colorado. The Engagement Plot isn’t just set in Colorado; it was almost entirely filmed in Colorado Springs, most notably in and around Garden of the Gods and Glen Eyrie Castle, but eagle-eyed residents will recognize certain businesses and other landmarks, as well. “Not enough people have been able to see Garden of the Gods,” says Janicek. “We have these beautiful settings. Things just worked out.”

Those things worked out in part because of film incentives that Janicek says will be instrumental to future Colorado projects.The Engagement Plot, The Happy Camper and Just Jake each received about $160,000 from the Colorado Office of Economic Development and Trade, which includes the Colorado Film Commission, approximately 20 percent of each film's total budget, most of which was spent in state. "The movies would not have been possible without the incentive. It really is why more films are starting to shoot more here in Colorado. It's the first thing a production unit looks for when they have a green light," Janicek says, noting that some surrounding states — he mentions New Mexico, Utah and Wyoming, specifically — have more lucrative incentive programs.

“The Pandora’s box has been opened,” Janicek says. “It doesn’t matter where you’re based — Canada, New York, Chicago, L.A. — you’re looking for film incentives. Not because it’s money in your pocket, but because it allows you to put that money back into production itself. So you can hire local crew and pay them fair rates. And then in turn, that money goes right back into Colorado, because that crew lives right here. It’s a smart program.”

He, Bird and Zuckerman and his team at the Colorado Film Commission hope that projects like The Engagement Plot are only the start of more to come.

There's so much left to share, Janicek says, citing an old lesson from a mastermind of creative development that people don’t know what they like…but they like what they know. And what they know is getting together with family. “Life is good. Family is good. Don’t lose hope,” Janicek says. “There’s a great world out there, with a lot of really good people. That’s what I want to promote.”

The Engagement Plot is available now on UPtv; for more on Janicek Media, see its website.
KEEP WESTWORD FREE... Since we started Westword, it has been defined as the free, independent voice of Denver, and we'd like to keep it that way. With local media under siege, it's more important than ever for us to rally support behind funding our local journalism. You can help by participating in our "I Support" program, allowing us to keep offering readers access to our incisive coverage of local news, food and culture with no paywalls.
Make a one-time donation today for as little as $1.