Keep Your Eye on the Ball: Lonnie Hanzon Cries Foul on Colorado Rockies 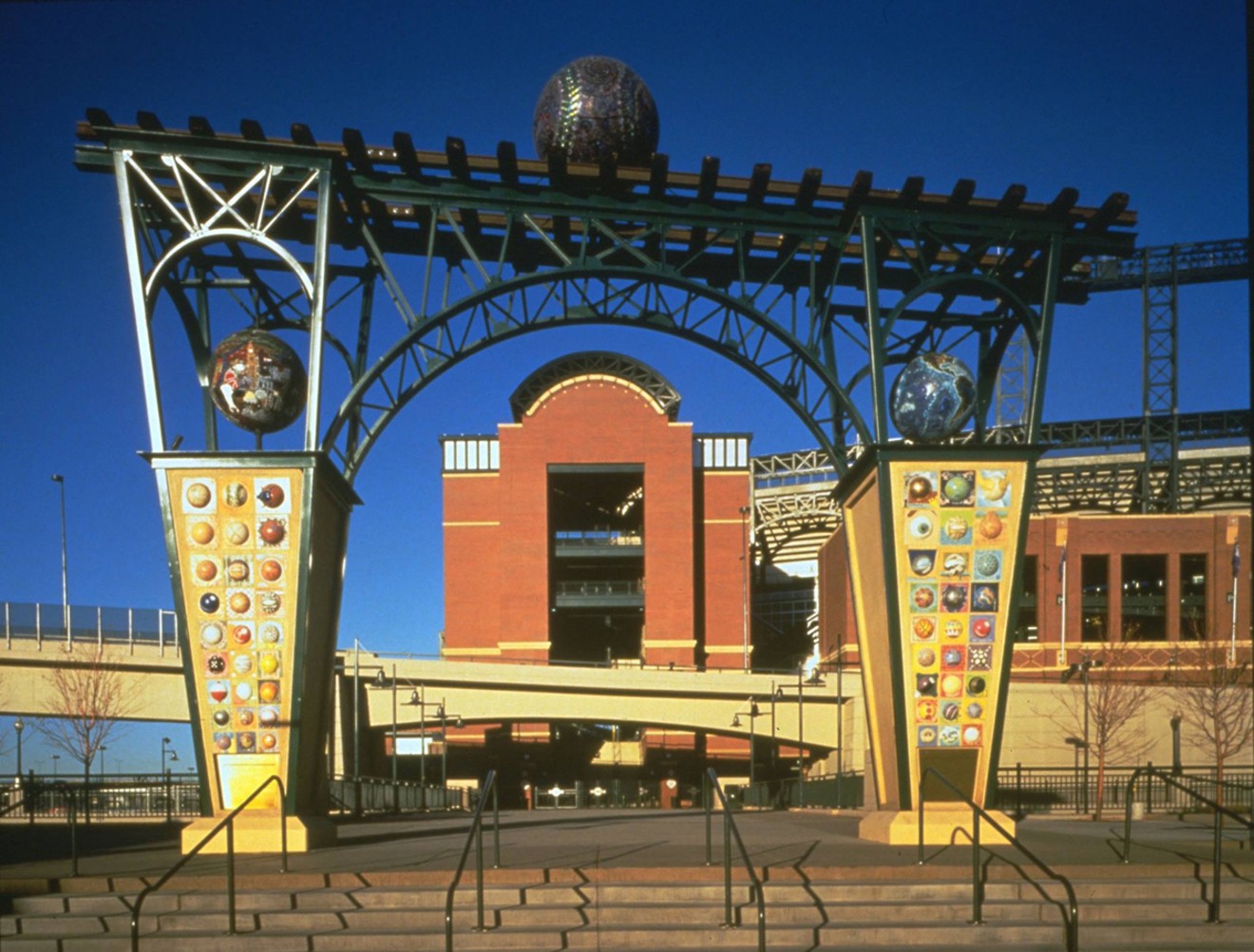 “The Evolution of the Ball” could be an endangered piece of public art. Courtesy of Lonnie E. Hanzon
The path to Coors Field was paved with good intentions.

Back in 1994, the year after the brand-spanking-new Colorado Rockies played their first game at the old Mile High Stadium, thousands of baseballs fans paid $75 each to have their names inscribed on bricks that would be placed along what would become Wynkoop Plaza leading to Coors Field, the team’s own brick ballpark in a then-dusty part of downtown. The Denver Metropolitan Major League Baseball Stadium District, which oversaw the construction of Coors Field with taxpayer funds, raised another $650,000 for public art through the sale of the personalized bricks.

The walkway was ready by opening day at Coors Field in 1995, the bricks set in the shape of a miniature baseball diamond, with some of the town’s heaviest hitters, including team owners, within spitting distance of the miniature home plate...not because of any preferential treatment, mind you, but just because they bought the bricks first. But the real MVP of this collection was the giant arch that created a true gateway to the ballpark ahead: “The Evolution of the Ball,” by Denver artist Lonnie Hanzon.
While the team’s performance has earned mixed reviews, the ballpark’s public art program won raves from the start; Rocky Mountain News critic Mary Chandler called it a “grand slam.” And Coors Field itself was such a hit that development has sprung up all around it. Today there’s not a single dusty, unclaimed spot left in LoDo, the blocks around Union Station or all the way to the Platte.

The Colorado Rockies Baseball Club, owner of the team, wanted to get in on the development game, too: Last year the Rockies, as the ownership group is also called, signed a 99-year, $125 million lease that will keep the team playing at Coors Field through 2047, and at the same time let the Rockies develop a prime piece of stadium district property known as the West Lot, just southwest of the ballpark between 19th and 20th streets, from Wazee past Wynkoop Plaza, the pedestrian walkway designed to welcome fans to the new ballpark in what was then a no-man’s-land. 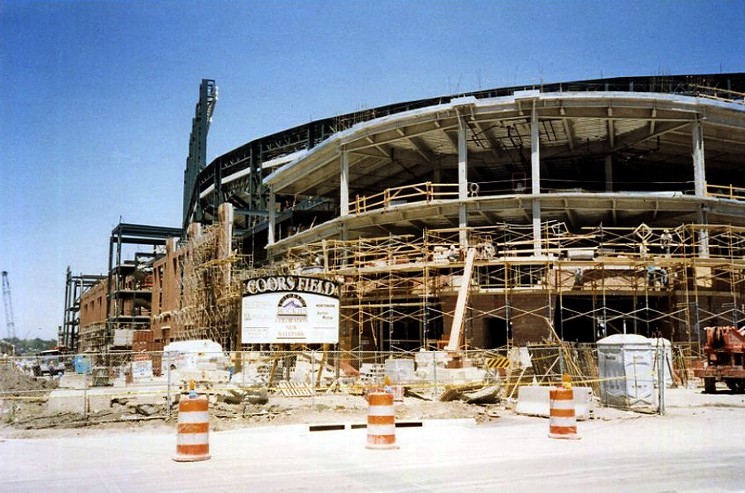 Coors Field under construction in 1994.
Jonathan Shikes
In March, the Rockies and its architectural design firm, Stantec, submitted a plan to the city that would add nearly 830,000 square feet of development to LoDo. Actually, not quite LoDo: This block was not included in the Lower Downtown Historic District, which means it also does not fall within the strict LoDo height restrictions, so in the plan, one building soars to eleven stories and the other to thirteen. They’ll hold 114 condos, an underground parking garage, a hotel, offices, bars, restaurants, retail space, and a 34,015-square-foot hall of fame and event space. In the center will be a plaza designed as a community gathering place, much as Wynkoop Plaza is today…though the Rockies liken this new space to Rockefeller Plaza.

And Wynkoop Plaza? The Rockies envisioned it as more of a park, but then decided the balls and bricks were outta there after finding out that the project needed a fire lane in that spot.

That has Hanzon very, very hot. Over two decades ago, Hanzon received a $115,000 commission to create the 32-by-42-foot piece, a sculpture created of ceramics and steel and a lot of community love, as various artists helped him with the project that took over a year to complete. “One hundred and thirty people worked on that sculpture,” he recalls. “It was my first public art piece ever, my most inspired piece, ever.” It's also his most-loved (which is saying a lot, since Hanzon is responsible for projects ranging from the design of the Wizard's Chest to the Houston Zoo Lights). The ball-bedecked top was designed to draw the eye up to the angles of Coors Field and away from the caverns of 20th Street; the support columns consisted of 108 glazed, three-dimensional tiles depicting balls of every type, from oddball to eyeball to wrecking ball to debutante ball to eight-ball. 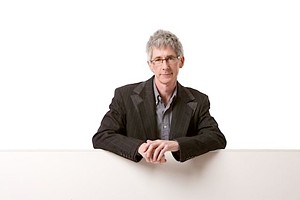 Artist Lonnie Hanzon.
courtesy Lonnie Hanzon
Looking at early schematics released after the Rockies project was announced last December, Hanzon didn’t see “The Evolution of the Ball.” He contacted a lawyer, the lawyer contacted the stadium district, and while discussions seemed stalled, fans of the piece who attended community meetings with the Rockies told Hanzon that they were assured it would stay put.

But concerns were raised at the March 19 stadium district meeting. “There was considerable discussion regarding the Wynkoop Walkway,” the minutes of that meeting read. “In developing the plans for the Wynkoop Walkway, two issues have arisen….One is that the fire department has concerns about ‘The Evolution of the Ball’ artwork and its effect on access and emergency response. The second issue is how to preserve the bricks that are currently in place in the Wynkoop Walkway.”

Craig Umbaugh, stadium district counsel, noted that while the district had paid for “The Evolution of the Ball,” the national Visual Artists Rights Act provides an artist with certain notices and rights. In response, Hal Roth, the Rockies chief financial officer and chief legal officer, responded that the Rockies just wanted the district board to be aware of the issues and did not have a specific proposal at the time.

On June 1, the stadium district submitted its rezoning request to the city. “The Rezoning provides important design standards and guidelines and private open space requirements that will bring the Property closer to conformance with the neighborhood and adjacent Historic District,” the document reads, “and will allow for redevelopment of an iconic mixed-use project with attention to Wynkoop Plaza, as envisioned by all for the City’s adopted plans for this site.”

Well, perhaps not all. When Hanzon saw a revised plan three weeks ago, he cried foul. “The Evolution of the Ball,” as well as all of the bricks bought by fans, had been moved up to the walkway along 20th Street, just outside of the ballpark. “It’s too big for the space, the orientation is wrong,” he says, adding that he would have told the planners that if they’d asked. And he would have happily suggested other options earlier, so that they could be incorporated in the design.

“They can move it,” he adds, “but they need to do it with integrity.” If, that is, they can move it at all. “The Evolution of the Ball” is constructed from many pieces, including some balls so large they had to be created nearby (in an empty warehouse that now houses the Milk Market) and rolled to the site. Barry Rose did all the delicate terra cotta work.

In case a new spot can’t be found, in case the piece can’t be moved, the Hanzon Foundation created a “Save Evolution of the Ball” Facebook group, soliciting suggestions and the promise of funds for legal battles ahead. But Hanzon also reached out to the stadium district, which arranged a July 30 meeting between the artist and the Rockies, including lawyer Roth and Allyson Gutierrez, senior director of engineering and facilities for the team.

The West Lot design revealed in November 2017.
Stantec
While the discussion didn’t exactly strike out, it didn’t score, either. “We went in prepared to see a presentation of where else they had tried to move it,” Hanzon remembers. “And there wasn’t one.”

Instead, he says, the Rockies reps explained that they hadn’t talked to him about options a year ago, hadn’t looked at options a few months ago, because they’d thought “The Evolution of the Ball” and the bricks could stay, and had only learned a few weeks ago that the city was requiring a fire lane that would force the removal of both the sculpture and the bricks. They argued that they had come up with the best alternative.

Hanzon vehemently disagreed. Why not just try moving it back twelve feet, so that the angle was still correct? Why not put it right at the entrance at Blake and 20th streets, replacing the bronze of Branch Rickey there now? While the Rockies say the move of the bricks to 20th Street is set (they'll be replaced in the same order, complete with the words to "Take Me Out to the Ballgame" around them), the meeting ended with Gutierrez promising to look for other possibilities for "The Evolution of the Ball." 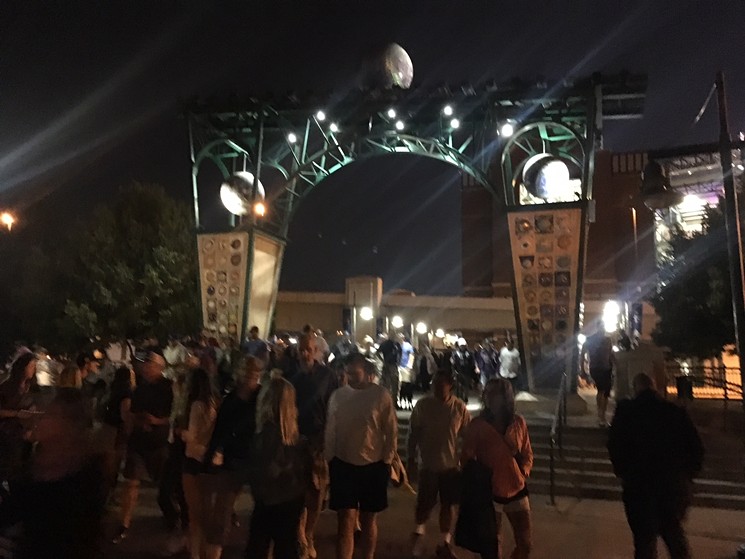 Coors Field crowd passing "The Evolution of the Ball" on July 27.
Westword
The stadium district is hoping she’ll find one that scores with the artist. “We’re working with Lonnie and will continue to, to see if there’s a mutually agreeable solution to this,” says spokesman Matt Sugar. “It’s reached almost iconic status over time, and we want to preserve it.”

But while the stadium district commissioned the piece and owns it, the Rockies get to call the play. And, says Hanzon, “They seem to be in a big hurry right now.”

Where’s the fire? For that matter, where’s the need for a fire lane? “The Rockies’ project is continuing to move through development review,” reports Laura Swartz, Denver Community Planning and Development marketing communication specialist. “I’ve spoken with Denver Fire, and they have not asked the Rockies to relocate the pavers or the sculpture. The fire lane being used for the new development is actually an existing fire lane and has no bearing on the pavers/sculpture.”

Sugar disputes that, and is checking back with the city for clarification.

As for the Rockies? Keep your eye on the ball!
KEEP WESTWORD FREE... Since we started Westword, it has been defined as the free, independent voice of Denver, and we'd like to keep it that way. With local media under siege, it's more important than ever for us to rally support behind funding our local journalism. You can help by participating in our "I Support" program, allowing us to keep offering readers access to our incisive coverage of local news, food and culture with no paywalls.
Make a one-time donation today for as little as $1.