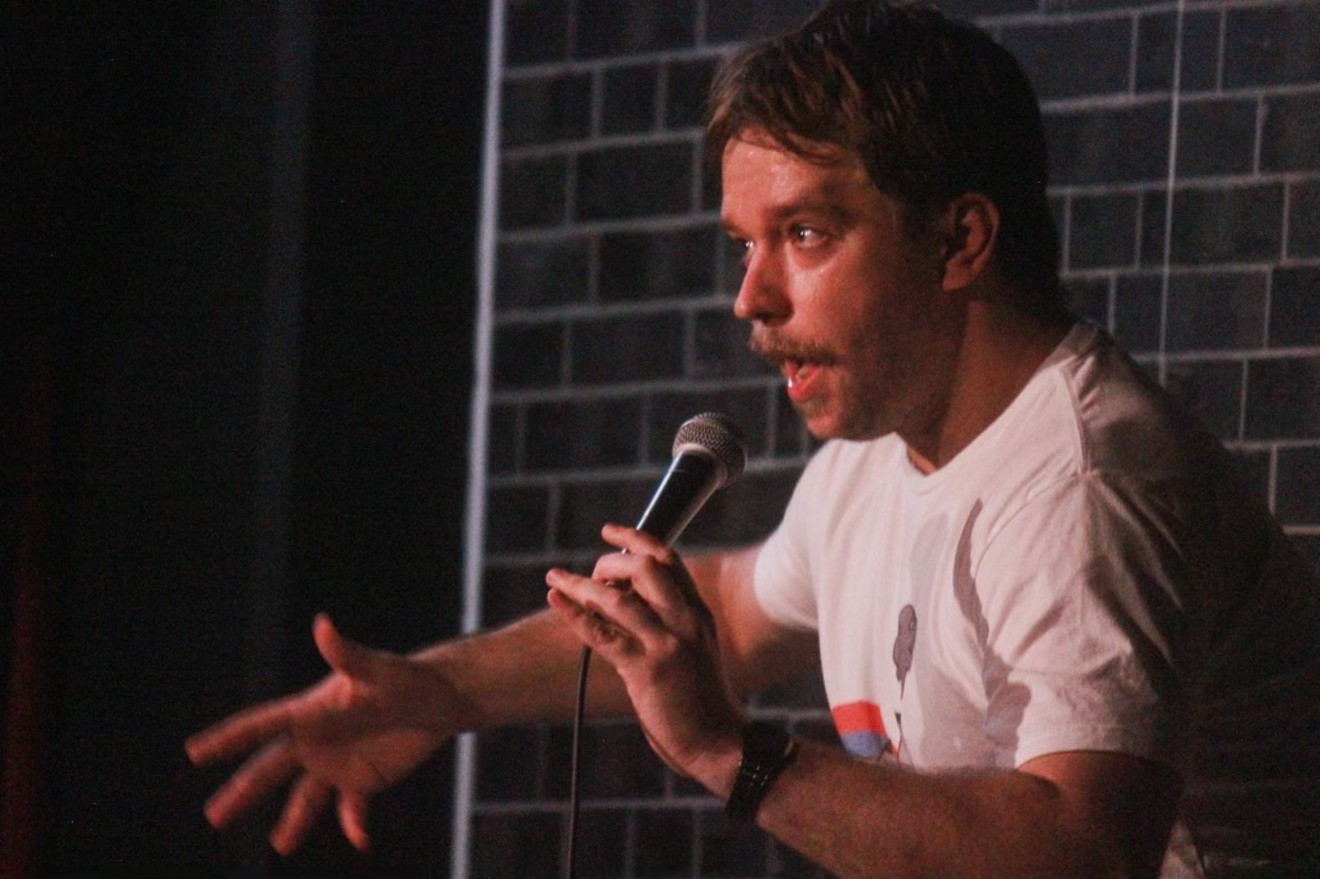 Bryant founded DCU in 2019 as a series of comedy shows in the back room of the Irish Snug, which has since closed down. After performing outdoor shows on Colfax during the pandemic, he found a new, permanent venue for DCU, but ticket sales were sparse. The club was in the red when Bryant stumbled across a video game on Facebook Marketplace that caught his attention. “It was a sealed Nintendo first-edition Super Mario game,” he recalls, and he purchased it for $800. With an ensuing combination of shrewdness and luck, he sold it on eBay for ten times that amount. That windfall became his operating budget to keep the business running until ticket sales increased. Jesse Greene
DCU is truly underground, beneath the Althea Center, a non-denominational church that celebrated its 100-year anniversary last month. The focus of the classical revival-style building is its rounded colonnade corner entryway that stands out in the Cap Hill neighborhood like a sore thumb — if a sore thumb was a prominent National Register Landmark designed and built by prestigious American architect Jacques Benedict.

Bryant says he reached out to the Althea Center because he knew it held improv and theater shows in its basement. The owners agreed on a lease, and it's been a huge upgrade for Bryant, who was glad to leave the Irish bar. “Now I rent from spiritual people who help the homeless,” he remarks.

Departing the real world, you enter the black-box theater down a steep stairway. The room is dimly lit and slightly chilly; the ceiling is low and black. Backing the stage is a dark-brick backdrop framed by red theater curtains. The venue seats 120 — the majority in plush pew theater seats, the rest at tables draped with red tablecloths.

The lounge area offers drinks for sale, though without the two-item minimum that most comedy clubs require. “The only people I’m indebted to are the audience and the comics,” Bryant says, differentiating his independent comedy club from other venues that are responsible for dozens of employees and corporate reporting. “I want to keep comedy accessible, so price isn’t a barrier,” he explains. “I just need to make enough to keep my pug fed.”

Low overhead allows for flexibility. In addition to standup shows, DCU now offers acting classes, and improv classes are in future plans. Bryant is never short of new entertainment ideas. “If I wanted,” he says, “I could have a Wednesday pie-eating contest in here.”

At eighteen, as a student at UNC Greeley, Bryant took the stage for the first time and told a Wikipedia joke. Admittedly not his finest work, but he says there wasn’t much else to do in his free time, so he kept writing and performing. “I need to be myself more than I need standup,” Bryant says. “Standup just happens to be one of the best vehicles for that.”

Ten years later, on stage at DCU, his material seesaws between silliness and intelligence while he thinks aloud rapidly in analogies. A Fruity Pebbles joke told in a Barney Rubble accent is followed by reflections on empathy and feminism. His expressive face strategically contorts to heighten an idea or punchline. He rolls his right shoulder because, he says, his shirts don’t fit correctly on that side. He’ll often raise an open hand to the side of his mouth and lean in to finish a joke, as if he’s letting you in on a secret.

Bryant’s thought process is a display of force, not a display of focus. Off stage, he seamlessly jumps into a John Mulaney or George Carlin impression to make a point about the singular personality or perspective of our favorite comedians. “I dabble in too much shit to have a singular focus, which is a bad thing for this generation,” he says. “They think you need a thing.” His mind wanders like he’s waiting for the recess bell to ring, pacing, improvising from one idea to the next, just as the word "RIFF" tattooed on his collarbone implies. “Yes, he’s a little scattered,” comments Bryant's friend, comedian Andie Main, “but he operates with kindness in the front of every interaction.”

One moment he’s contemplating the racial bias he sees in ticket sales, and the next he’s critiquing the economics of tennis. He’ll dissect the different types of laughter, referring to the rational and irrational, the thinking part of the brain and how your body reacts physically to a joke. He considers sunk-cost fallacy as he scrolls through his phone looking for a photo that he can’t find, then apologizes for rambling because he’s trying out new psych medication, which he strongly encourages.

But after more than a decade of standup, Bryant says he’s not even at the starting line for his career. He has plans for his own special, his own tour and more writing credits. “I want all the beautiful things in this world," he says, "but it’s hard to call myself ambitious when I know how many naps I take.”

Bryant is noticeably aware that a certain environment is needed to support laughter. Standing beside the stage, he snaps his finger to point out the echo in the room, a crucial ingredient for any comedy venue. But the fragility of a comedy room means that the comics on stage can hear everything, good and bad. “At a rock concert, you can basically throw a beer bottle at the guitarist,” Bryant jokes, “but if you set your glass down too quickly at a comedy show, the comedian has to address it.”

New York and Chicago work well for comedy because of how the cities were built — both had thousands of speakeasies with hidden back rooms. “Those rooms are perfect for comedy because they’re isolated, which lends itself well acoustically,” Bryant explains. He notes that such rooms are harder to come by in this region, but he has the solution for Colorado, however unrealistic: Every brewery in the state should lower its ceiling by ten feet. “That’d be my dream mandate as governor.”

Bryant's phone vibrates often. People wanting tickets and comics wanting stage time. Agents and sponsors, too, jousting for his attention. He curates and organizes the lineup every weekend using time-tested wisdom to decide who will perform: “They have to be good," he says, "and off stage, they can’t be a piece of shit.” Having credits — an accolade that involves a recognizable media appearance — helps, too.

It’s a milestone for many comedians to get on the DCU stage. Gabby Gutierrez-Reed says she felt validated the first time she performed in the basement. “It’s like I’m doing something right,” she says of the experience.

Bryant’s friends describe him as someone raised by comedy and still a student, intense but silly, obsessed with quality and judo. They say he’s humble and diplomatic, too, never playing to the hierarchy of comedy that’s all too common. “Ben books comics by their ability,” Main says, “not who they’re friends with.”

He begins each day by giving the gift of kindness: He feeds his dog, Mochi. He ends his days with a responsibility for over 100 paying customers. They’ve purchased tickets to a church basement and agreed to put their phones away for ninety minutes and give their undivided attention. “That’s insane,” Bryant says, “and I want to respect that gift the audience is giving us.”

Over the past fourteen months in the space, Bryant’s immense effort in establishing DCU as a premier comedy venue has been undeniable. “Whoever thought you could take a church basement,” says Main, “and turn it into one of the most consistently packed venues in Denver?”

Denver Comedy Underground shows are every Friday and Saturday at 8 and 10 p.m. at 1400 Williams Street. Tickets are $15 at denvercomedyunderground.com.
KEEP WESTWORD FREE... Since we started Westword, it has been defined as the free, independent voice of Denver, and we'd like to keep it that way. With local media under siege, it's more important than ever for us to rally support behind funding our local journalism. You can help by participating in our "I Support" program, allowing us to keep offering readers access to our incisive coverage of local news, food and culture with no paywalls.
Make a one-time donation today for as little as $1.