Even Behind Bars, Creativity Can Break Free 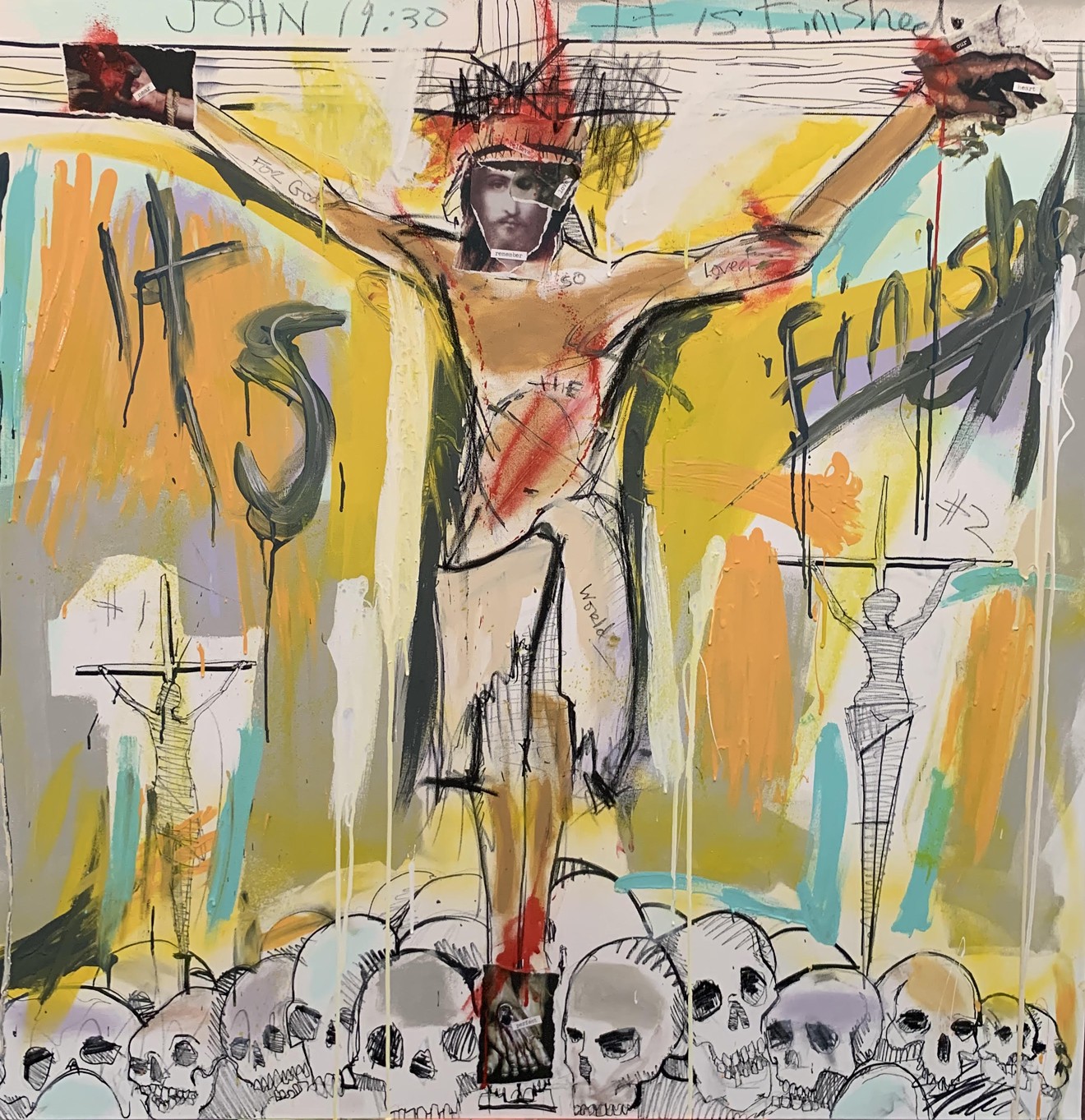 "It Is Finished," a collaboration between Justin Reddick and Matte Refic. Justin Reddick
Creativity is breaking out at the Federal Correctional Complex in Florence. Inspired by successful Colorado prison programs, local artist-turned-prison-art facilitator Justin Reddick introduced the Creative Arts Platform there in 2016; while inmates have long worked on their own to create art, CAP is the first formal program of its kind in a federal facility.

Working with other prison officials as well as Pueblo street artist Mathew Taylor (Matte Refic), Reddick introduces inmates to art history, helps them create their own art, then exposes them to creative industries. And also to the general public, through a show last summer at the Fremont Center for the Arts in Cañon City and with Brokenhood: The Art of Healing Through Community, an exhibit of art created by ADX Supermax inmates, Reddick and CAP colleagues that opens March 12 at Denver Seminary.

At the opening reception, 65 pieces will be available in a cash-and-carry sale; there will be live painting, and Reddick and Matte Refic will discuss the CAP program. “Brokenhood showcases the radical struggle that people took together, moving from sorrow to joy through their kinship and their shared love of the arts,” Reddick explains. “It offers a mature body of work that centers on the broken aspects of humanity, personal triumph, and the intense hope that resides between the bars of incarceration.” 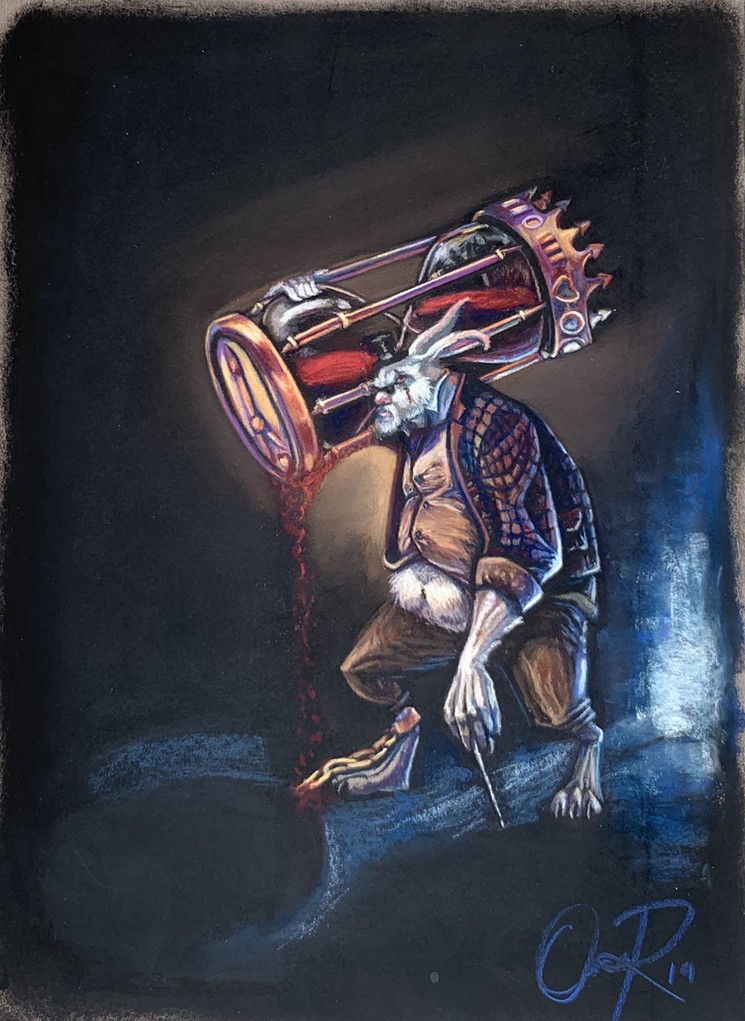 Imagine walking in my shoes. The clock is stuck broken, full of nothing but time…the more I carry my time, the heavier the clock gets…yet I refuse to put it down. I would rather get a cane to support myself then to drop the clock.

I have nowhere to go. Nowhere to hide. I cannot see, nor plan my future through the dark glasses. Like the rabbit, I hop from one hole to another. A gentlemen when I want to be…but I will always be me.

I have no control over my time…

Like an animal, my schedules are simply meals. My once brown fur is now turning white. People are moving on…forgetting about you—except for time. But there’s always a bit of light—hope…you never lose hope.

Engulfed by darkness…with the burden of time…the colors are touched by black.


Reddick just started a new class with twelve students in Florence last week; in advance of the opening of Brokenhood, he provided Denver Seminary with these thoughts about his inspiration for CAP and its work with inmates:

Justin Reddick: In the summer of 1999, I moved out of my childhood home of Littleton and moved to Fort Collins to embark on what I assume most nineteen-year-old kids do: an attempt at self-discovery. Somewhere along the way on my path toward adulthood, I had what can only be described as a true moment of clarity — an encounter with God, if you will. Guided purely by the events that occurred that afternoon, I went down to the local art store and purchased $72 worth of art supplies and began unpacking my creative blueprint. I went on to spend the next four years learning how to create and paint my emotions, engulfing myself in the process with relentless endurance.

In the summer of 2004, I moved south to Pueblo West, where I continued to evolve in my work and studies. For the remainder of that decade, I showed professionally all throughout the Pueblo area, making a local name as one of the up-and-coming aspiring artists. In 2010, I earned a Bachelor of Fine Arts degree with an emphasis in painting from Colorado State University-Pueblo. In the fall of the same year, I had an audacious encounter with the personal Triune God, eventually leading to my salvation through Christ. As a result of being exposed to such radical forgiveness, while my artwork had always dealt with the brokenness of life, my desire to tell “my story” slowly dissolved into a need to help others tell theirs. 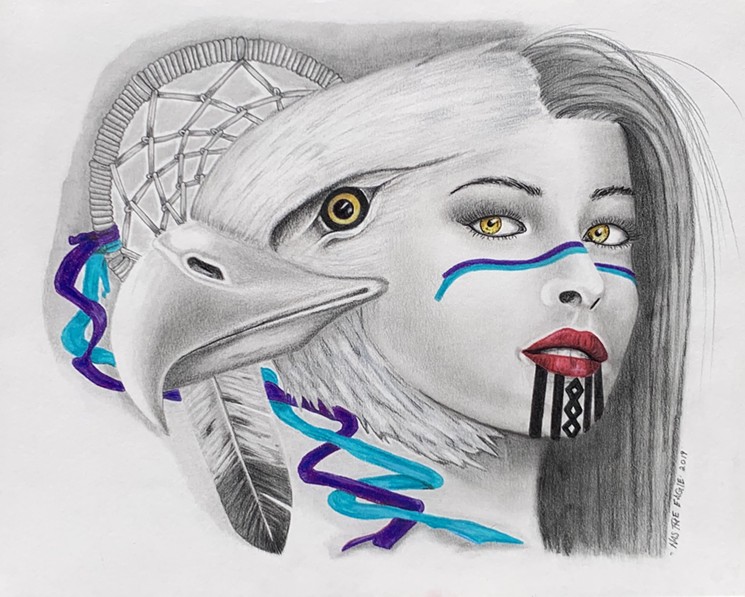 “Dream Catcher,” by Has the Eagle.
courtesy of Justin Reddick
Tell us about the Creative Arts Platform that you’ve implemented in the federal prison system. How have you championed the need for this program, and what has that process been like?

Within a prison environment, inmates have historically gone to great lengths to create artwork as a way to focus on something other than their surroundings, as well as to create a safer setting for themselves. But effort to produce quality and meaningful artwork has almost been entirely inmate-led within most prisons in America. As a result, I conceptualized CAP as a means to a new platform: giving those without voices a place at the creative-industry table, if you will. After three years of conceptualizing and rigorous self-promotion, I was given my shot to introduce the program to inmates at FCC Florence in the spring of 2016. With such a moment also came my descent into neighborliness— this notion of giving up painting my story and replacing it with the prison, which became my blank canvas, in a way. The platform initially had no budget, and inmates had to use items they found in their housing units to complete their projects. But after a CAP graduation and community art show in 2018, executive staff caught the vision and the program began to expand. CAP now functions as a grassroots art program that challenges inmates through a selection of re-entry initiatives, non-traditional programming techniques, and a variety of community outreach opportunities — such as this very show!

CAP introduces inmates to art history, invites them to create their own art, and exposes them to creative industries. How do you see these artistic opportunities transforming lives around you?

CAP has been a saving grace for those who have had the opportunity to enroll in it, because it is a highly personal experience for our participants. Unlike most programming tactics that seek to become successful through mass-producing a product that can be easily multiplied, CAP is only successful because of the selfless facilitators who have dedicated themselves to helping these inmates re-frame their broken stories. This tactic is highly personal, because once the inmate discovers what area of interest to pursue as a career, trade or hobby, the team of facilitators then helps each participant focus their creative energy in a positive way toward a more specific artistic direction and/or new creative identity.

A self-help packet cannot teach the value of human touch. We pride ourselves on enlisting local members of our creative arts community as key volunteers to the program. This allows us to promote the program, showcase talent and inspire the inmate artists to create high-quality work from the likes of professionals. Stripped of most postmodern societal norms that tend to dominate most secular art circles, with CAP we simply create because all humans have been called to do so. In this space, inmates can strive to find acceptance and forgiveness in self and the world through communicative creative exploration. 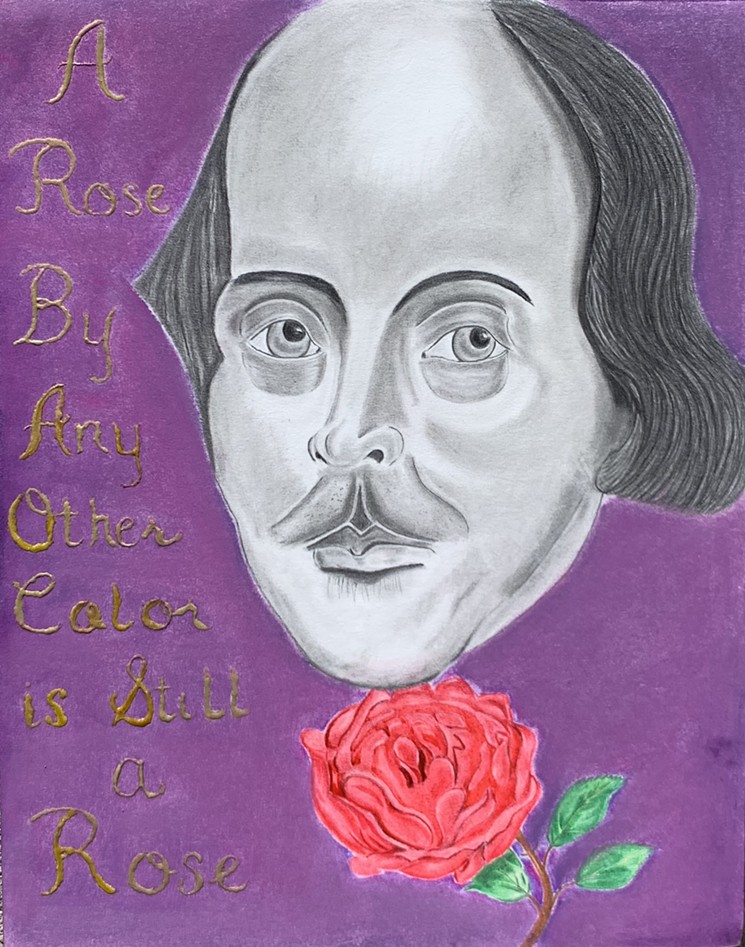 "Shakespeare," by Ed McDonald.
courtesy of Justin Reddick
In turn, how has this work changed you and challenged you over time?

At my most human, developing CAP has been, at times, a difficult undertaking. That said, I do not know where the program would be had I not had the unwavering support of the executive staff here at FCC Florence over the last few years. Working on this program has taught me the value of teamwork, and that if enough people come behind an idea, anything is possible. For that, I say thank you to my BOP family! But in my most holy of moments, I recognize that CAP remains to be what I believe is my great commission to social and progressive change on this side of eternity. Regardless of how long I get to sustain this program, I will forever consider myself blessed to have been given this opportunity. With that, CAP has taught me more about kinship and community than any other project I have ever been a part of, both because of the inmate participants and the support from my BOP executives.

As you engage inmates through this program, what is it about art, beauty and creativity that seem to provide an avenue for spiritual redemption?

For me, this show represents my effort to love a better way because He first loved us. From the moment God ordained me to hold a paintbrush, my story has always been about redeeming my brokenness and framing my narrative around a larger community. Art can be a sanctified act, one that is best experienced where two or more gather. Beauty is far more than a social construct; it is a Biblical doctrine that should be worked out alongside the more broken parts of the world. My work inside of the federal prison has challenged me to look at some of the uglier sides of humanity in an effort to ask myself if I belong to the same group of people. Not only did I rediscover that we do indeed all belong with one another, but I also came to better appreciate that we all share a deeper desire to be known in the midst of our suffering, and within that desire, a likeness and a responsibility to help transform one another’s lives if given the opportunity to share in such a sacred space.

Brokenhood: The Art of Healing Through Community is such a chance. This art exhibit showcases the radical struggle that people took together, moving from sorrow to joy both through their kinship and through their shared love for the arts. With grace comes the incredible responsibility to be present in the lives of others — no matter what comes to the surface along the way. May this show help honor Jesus’s presence in a world that needs to be reminded of the ever-growing need to redemptively engage with one’s neighbor despite our many differences.

The free reception for Brokenhood: The Art of Healing Through Community runs from 7 to 9 p.m. on Thursday, March 12, at Denver Seminary, 6399 South Santa Fe Drive in Littleton. Pieces from the show will be on display in the Seminary’s Bridge Gallery in the Harold and Virginia Simpson Leadership Center through May 14; proceeds from the sale of inmate art will be split between the inmate and a nonprofit of his choice; proceeds from CAP facilitators' art will go to Denver Seminary's training and mentoring program. Find out more at denverseminary.edu/prisonart.