When Mary and John Elitch opened the Elitch Zoological Gardens in 1890, it had not only gardens and a zoo, but the Grand Pavillion Theatre, which presented vaudeville entertainment. The shows proved so successful that John Elitch started the Goodyear, Shilling & Elitch minstrel troupe, which played various locations in Colorado before moving out to California — where John developed pneumonia and died. That forced Mary to sell the property to a syndicate of Denver businessmen the next year, but she was able to buy it back after the Silver Crash in 1893.

By then, the current theater building had been added. That year, it became the home of the first summer stock theater in America. Elitch Gardens had a regular company as well as "star-stocked" shows, in which visiting actors would perform with the troupe. The theater company continued presenting shows through a variety of owners; in 1964, it was incorporated as an entity separate from the amusement park. 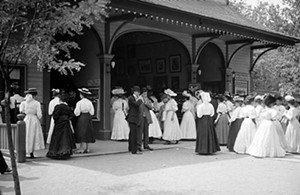 In the mid-1980s, when then-owners the Gurtler family announced that they'd be moving Elitch Gardens Amusement Park to the Central Platte Valley, the theater company launch a campaign to purchase that building — but fell short. Even so, the buildings remained on site after the amusement park pulled out and the site was redeveloped. The developers — including Chuck Perry, who was an usher at the Elitch Theater in his youth — incorporated both the theater and the pavilion into their design.

In 2002, the Historic Elitch Gardens Theatre Foundation was created to restore, preserve and maintain the theater and pavilion; the nonprofit estimated the cost of restoration at $14.2 million. By 2006, the foundation had enough money to begin the first phase, which called for restoring the Carousel Pavilion and making emergency improvements to the theater, including replacing the side of the building, fixing the stairwell, removing animals and dealing with foundation problems.
In 2013, the foundation moved on to phase two, which included dealing with health and safety issues as well as doing interior work to ensure that the building was up to code.

Phase three began in 2020; with the installation of restrooms, the building gained its permanent-occupancy certificate. There was also more work done on the electrical system and the stage, and the building was repainted.

This summer marks the first time in four years that the Historic Elitch Theatre has offered regular public programming, with free movie nights (Sing 2 is slated for Friday, July 22) and tours on the first Friday of the month that not only discuss the history of Elitch Gardens, but offer inside looks at the theater itself. Next summer, the foundation hopes to put on live shows in conjunction with local theater companies. 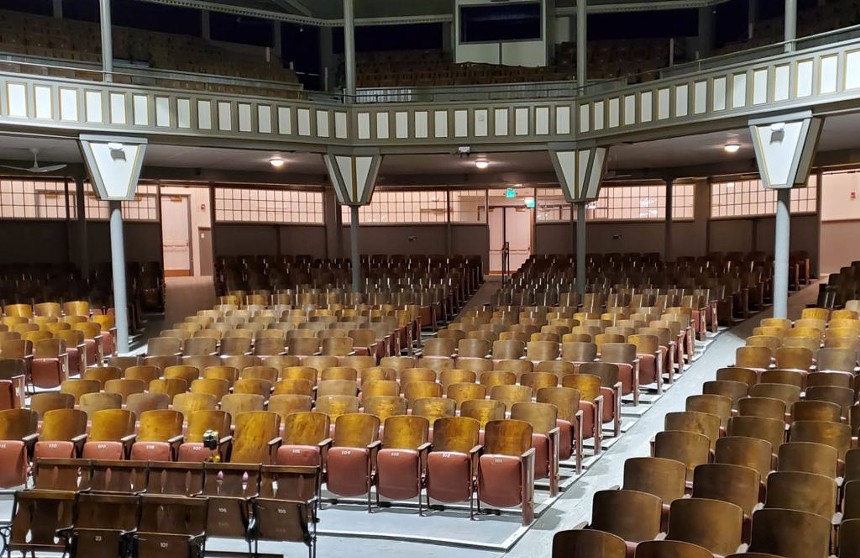 The theater is almost ready for a live audience.
Historic Elitch Gardens Theatre
Meanwhile, the foundation just received a $70,000 grant from the Lowes Hometown Initiative, which will help cover weatherproofing and painting the Fly building, an attachment to the theater that was donated by Helen Bonfils, a former member of the theater company and the daughter of the Denver Post's founder, who went on to publish the paper herself. The structure included dressing rooms and more space for set designs that allowed for larger productions, but it was no architectural wonder.

Fixing what current foundation president Greg Rowley calls "a big, ugly cinderblock building" is one of the last parts of phase three. "It's not as simple as just gathering some volunteers and having them paint. We have to hire professionals and either install scaffolding or a lift," he explains. The foundation hopes to have the project completed by October.

And another important part of the restoration plan was just completed. Although the theater was added to the National Register of Historic Places in 1978, there was never a physical acknowledgment of that status. But now, thanks to a grant from the William G. Pomeroy Foundation, a plaque has been placed on the north side of the building: The Historic Elitch Gardens Theatre is indeed historic.
KEEP WESTWORD FREE... Since we started Westword, it has been defined as the free, independent voice of Denver, and we'd like to keep it that way. With local media under siege, it's more important than ever for us to rally support behind funding our local journalism. You can help by participating in our "I Support" program, allowing us to keep offering readers access to our incisive coverage of local news, food and culture with no paywalls.
Make a one-time donation today for as little as $1.