Six Arty Things to Do on First Friday in Denver 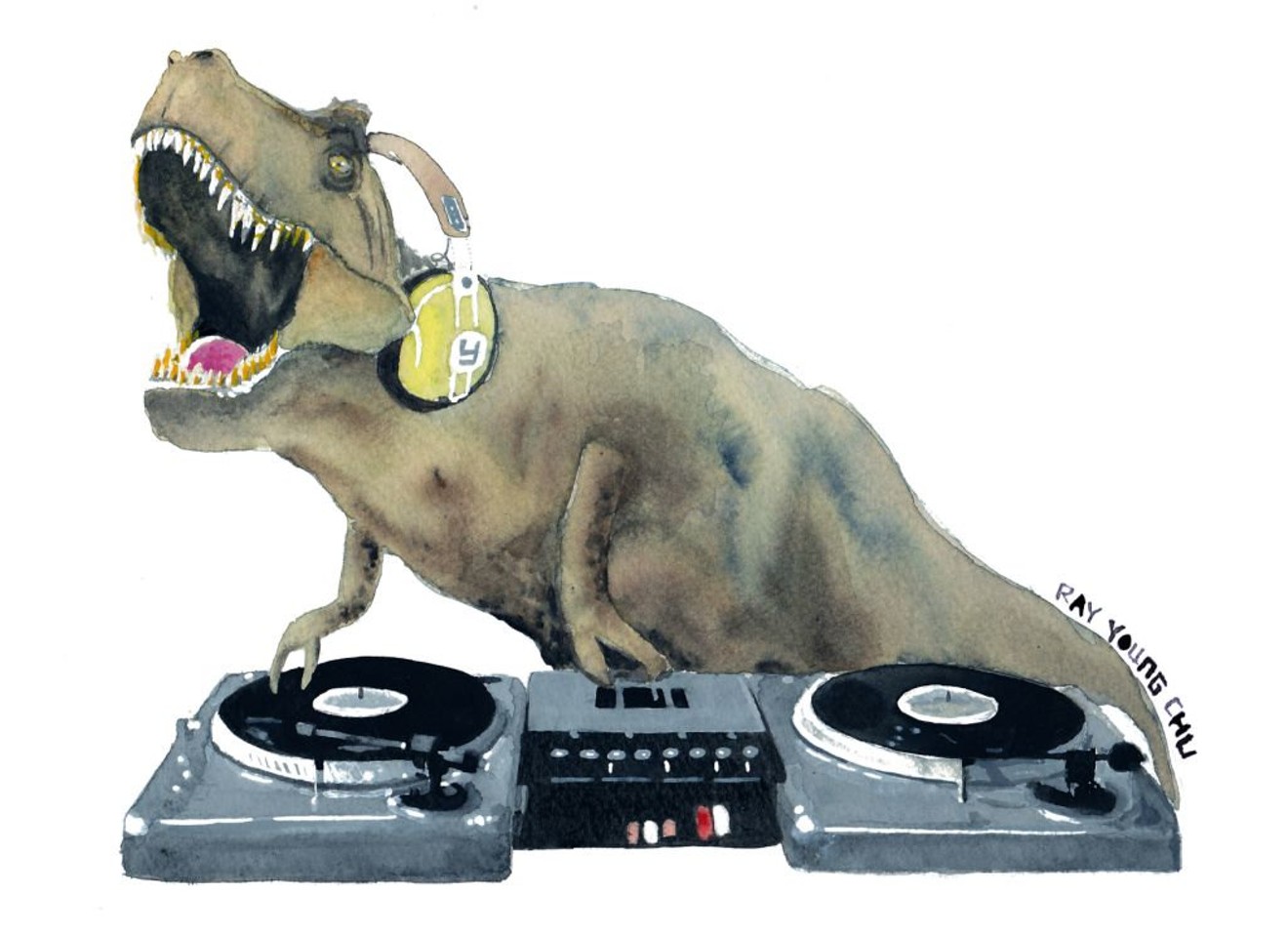 Ray Young Chu, "Dino DJ." Ray Young Chu
Pop art or political art? Pick your poison: The October 2017 First Friday in Denver is rife with big art, identity politics, fun and games, and a whole lot of eye candy. Here are six places to wander, near and far, through art shows of all sizes and subject matters. 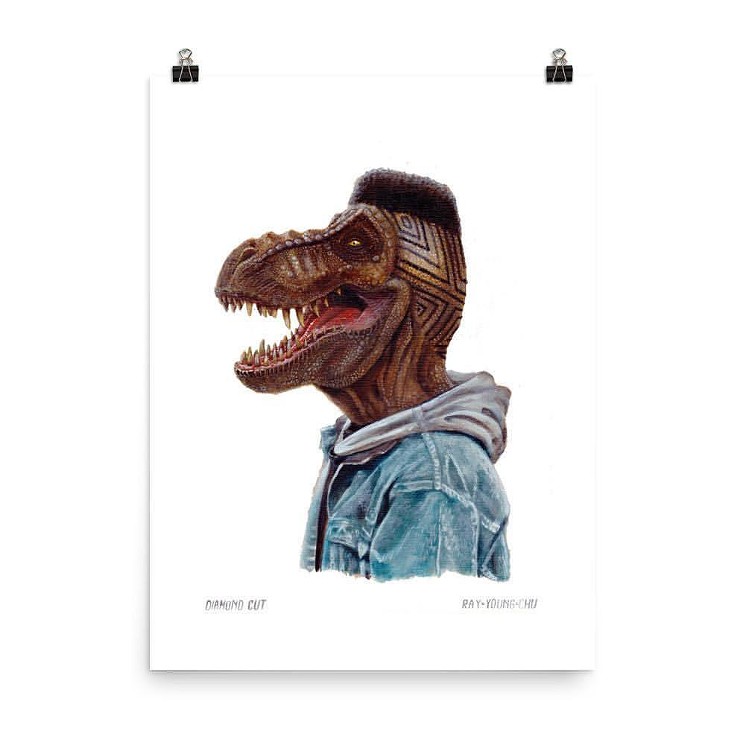 Ray Young Chu, "Dino Diamond Cut."
Ray Young Chu
[Update: Ray-Mart at Dateline on October 6 has been canceled.]
Ray-Mart #6
The Temple, 2400 Curtis Street
Friday, October 13, 8 p.m.
Denver expat Ray Young Chu, a modern outsider artist known for pop-derived and hip-hop-themed imagery, from doughnuts and dinosaurs to kitties with ray-gun eyes, is back in town for his first local shows in more than five years. He’s dropping the art here in a Ray-Mart installation at the Temple on Friday, October 13, with a full-on swap meet, a Halloween costume contest, art by Mark Bueno, Jared David Paul, Harrison Nealy and others — and yet more surprises. What’s a Ray-Mart? The artist describes it as a “North meets South Korean swap meet mixed with a Christian thrift and bong store found in space.” You can’t miss that, now, can you? 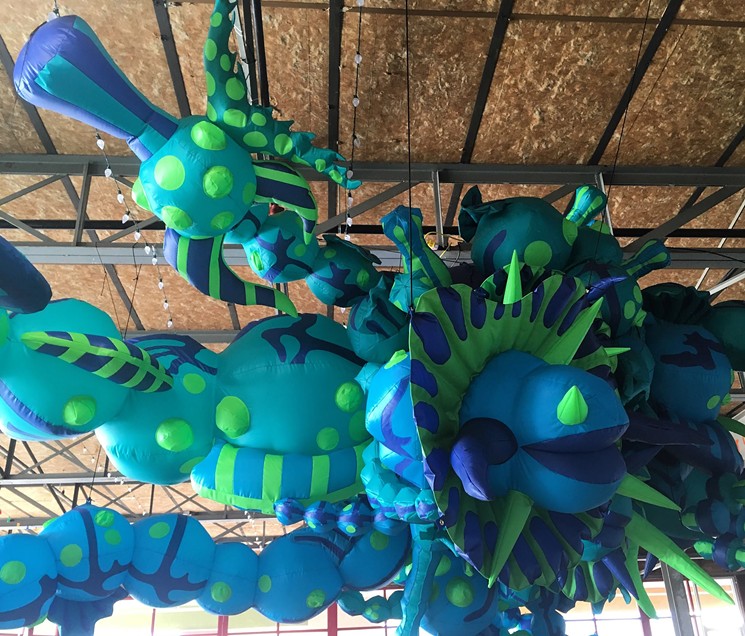 Nicole Banowetz, "Out of the Bloom."
Nicole Banowetz
“Out of the Bloom:” A One Night Pop-Up
Nicole Banowetz Studio
6759 West Colfax Avenue, Lakewood
Friday, October 6, 5 to 9 p.m.
Denver artist Nicole Banowetz’s latest inflatable art project is “Out of the Bloom,” a monumental representation of an algal bloom, a rapid overgrowth of algae composed of microscopic dinoflagellates and often enhanced by ecological imbalances. The huge blue-and-green construction is slated to hang above the gift shop at the Denver Zoo, but Banowetz's First Friday open house offers an up-close preview of the work. It’s also what might be just one stop along the 40 West First Friday Art Walk, which includes, among other things, a soft opening and impromptu member group show at Edge Gallery’s brand-new home in Lakewood, at 7001 West Colfax Avenue. Check it out. 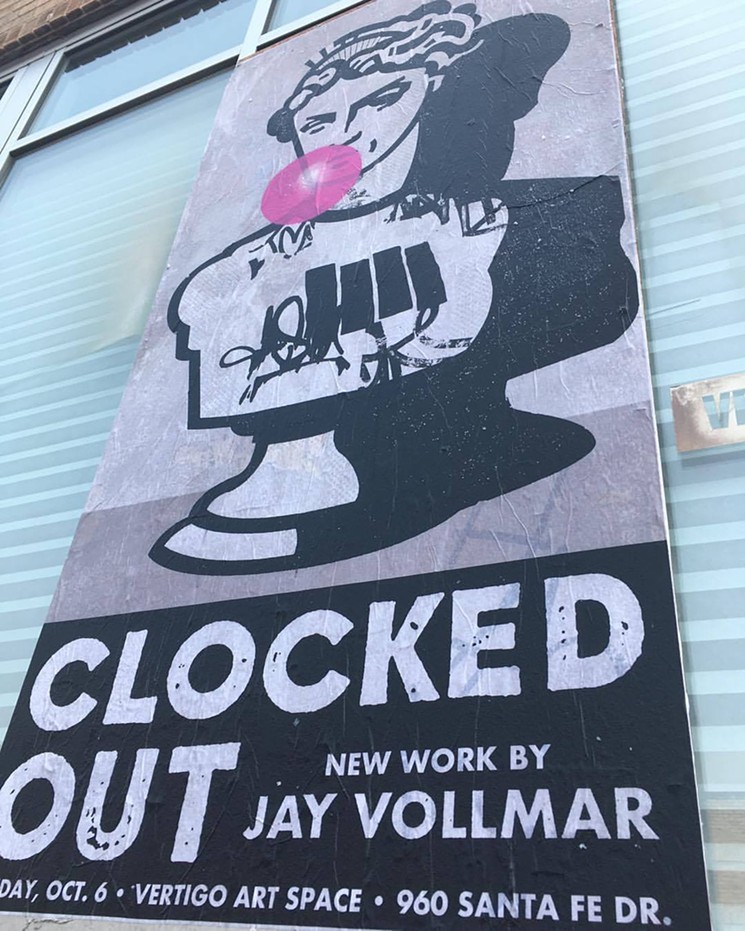 Jay Vollmar shows new art at Vertigo Art Space.
Jay Vollmar
Clocked Out: New Work by Jay Vollmar
Vertigo Art Space
960 Santa Fe Drive
Public Showings: Friday, October 6, and Friday, October 27
If you’ve ever picked up a hard copy of Westword on the street, there’s a good chance you’ve seen artwork by Jay Vollmar inside or on the cover. Now, Vollmar’s cutting out on his own to show work that’s not about work; if you can’t make one of the receptions, you can arrange a private walk-through by appointment at [email protected].

Work by Julio Alejandro, for "Priest in a Bathtub," at OkHi co.
Julio Alejandro
Julio Alejandro and Sierra Montoya Barela: Priest in a Bathtub
OkHi co., 3151 Larimer Street
Opening Reception: Friday, October 6, 6 p.m. to midnight
The Upper Larimer retail shop celebrates First Friday in October by feting pop-inspired artists and kindred spirits Julio Alejandro and Sierra Montoya Barela with a show of works that question authority and view icons of the past with the power of hindsight. While you’re there, check out what else is new at OkHi: The Vintage Clothing Collective has moved into the store’s pop-up space for a stay.

Gregg Deal.
Wet plate image by Shane Balkowitsch
Gregg Deal, Not Your Indian
University of Denver Museum of Anthropology, Sturm Hall 102
2000 East Asbury Avenue
October 6 to 19
Opening Reception: Friday, October 6, 5 to 7 p.m.
In conjunction with the Indigenous Film and Arts Festival, DU’s Museum of Anthropology hosts Not Your Indian, an exhibit of work by Pyramid Lake Paiute artist Gregg Deal, who already left his mark on Denver audiences late last year as an artist-in-residence at the Denver Art Museum. Also a notoriously strong voice in the movement to rename the NFL’s Washington Redskins, Deal expresses Native topics in a variety of contemporary mediums, from live performance to politicized murals. Learn more about his views at the reception, where he’ll give a talk at 6 p.m.