Doug Kacena Is Ready to Take Art in New Directions 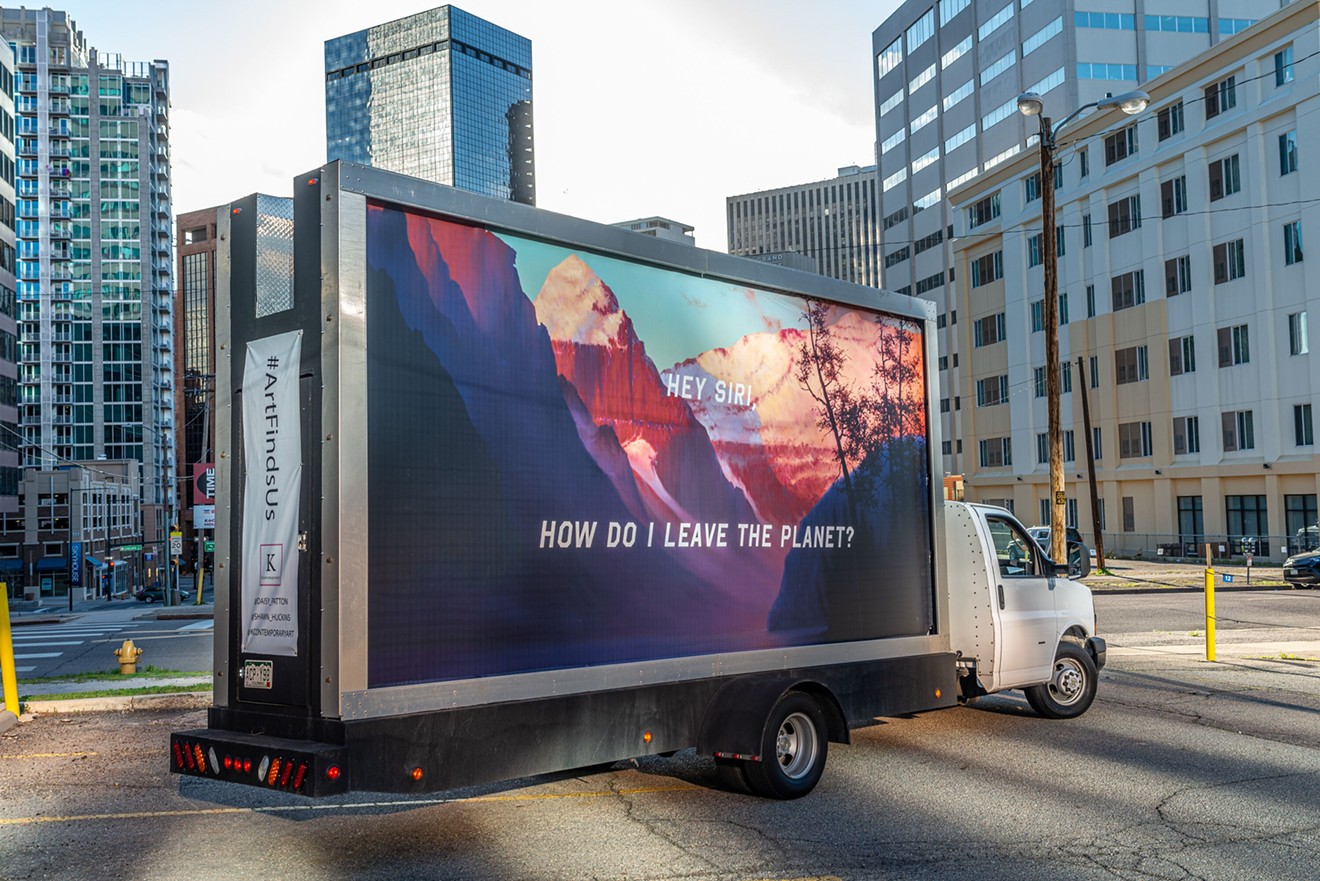 Shawn Huckins will have an indoor show after this outdoor tour. Jordan Spencer
With stay-at-home orders lifted and the state now officially in the safer-at-home stage, art galleries are starting to reopen, moving shows from virtual displays back to the walls.

But Doug Kacena, owner of K Contemporary, is not ready to return to business as almost-usual except with masks and social-distancing rules. In late April, he created #ArtFindsUs and took art to the streets, fitting a billboard truck with works by two of the artists in his stable — giant reproductions of pieces by Shawn Huckins and Daisy Patton — and touring them around town. "I wanted to make a big statement to my artists: I'm going to be here, I'm not going anywhere, and I'm going to come up with innovative ways to support you," he explains.

But artists weren't the only ones who appreciated #ArtFindsUs. "I had every municipality asking for it," he recalls. With time short, he ultimately added just Thornton and Arvada to a lineup that already included spots in Denver and Boulder.

Now Kacena's thinking of taking a version of that show on the road, but instead featuring jazz musicians playing on the back of a flatbed, and monthly "rolling parades of artworks." His initial #ArtFindsUs project cost $2,400, including the rental, and he thinks that exposing people to art, to the way an actual work feels in front of you and not on a screen, is probably worth that price. "What if we got a series together," he muses, "a couple of billboard trucks? We could do it maybe once a month."

He's not giving up on galleries, though. He's already working on a solo show for Huckins that would open in June; he's leaning toward keeping the gallery "by appointment only," and also hosting special VIP gatherings several nights a week. "We can make it feel special," he explains. "That's what our buyers and clients want, anyway."

And Huckins's show sounds like something special. "It's going to be phenomenal, quite timely," says Kacena, explaining that the artist has moved away from memes to historic imagery of America's forefathers juxtaposed with ghostly Roman sculptures that symbolize "the fall from greatness, the fall of empire."

But art will rise again, and Kacena has other ideas for new things to do with the exhibition space at 1412 Wazee Street that K Contemporary shares with two other galleries. It can be the "epicenter for having a cultural dialogue," he says. "We can't have big shows and large social engagements, so let's have smaller ones."

Now that the stay-at-home order has been lifted, "as everyone's coming out, we have this giant reset button," he adds. "It's time for a cultural renaissance; we can create an environment where we are shaping this environment."

"And it took a pandemic to do it."
KEEP WESTWORD FREE... Since we started Westword, it has been defined as the free, independent voice of Denver, and we'd like to keep it that way. With local media under siege, it's more important than ever for us to rally support behind funding our local journalism. You can help by participating in our "I Support" program, allowing us to keep offering readers access to our incisive coverage of local news, food and culture with no paywalls.
Make a one-time donation today for as little as $1.