Buster Keaton's The Cameraman kicks off the 2022 Denver Silent Film Festival Denver Film
It’s been two years since the Denver Silent Film Festival went more silent than usual. The pandemic ate up two seasons of the event, which was co-founded in 2010 by CU Denver Director of Film Education Howie Movshovitz, but fans of classic cinema will be happy to know that it’s coming back. The festival’s ninth iteration will take place over the weekend of May 20-22 at the Denver Botanic Gardens’ Sturm Family Auditorium. And the theme this year is purposefully timely: “We Need to Laugh.”

“The 2022 festival will be all comedy,” says Movshovitz, “with a lineup of silent films rarely, if ever, seen in these parts — and all of them funny. This is a festival that’s good for us.”

Important to the slate of offerings this year is the focus on comedies. “I think we need it,” says Movshovitz. “Silent comedies are deeply hilarious. And because of the silence, they could be really silly.” 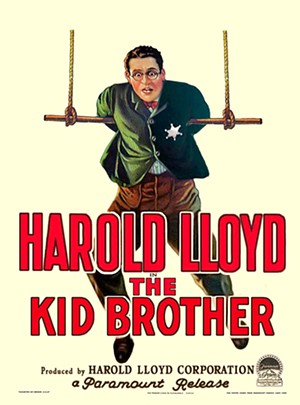 Denver Film
The Festival opens with the 1928 comedy The Cameraman, starring Buster Keaton as a lowly photographer who takes up newsreel shooting to impress newsroom secretary Sally (Marceline Day). The concluding film on Sunday is 1927’s The Kid Brother, a masterful blend of slapstick, action and romance starring Harold Lloyd as a bashful and clever boy from a brawny family who must prove his mettle when a medicine show run by con artists comes into town.

In the grand tradition of the silent era, all films at the Festival will be partnered with live music. Accompanists include the Mont Alto Motion Picture Orchestra, Donald Sosin and Joanna Seaton, The Dollhouse Thieves, CU Denver College of Arts & Media’s Student Orchestra, Hank Troy and Rodney Sauer.

What might be a surprise to some is just how loose the musical accompaniment was to silent film in its day. “Unless there was a specific score,” Movshovitz says, “every time you see a silent film with live music, it’s a different film. Some films were scored from the beginning, but if you’re talking about 1920, by the time that film got to Denver, they weren’t playing that score most of the time. By the time it got to Julesburg, the piano teacher was playing. And he or she would do whatever they could.”

Denver Film
One of the musical highlights of the Festival is Donald Sosin’s work with CU Denver music students, with whom he’s worked to compose an original score for Édouard-Émile Violet’s Max the Circus King, which they will perform when that film is shown on Saturday afternoon.

THE CAMERAMAN
Directors: Edward Sedgwick, Buster Keaton
Friday, May 20, 7 p.m.
Hopelessly in love with a woman working at MGM Studios, a clumsy man, Buster (Buster Keaton), attempts to become a motion picture cameraman to be close to the object of his desire.
Accompanied by the Mont Alto Motion Picture Orchestra

COMEDY SHORTS
Saturday, May 21, 10 a.m.
Films include Buster Keaton and Edward F. Cline’s One Week, Roscoe Arbuckle’s The Cook, Charlie Chaplin’s Easy Street, and Clyde Bruckman and Leo McCarey’s The Battle of the Century.
Accompanied by the Dollhouse Thieves.

THE STRONG MAN
Director: Frank Capra
Saturday, May 21, 1 p.m.
Starring Harry Langdon and directed by Frank Capra in his feature-length directorial debut. Paul Bergot (Langdon), a meek Belgian soldier fighting in World War I, receives a letter and a photo from "Mary Brown," an American girl he has never met. After the war, he travels to America searching for her.
Accompanied by Hank Troy.

MAX THE CIRCUS KING
Director: Édouard-Émile Violet
Saturday, May 21, 4 p.m.
In legendary comedian Max Linder’s final film, a man suffering from drunkenness gets serious after he falls for the daughter of a circus director, who forbids her romance with an outsider.
Accompanied by the CU Denver College of Arts & Media’s Student Orchestra with Donald Sosin and Joanna Seaton.

TWO TIMID SOULS
Director: René Clair
Sunday, May 22, 11 a.m.
In this 1928 French romantic comedy, a timid lawyer (Pierre Batcheff) bungles a court case, earning the enmity of his client. Two years later, the lawyer and his former client become rivals for the hand of a timid young woman.
Accompanied by Rodney Sauer.

SO THIS IS PARIS
Director: Ernst Lubitsch
Sunday, May 22, 2 p.m.
When a flirtatious dance team meets a doctor and his wife, the foursome becomes involved in a series of harmless little affairs — and tries very hard to keep them secret — to keep the spark going in their relationships.
Accompanied by Hank Troy.

THE KID BROTHER
Director: Ted Wilde, Harold Lloyd, Lewis Milestone
Sunday, May 22, 4 p.m.
A sheriff's milquetoast son (Harold Lloyd) has a chance to prove himself when a medicine show run by con artists comes into town.
Accompanied by Donald Sosin and Joanna Seaton.

For more information and to buy tickets, visit the Denver Film website.
KEEP WESTWORD FREE... Since we started Westword, it has been defined as the free, independent voice of Denver, and we'd like to keep it that way. With local media under siege, it's more important than ever for us to rally support behind funding our local journalism. You can help by participating in our "I Support" program, allowing us to keep offering readers access to our incisive coverage of local news, food and culture with no paywalls.
Make a one-time donation today for as little as $1.