See and Be Scene: Tour the Murals of RiNo

Gamma Gallery's mural on Downing and 37th streets. Emily Ferguson
Ready for a break from holiday festivities? A tour of Denver's public art shows that some of the best work isn't found in museums, but in this city's alleys and parks.

While the Denver Public Art portion of the Denver Arts & Venues website offers multiple self-guided tours around the city, there are other options, including creating a route using a map on the RiNo Art District website that lists murals in an area that's definitely been discovered by the Instagram crowd.

"What's great is the map makes it easy to make your own walking tour, driving tour, specific artist tour — the website is set up so that all the murals a single artist has in the district is listed," says Alexandrea Pangburn, the district's director of curation. "If you're in a specific part of RiNo, you can make a specified location tour. The possibilities are never-ending!"

Some of those possibilities are just plain fun, including a psychedelic frog that perches on and becomes part of a prickly pear cactus in a color-popping piece by Swartz Brothers Art. Not far away is Sandi Calistro and Sandra Fettingis’s mural of a dreamlike girl with a third eye gazing at a crescent moon dripping in flowers. “This is perfect for ’shrooms,” one viewer suggested. Sandi Calistro and Sandra Fettingis’s mural has a dreamlike presence.
Emily Ferguson
Jeremy Burns’s "Larimer Boy and Girl" interacts with unusual architectural aspects of its location. Painted on the sides of protruding fins off a building on the titular street, the cartoonish faces of a girl and boy can only be seen at certain angles by walking toward the work from a distance in either direction.

Other pieces tackle the social and political issues plaguing the neighborhood.

“Street art has sometimes been criticized as a catalyst for gentrification,” wrote legendary street artist Shepard Fairey after painting his "Power and Equality" mural in RiNo. “I’m a believer that with the right policies in place, support for public art and protections for residents and the most vulnerable populations can exist side by side.”

His behemoth painting, at the intersection of Larimer and 27th streets, features his trademark black, red and yellowish-cream palette. A stylized Black woman gazes powerfully from a stark background under the words “Power and Equality” and “Power to the People.”

If you're interested in a more organized (and paid-admission) tour, the Denver Graffiti Tour guides aren't afraid to confront the same issues that Fairey addresses. “Housing affordability is a concern for a lot of people, so it’s definitely something we discuss," says Erin Spradlin, the tour's co-owner.
click to enlarge 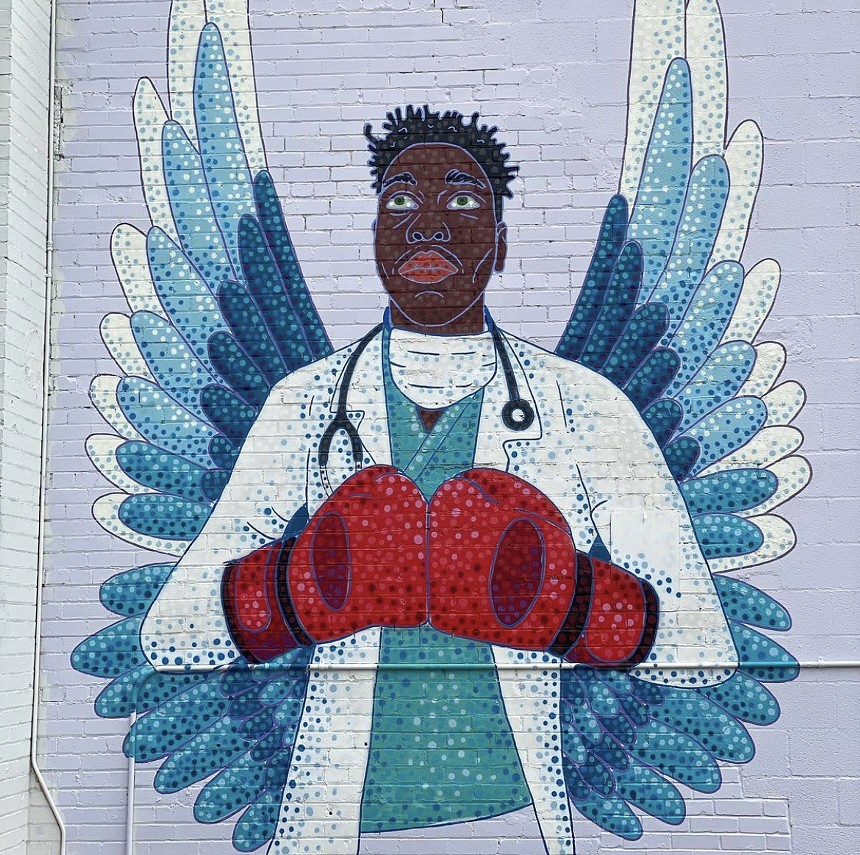 Frontline Fighter by Austinzart illustrates the heroism of first responders during the pandemic.
@Austinzart Instagram
The tour’s path “is very close to a lot of people who have been displaced from their homes and organizations trying to address that issue,” she continues. “We noticed it and were really bothered by that, so we started to speak about it in the tour and noticed people really responded to that.'

Spradlin says the business has gotten positive feedback for raising awareness. “Some of [the murals] directly speak to it, others provide a good representation of ways to talk about it,” she continues.

"Frontline Fighter" by Austinzart illustrates the heroism of first responders during the pandemic; a Black male nurse with angel wings looks upwards with his hands in red boxing gloves. "Holding Hope," a collaboration by artists Valerie Rose and Chloé Duplessis in recognition of National Disability Employment Awareness Month, uses words to make its point, with “Disability Rights Are Human Rights” written alongside flowers and stylized hand gestures.

If you can't make the graffiti tour, Spradlin has a suggestion: “Go to Denver Central Market, have a good lunch or a beer, and walk into the alley and the parking lot. That’s where a lot of the large and impressive pieces are.”
click to enlarge Casey Kawaguchi's mural at 28th and Larimer streets.
Emily Ferguson
Near that parking lot, at the intersection of 28th and Larimer streets, is a gigantic horizontal portrait of an Asian woman rendered in greyscale with a pop of red from her kimono; surrounded by cherry blossoms, she peeks over her shoulder with an intense glance. The skillful minimalism of this piece, by Casey Kawaguchi, makes it a standout.

In an alley parallel to Larimer between 30th and 31st streets are some of the neighborhood’s most enchanting works, including another minimalist piece by Kawaguchi. A crumbling brick wall’s rectangular depressions serve as a canvas for a puppy peeking out from the mural; the monster from Stranger Things is nearby. Most of these murals aren’t signed; Spradlin says that posting a photo on social media will usually get you the answer to who painted it.

In an alley parallel to Larimer Street between 30th and 31st streets, a mural of a dog peeks out from a depression in the brick.
Emily Ferguson
Part of the fun of a self-guided tour is learning how to identify an artist's signature style. Jason Garcia’s angular, abstract forms can be found on multiple buildings; a mural in shades of electric lime green creates what looks like geometric fabric hanging off the side of Walnut Housing.

The art you'll see in RiNo is always changing, with some murals covering older ones. When I walked the area almost two years ago, I spotted charming crocheted works by the Ladies Fancywork Society streaming from the roof of Matchbox. “They have in the past couple years had a prominent piece…on the roof of the Matchbox, but recently, in the past couple months, that came down,” Spradlin says. “Our assumption is that it will be replaced because they have traditionally replaced it, in part because the yarn gets battered by the weather.”

Keep an eye out for a new piece in that spot the next time you tour RiNo. But remember to watch out for all the influencers snapping those grid-worthy photos.
KEEP WESTWORD FREE... Since we started Westword, it has been defined as the free, independent voice of Denver, and we'd like to keep it that way. With local media under siege, it's more important than ever for us to rally support behind funding our local journalism. You can help by participating in our "I Support" program, allowing us to keep offering readers access to our incisive coverage of local news, food and culture with no paywalls.
Make a one-time donation today for as little as $1.
Emily Ferguson is Westword's Culture Editor, covering Denver's flourishing arts and music scene. Before landing this position, she worked as an editor at local and national political publications and held some odd jobs suited to her odd personality, including selling grilled cheese sandwiches at music festivals and performing with fire. Emily also writes on the arts for the Wall Street Journal and is an oil painter in her free time.
Contact: Emily Ferguson