Nadiya Jackson's Zaryn describes love and sexuality at the Denver Fringe Fest. Nadiya Jackson
In 2017, artist Ann Sabbah was in Scotland, attending the Edinburgh Festival Fringe. The annual celebration of experimental performance that launched in 1947 moved her, and she wondered why Denver didn't have one of its own.

“It was such an incredible experience that I literally bought the domain denverfringe.org right then and there, standing in the middle of the Royal Mile,” Sabbah recalls. “I felt convinced that it would fill a need in Denver and be embraced as an essential part of Denver’s evolving art scene.”

For decades, fringe festivals have thrived in cities around the world, including Colorado's own Boulder International Fringe Festival, which formed in 2004. While Denver has a rich independent theater scene, with groups like  Zabiti Circus, Rainbow Militia, Dangerous Theatre, Curious Theatre Company, Buntport Theater and more, Sabbah's fringe festival is the first of its kind in town.

Sabbah planned to launch the Denver Fringe Festival with various in-person acts last summer, but the pandemic spoiled those plans.

“We started planning for the 2020 Denver Fringe in January of 2020 and got a great response from artists right out of the gate. About half of our applicants were from other states and one from Canada. We had 25 different shows apply," says Sabbah. Then COVID-19 hit. "In April, we had to make the decision to go completely virtual. The artists were incredibly versatile and totally rose to the occasion. Some made in-depth video productions and others did livestreaming performances.”

Audiences tuned in to the festival from thirty states and seven countries, including Canada, Italy, Japan, Germany and Ecuador.

“It actually worked in the artists’ favor, because their family, friends and fans could enjoy their work from wherever they were,” Sabbah notes. “And I think, at that particular moment, everyone felt ready to embrace new ways of performing and receptive to trying new ways of accessing the arts at home.”

This year, the Denver Fringe Festival is going hybrid, with live performances at indoor and outdoor venues in Five Points and throughout the RiNo Art District as well as livestreaming and pre-recorded shows from local and out-of-state artists. The festival is also hosting KidsFringe, with live performances for audiences of all ages on June 26 and 27 at the Zabiti Circus wagon, which will be parked at 26th and Curtis streets. There will also be free clowning, circus and improv workshops for children.

There are plenty of shows for adults, too, from comedies to dramas and everything in between. One, The FABULOUS King James Bible, is a comedy penned by writer, actor and director Michael Knight. Knight is also the executive director of the nonprofit New Generation Theatrical in Orlando, which will livestream the play for the Denver festival.

The show depicts King James I having a conversation with two high priests about translating the Bible in a more straightforward manner.

“The inspiration actually came from a viral Tumblr post I came across one day explaining that King James had a man he kept promoting to Earl and Duke because he was in love with him,” Knight relates. “And when his priests let him know this wasn’t allowed because of what was in the Bible, he asked to create a new, easier-to-read Bible so that he could know for sure that it wasn’t allowed. Orlando has a beautiful LGBTQIA community, and it felt like a story that would appeal to the city as a whole, because many of the people [in the] community are religious as well, and at odds with that at times.”

What’s the point of King James’s taboo love interest leading to a discussion about having a clearer translation of the Good Book?

“Religion can be a wonderful and beautiful thing,” Knight says, “and it should be inclusive. So I would hope that audiences feel, whether they are religious or not, or members of the LGBTQIA communities or allies, that there is a place for everyone in every part of human existence. If we take a second to discuss it logically, we’ll all see how it can work. And also, there’s room for humor in everything as well."

In Zaryn, Denver writer and director Nadiya Jackson depicts the titular character's love escapades, relationships and explorations of self and sexual expression. The play is interactive, allowing audience members to pick between two colors that determine Zaryn’s fate.

“As a writer, writing an ending is always the most puzzling component for me due to it being the last moment an audience is left with to digest,” Jackson declares. “I love interactive art and theater. It’s always a thrilling experience for me, and I wanted to incorporate it into my own work. Making the choice to let the audience decide the ending with two colors helped alleviate my indecisiveness on how I should write the ending for Zaryn.”

However it ends, the play is all about sex.

“Sex isn’t new, but somehow we still witness individuals squinch their noses because sexuality isn’t about dedicating our bodies to be a baby-making machine,” Jackson notes. “Zaryn is bold, but there is nothing new under the sun. I hope people take away from Zaryn to be open and honest about their sexuality and remove any negative stigmas around practicing safe and consensual sex.” 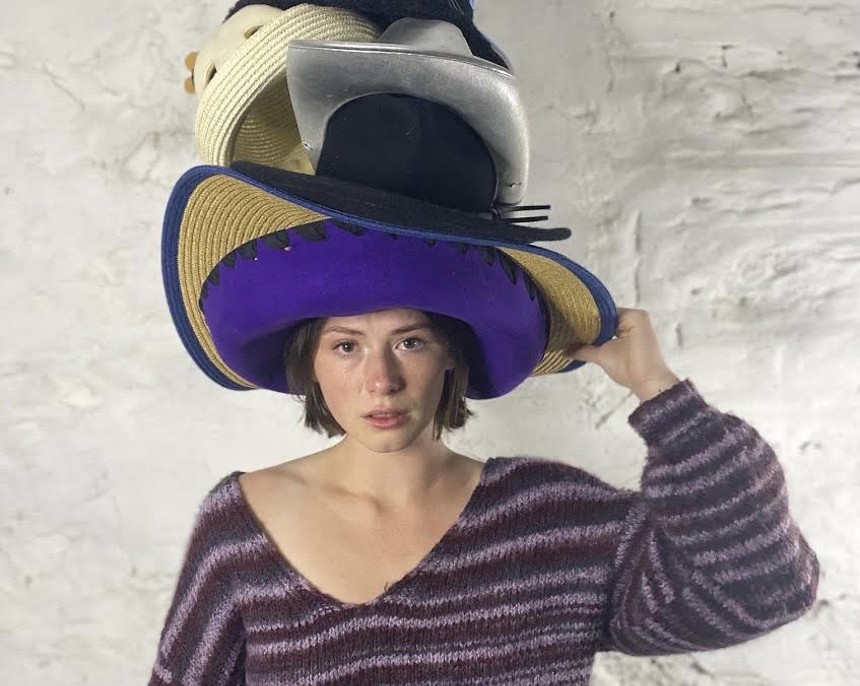 The Hat Cart, by Louisville-born actor and writer Emily Bollman, will also run at Cleo Parker Robinson Dance. The comedic memoir chronicles the author's experiences working at a hat cart in Boulder. Bollman plays herself and other characters in the show as she goes through an unfurling identity crisis.

“[The play] turned into this really wacky yet beautiful story about family and identity with a strong feminist undercurrent,” Bollman explains. “I also want people to have a good think about catcalling, and the destructive implications of this form of harassment. My hat cart experience was mostly good and silly, but it was also my introduction to objectification.

“Being out in the open left me prey to a lot of unwanted attention simply by existing,” she recalls. “I was nineteen at the time, which made it all the more sad and confusing. I have a line in my show that goes, ‘I am stressed out and feel vulnerable and violated when I’m catcalled. But if I’m not catcalled, then I’m not pretty?’ It’s also a comedy, so, like, laughter?”

"Because it takes a lot of money to develop and mount a production, it can be prohibitive for artists," she says. "The Fringe Festival model takes some of that risk out of it for artists and provides a platform for more innovation and experimentation."

The Denver Fringe Festival kicks off its second hybrid season on Thursday, June 24; it runs through Sunday, June 27, across Denver. For more information, visit denverfringe.org.
KEEP WESTWORD FREE... Since we started Westword, it has been defined as the free, independent voice of Denver, and we'd like to keep it that way. With local media under siege, it's more important than ever for us to rally support behind funding our local journalism. You can help by participating in our "I Support" program, allowing us to keep offering readers access to our incisive coverage of local news, food and culture with no paywalls.
Make a one-time donation today for as little as $1.