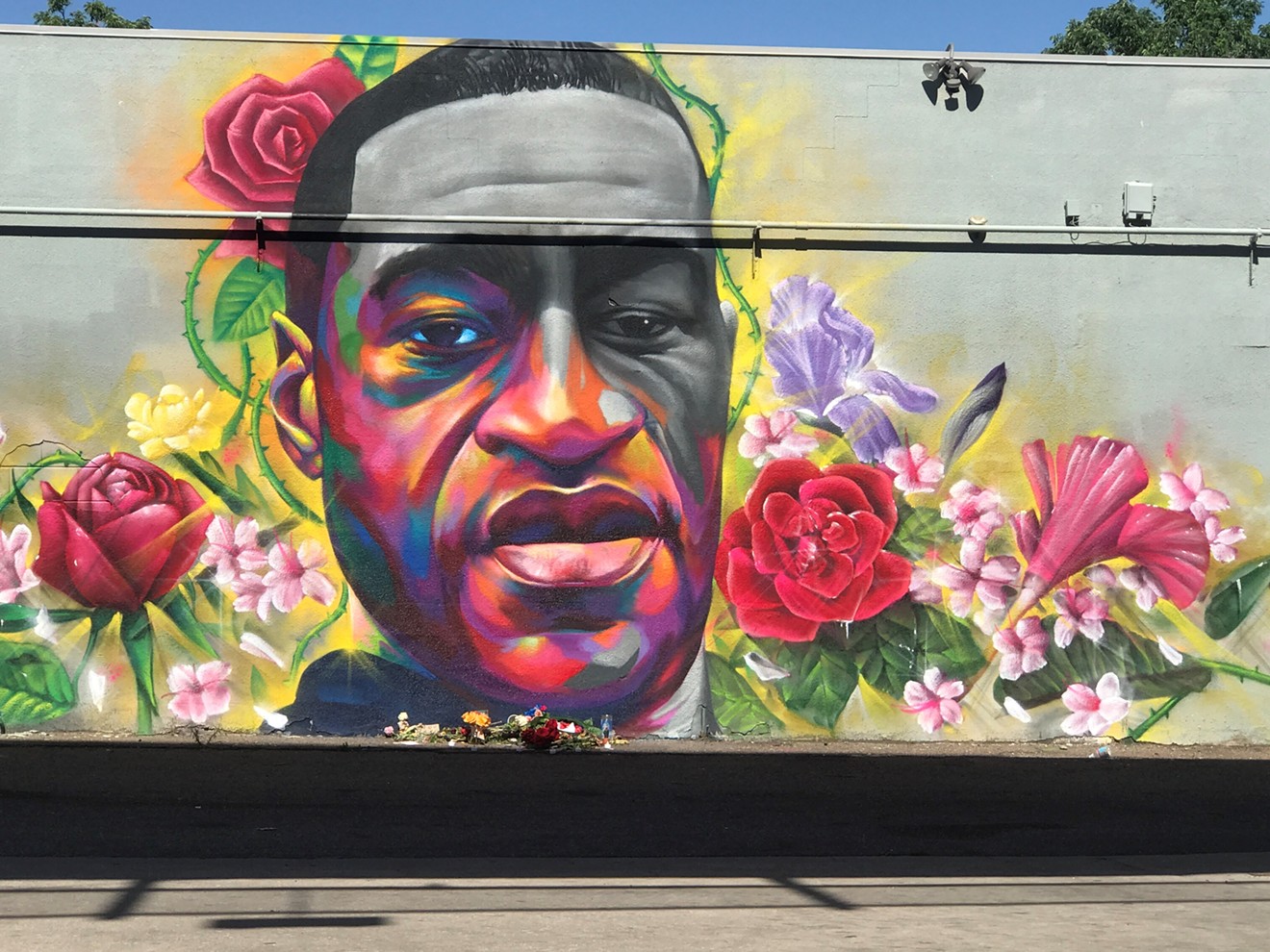 Thomas "Detour" Evans and Hiero Veiga's portrait of George Floyd. Kyle Harris
Few Denver artists have been as relentless in their commitment to portraiture as Thomas "Detour" Evans, who has spent years memorializing prominent politicians, musicians, creatives and activists, on canvases and on the walls of Denver and beyond. His images have become an integral part of the Denver landscape, memorializing legends from the black community and offering spectacular visions of its future.

Now, with Boston-based street artist and portrait painter Hiero Veiga, Evans has started a series of collaborative paintings in Denver paying tribute to recent victims of police violence and in solidarity with the Black Lives Matter movement.

The two just completed a mural of George Floyd, the 46-year-old black man who was killed on May 25 by a Minneapolis police officer now facing second-degree murder charges. That painting is at Colfax Avenue and High Street. Now they're working on a new mural at 2855 Walnut Street, of Breonna Taylor, the 26-year-old EMT who was shot eight times by the Louisville [Kentucky] Metro Police Department after officers used a battering ram to smash their way into her home on March 13.

The portrait of Floyd depicts his mournful face, staring forward, surrounded by ornate flowers; the portrait of Taylor shows her staring out with a somber face, engulfed by red roses.

"Two black muralists (Myself and @hieroveiga ) coming together in Denver to let their art speak," says Evans on Instagram. "Hoping to usher in the next generation of artists, and especially black artists, that will use their art to make change in society." Evans has not responded to requests for comment.

These portraits are critical, as Evans explains, to preserving the memory of these victims of police violence and championing the movement against police brutality.

"In the years to come, people in Denver will still remember the name Breonna Taylor and her story," writes Evans. "@hieroveiga, @justcreatedit, and I are using what we are good at to support and uplift the movement."

In recent days, other portraits of George Floyd have been put up around town. His name has been inscribed in spray paint on the Statehouse and all around Capitol Hill, a photograph from his last minutes is wheat-pasted to a wall at Colfax Avenue and Franklin Street, and a portrait of him with the words "My Daddy Changed the World," by artists Karlee Mariel and Armina Jusufagic, is on the Sports Castle building at 1000 Broadway.

Both images by Evans and Veiga are hopeful, suggesting that something beautiful is emerging from the horror of these two people's deaths at the hands of killer cops. With protests raging in the streets; proposals to de-fund the Minneapolis Police Department; the local school board working to boot the Denver Police Department out of the Denver Public Schools; lawmakers pushing bans on less-lethal weaponry, chokeholds and other protest policing tactics; and a federal judge issuing a restraining order against the Denver Police Department, change is coming swiftly, and this movement's efforts are working.
KEEP WESTWORD FREE... Since we started Westword, it has been defined as the free, independent voice of Denver, and we'd like to keep it that way. With local media under siege, it's more important than ever for us to rally support behind funding our local journalism. You can help by participating in our "I Support" program, allowing us to keep offering readers access to our incisive coverage of local news, food and culture with no paywalls.
Make a one-time donation today for as little as $1.