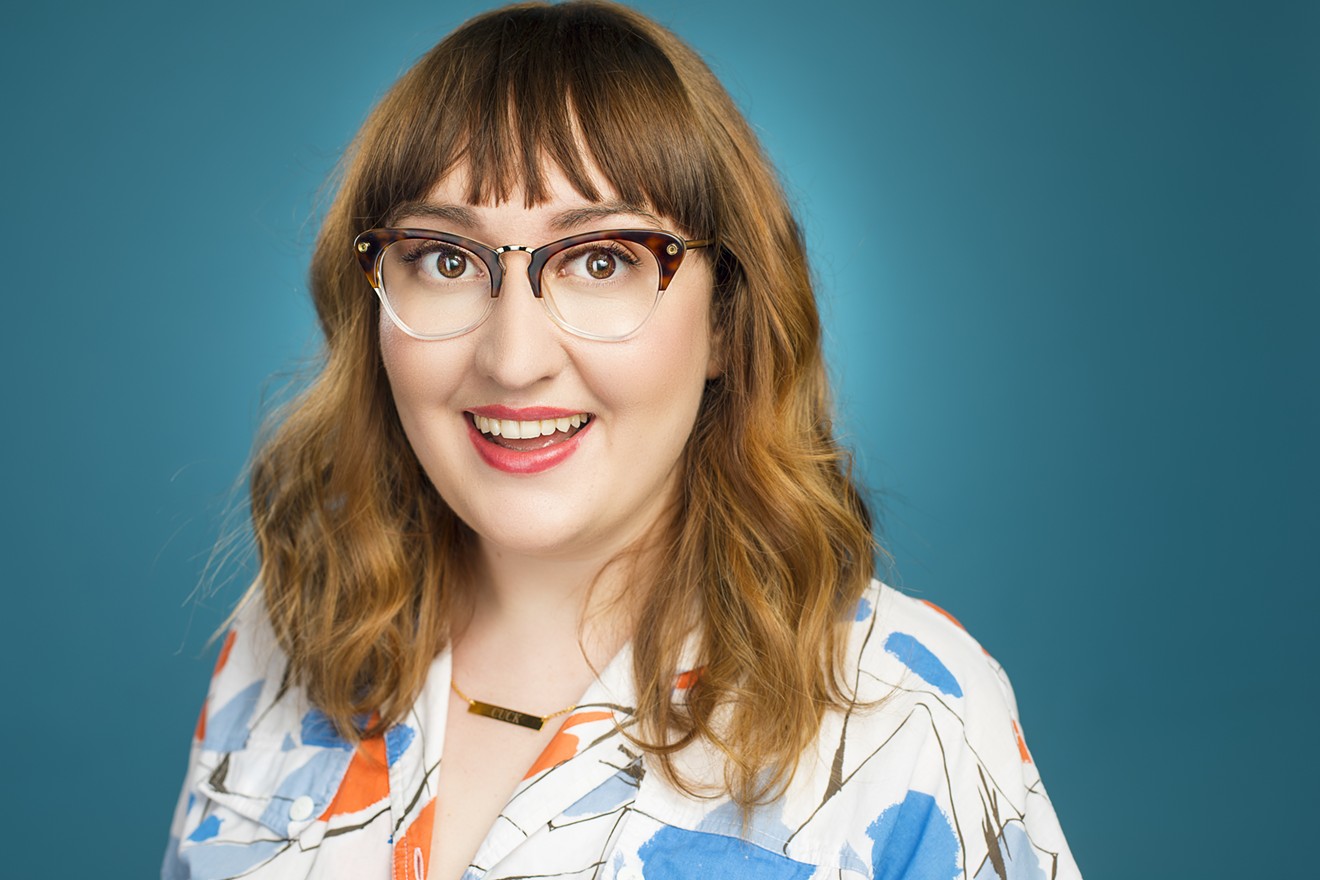 The very funny standup comic and writer Emily Heller. Kim Newmoney
Emily Heller is a standup comedian, writer, actress and podcast host. Ahead of her shows at the High Plains Comedy Festival, Heller spoke with Westword about her new standup special, No Men Allowed - (Kinda!!), writing for the HBO series Barry, the importance of a female perspective in a writers' room, and her preferred nickname.

Westword: How did the taping of your new standup hour go?

Emily Heller: The taping went great! It was exciting to perform in such a legendary theater, especially with material I've been working on for so long and that I'm so proud of. There were a few men there, but that didn't ruin it, somehow.

What percentage of the audience was female? Did the advertising work?

It was mostly women, which was cool, but the important thing is that it was all people who wanted to be there and who got what I was trying to say. The whole concept of the taping being no-men-allowed was less about shitting on men and more about making sure that I got to do the funnest show possible. I toured this material a lot, and there were definitely some male-heavy crowds who it felt like I had to win over. There are jokes in my act — about how good it feels to take your bra off, for example — that I don't expect to hit as hard in a room full of hostile men, weirdly.

You have a very defined persona as a standup. Did that come naturally? What about being by yourself in front of a crowd?

That's very nice of you to say! I think doing standup teaches you a lot about how people see you. I consider myself a pretty un-self-conscious person, actually, and so a lot of my evolution as an artist has been figuring out what people see when I walk on stage and figuring out how to address it. What are the things about how I am and what I'm saying that resonate with or surprise people? How much do I have to explain myself? And how do I do that without sounding like I'm shitting on myself?

At one point I was on a writing retreat with some other comics, and we did an exercise where we wrote down what we liked about each other's comedy and gave it to them on an index card. Someone — I believe it was Jamie Lee — referred to me as a "little sister," and I thought that was so funny and weirdly accurate. Also, I'm the youngest of three. It seems pretty common for comedians to be the youngest in the family, and that may have something to do with the number of eyeballs pointed at you from the get-go.

You learn to perform. I've always loved performing, and I didn't always want to be in an ensemble, either. There's a story my mom told me about when I was a very young kid in a preschool concert of some kind, all the little kids up on stage singing. Apparently I started screaming because I wanted to be the only one up there.


You've been a staff writer on some very funny shows, and you are a very funny standup comic. Between the two, which type of comedy would you say is naturally more in your wheelhouse? Or is being a podcast host of your show Baby Geniuses the dark-horse candidate in this race?

Everything in my career has been a process of trying stuff out and seeing what sticks. I don't tend to keep at stuff that I'm not good at right away (a trait I've recently learned is pretty common for people like me with ADHD), so I'd say they're both pretty firmly in my wheelhouse. Otherwise I would have quit them just like I did guitar, cello, hiking, and reading the news.

Writing standup and writing television satisfy such different creative impulses, but they're impulses I have. With TV writing, I get to problem-solve and write in other people's voices and be a part of a team. It means sometimes I have to compromise on what I think should happen but that we end up making something that's bigger and better than anything I could do on my own.

With standup, I'm alone, but I have complete control. I don't get to write in anyone's voice but my own, and that can sometimes limit the types of jokes I can do, but it also means they'll be delivered exactly how I want them to be delivered. It's more vulnerable, because it's really ME up there, but it's more fulfilling, too.

Podcasting is a great way for me to hang with my friend Lisa and put stuff out there without the agony of revision. It's a skill that helps with everything else I do in my career. Everything feeds everything else, so I don't plan on stopping any of them completely at any point in my life.


What's your favorite part about being a podcast host?

The best thing about hosting my podcast is spending time with my friend Lisa and forcing her to get to know me. I think it's rare to spend that much time with someone talking about so many different topics, and then to have a record of it. She's the funniest, smartest, coolest, grossest person I know.

Let's talk about you writing for the excellent HBO series Barry. What were you drawn to about the show as a writer?

Well, from the get-go, it was clear that Bill Hader and Alec Berg had such a clear vision for the show. The pilot is great, which most pilots – even for excellent shows – are not. Pilots are really, really hard to write. It also felt like a stretch for me, writing about someone with violence so deep in their bones. I don't relate to that at all, and so I was excited about how much I'd learn from working on the show.

I do so much therapy and standup and just talking in general, so learning how to write for someone who can't articulate their interior landscape the way I've been learning to my whole life has been a great exercise. And without saying too much, in the stuff we've written for Season Two so far, I've been able to say some things I haven't been able to say in my standup, especially with the character of Sally and her arc. But, gosh, writing jokes for Henry Winkler to say has got to be the biggest perk, because he's just such a sparkling wonderful actor.

There are real stakes for the characters in Barry because sometimes they get murdered on the show. How does that change how you approach writing for the show? Or does it have an effect on how you approach it?

From the start, everyone was very clear that they didn't want the violence to be cool, or a joke, or lighthearted, and that really appealed to me. I'm horrified by violence, and especially now, I didn't want to work on a show that doesn't take its effects seriously. Things have consequence. I love that.

The show definitely has its sillier moments, even with the crime and violence stuff, but what I love is that it is really grounded about the stuff that's important, and it takes seriously the idea of trying to be a good person and what that entails. Those are things I think about a lot anyway, so it's exciting to be able to get paid to do it, too. Be on the lookout for Emily Heller's latest standup special, No Men Allowed - (Kinda!!).
Kim Newmoney
What's something the average viewer really should know about writing for TV as a female writer and comic?

I don't know if there's anything the average viewer should know about writing for TV as a female writer and comic. But I do wish more people knew how collaborative TV writing actually is. Very few things in a script end up in there without a roomful of people talking about them first. Being a woman and a comedian in that room just means I have a lot to bring to the table when it comes to phrasing jokes or figuring out how our female characters might react to stuff in ways that are different than what the male writers think. I'm good at my job! Is that an answer?

Yes, it is. In your High Plains Comedy Festival bio, your preferred nickname is "Hell Bone." Perhaps you could provide some insight?

My last name is Heller, and for some reason the combination of that and me being a comedian makes people think they need to come up with some pun as an ice breaker (Emily Hella, Emily Heller High Water, Hells Bells, etc.). Do not do this. Hell Bone. It's Hell Bone. Ask any karaoke DJ I've ever written my name down for. Thank you very much.

Emily Heller will be performing at Laughter Hours at 10 p.m. Friday, August 24, at Mutiny Information Cafe, 2 South Broadway; find the complete schedule for the High Plains Comedy Fest here.
KEEP WESTWORD FREE... Since we started Westword, it has been defined as the free, independent voice of Denver, and we'd like to keep it that way. With local media under siege, it's more important than ever for us to rally support behind funding our local journalism. You can help by participating in our "I Support" program, allowing us to keep offering readers access to our incisive coverage of local news, food and culture with no paywalls.
Make a one-time donation today for as little as $1.